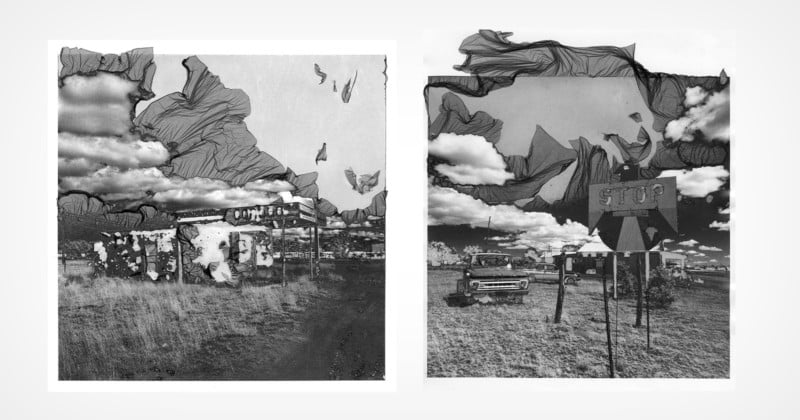 A photographer has documented the disappearing American West using a unique alternative photographic process called Mordançage which gives the finished images a surreal and ethereal look.

When J. Jason Lazarus, an Alaska-based photographer and educator, first started showing his work at a local gallery space about 15 years ago, he realized that the effort he puts into his darkroom printing is not always recognized. People browsing his work would often presume that his silver-based prints were digital black and white images, not hand-printed by the photographer in a darkroom.

Lazarus tells PetaPixel that, although he enjoys shooting and printing digitally when he creates work in the darkroom, he wants that element of the image to be called forward.

“Even though the processes I use are rarely intertwined with the actual concept behind the work, I enjoy getting my hands dirty and like it when some of that workmanship shines through,” Lazarus says.

“Whether that’s the brush strokes on the edge of a Cyanotype print, the handmade texture of the watercolor paper peeking through, or the accidental thumbprint left behind on a Lumen print, those imperfections are a bit of the artist in the final print and a great story for a client that may want to know more about the image and process.”

His interest in alternative processes began when he started pursuing his MFA in Photography through the Academy of Art University in San Francisco and Lazarus started challenging himself to learn these antiquarian processes. He spent time teaching a few of the processes himself, as well as relied on the university’s alt-pro courses to learn others, and also began a mentorship under Christina Z. Anderson. The latter, Lazarus reveals, completely changed his perspective and understanding of “the hidden complexities behind truly mastering some of these processes.” 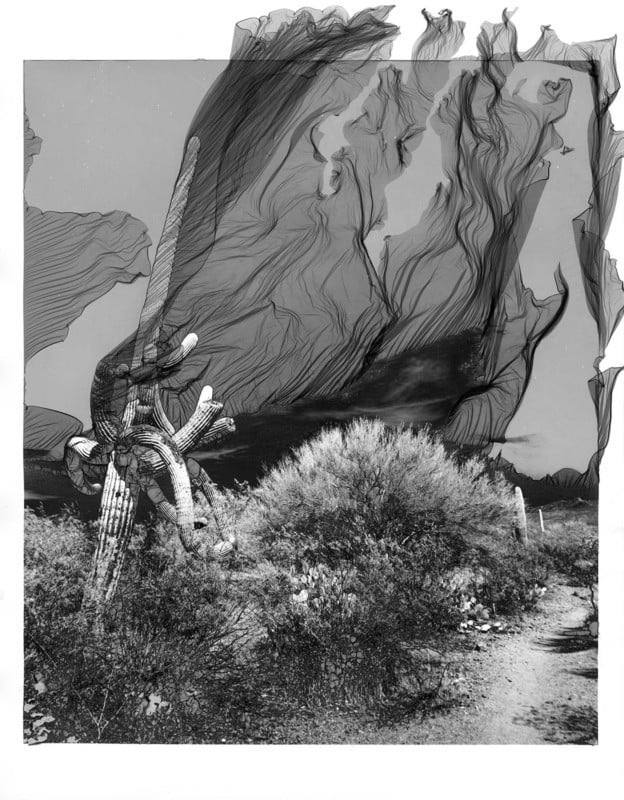 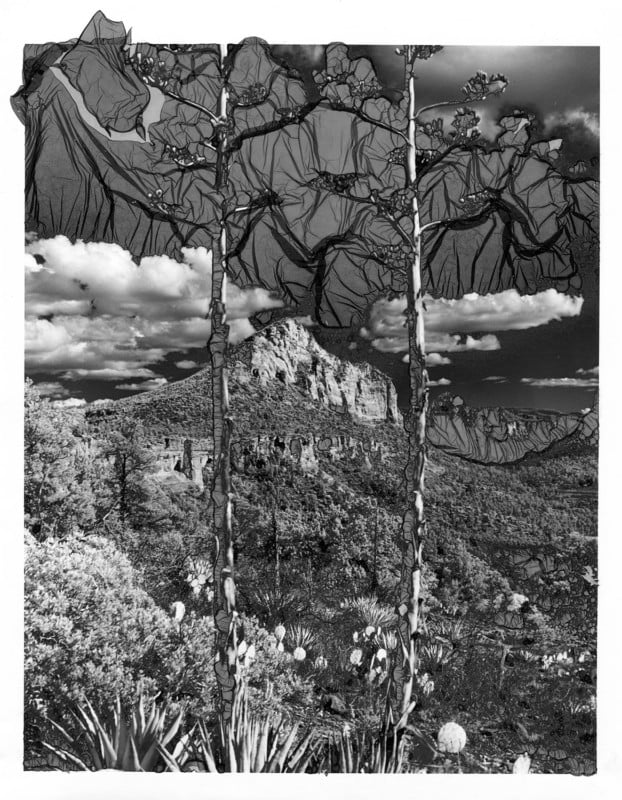 The idea of the project, titled “The Westward Consumption,” arose naturally during the hands-on process. Whilst waiting in the darkroom for images to expose or for prints to process, there is a lot of time that can be spent on thinking, brainstorming, and processing ideas and thoughts. Combined with Lazarus shooting new material in the American Southwest, it gave him a reason to pursue this project.

“You start thinking about what sort of imagery works best with the process, how you can use and manipulate the process to encourage a story or theme, and then, if it’s something you’re keen on developing, your passion for the subject matter fills in the rest of the blanks,” he explains how his projects originate. Although any planning prior doesn’t completely eliminate “misfires, failures, and restarts.” In fact, Lazarus welcomes them as an important part of the learning process as well as that of creative exploration.

The initial traces of the project started around four years ago, when Lazarus shot infrared (IR) film with his medium format cameras and enjoyed the unique, alien-looking landscapes that it created. He created a selection of IR landscapes — although without an underlying concept or theme at the time — and shelved them for a couple of years. This body of work was later resurrected in 2019 when he had to test out some Mordançage chemistry for a workshop. Simultaneously, he realized that the black skies in his IR landscape shots gave him the necessary tones to start experimenting with the fragile veils that the Mordançage process creates.

The way this technique begins is with a bleaching process. The darkest areas of the print’s emulsion lift, creating very fragile veils that can be moved and manipulated with paintbrushes and the gentle flow of water. The print is then washed thoroughly, reprocessed through developer and fixer, and then washed thoroughly again. While transferring to each of the separate baths, utmost care must be employed, as the veils tend to carry a lot of water between them and the print’s paper backing, making them heavy and easily spoiled.

An image isn’t ruined if one rips — in fact, a lot of photographers rip them on purpose for a creative result. However, photographers have to be willing to change the intended outcome of the image drastically if they are careless or rushed. Lazarus also employed this unique characteristic of the process by allowing the veils to burst — which adds an additional dimension to each print — as it creates an impression that the landscape is “quite literally falling apart.” After working on this process for some time, Lazarus realized that perhaps this is something special to continue working on for his project.

Each individual Mordançage print takes him about five hours to create, from loading up the negative in the enlarger to final print. He only spends about one hour on his initial black and white print, one-hour processing it through the various chemicals and washes, and two to three hours manipulating the veils in the final rinse. 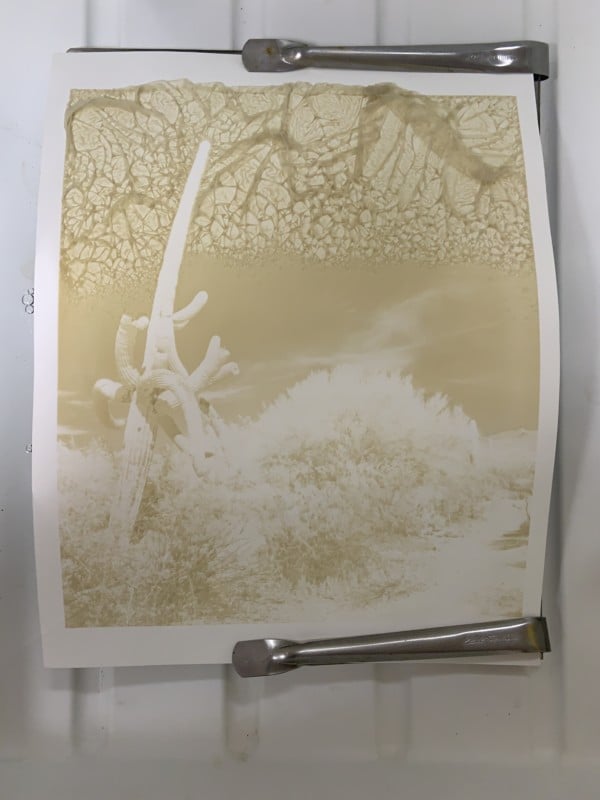 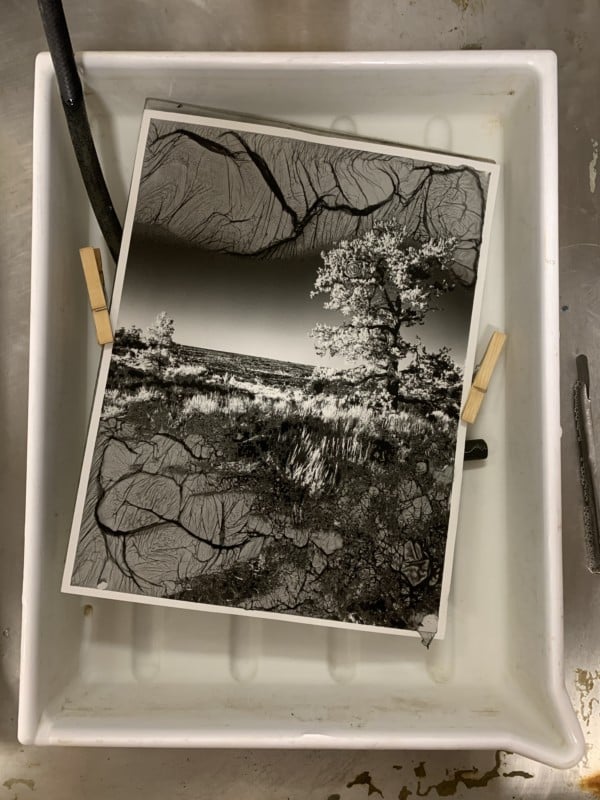 As this type of process uses a traditional fiber-based darkroom print that is then bleached in a fairly toxic mixture of chemicals, Lazarus urges anyone interested in this technique to first attend a workshop to learn in a safe environment. If the chemicals are mixed incorrectly, the process can create chlorine gas. It is important to follow safety procedures and to wear appropriate gear to enable safe handling of the chemicals, which, Lazarus points out, can and will eat through metal.

Overall, anyone who tries their hand at delicate processes like these has to be prepared and willing to go where the process takes them, with any imperfections that may arise. “The more you make this creative process a conversation between you and what the process is willing to grant you, the more successful you will be,” explains Lazarus. “If you’re used to controlling every variable, Mordançage might not be for you — although if you can relinquish some control, it can be an incredibly rewarding experience.”

Having said that, Lazarus recommends all artists get their hands dirty and try alternative and historical photographic processes hands-on. Immersing oneself in a different way of creating can provide a different perspective on the process, especially for those who have grown up familiar only with digital work. 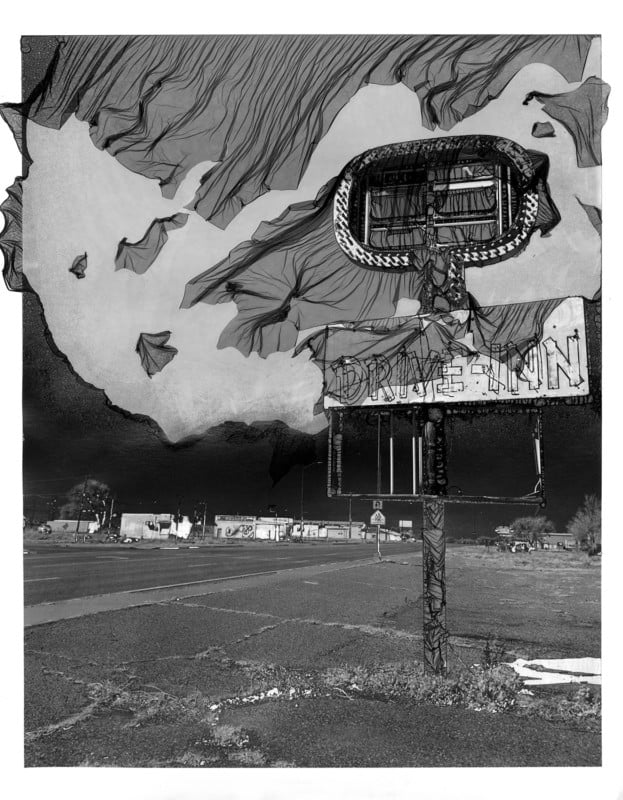 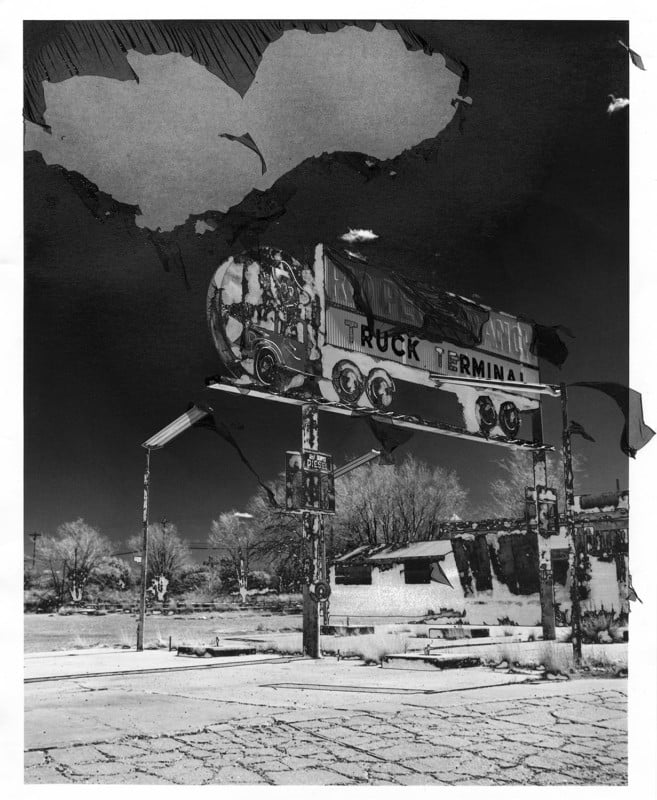 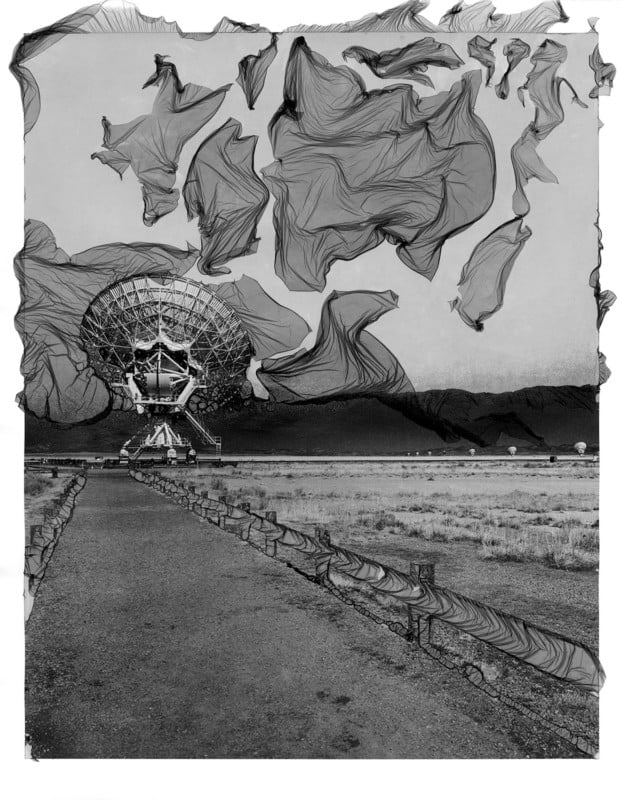 As complex as the technique is, the shooting stage hasn’t always been easy either. Working with IR requires strong sunlight for maximum effect, which means overcast days are out of the question. Lazarus is also required to shoot through an R72 filter — that decreases the light striking the film by five stops — and needs to shift his focus slightly, too.

As for the imagery present in the project, most of the early work was captured on or around Route 66 with the initial project focused on this “disappearing slice of Americana.” The more he traveled around the American West, and the more he explored its history, Lazarus realized that the neglect on the Route 66 was “just part of a much greater problem of land misuse throughout the region.”

This was the moment when Lazarus shifted the focus of his series away from just documenting Route 66 to photographing the scenes that define this continued development of the land and what is in danger. “Whether nuclear dump sites, failed power stations, ceaseless urban sprawl, toxic mining remnants, they all represent failed experiments toward progress that now taint this once pristine landscape — and what hasn’t been touched is under increasing danger from fires and floods caused by climate change,” says Lazarus.

“Iconic historical photographs of the region have defined it as an unspoiled paradise, so vast that crowding, pollution, and overuse are unfathomable. These early images, along with the ideals surrounding ‘Manifest Destiny’ encouraged each successive generation to reap the benefits of the land without regard, leaving hundreds of years of detritus littering this vast region — while saying all of it was done in the name of ‘progress.'” 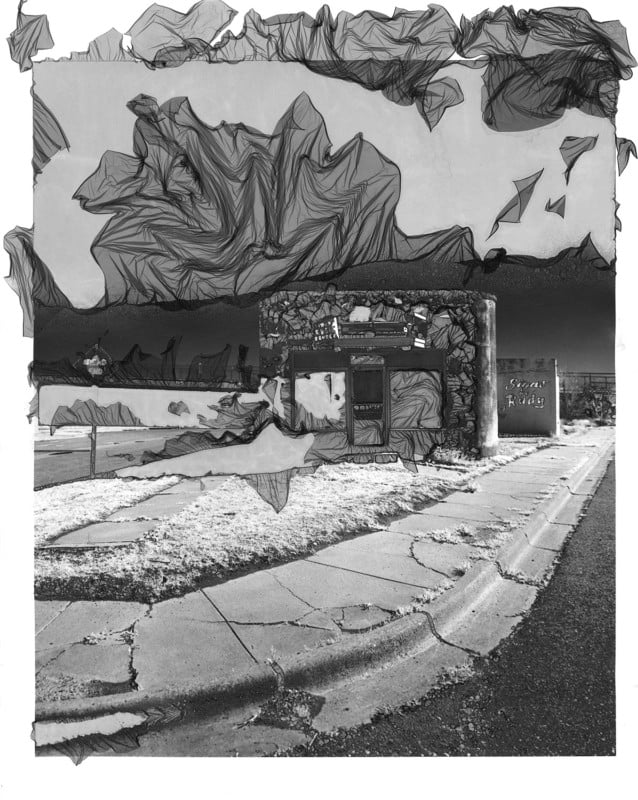 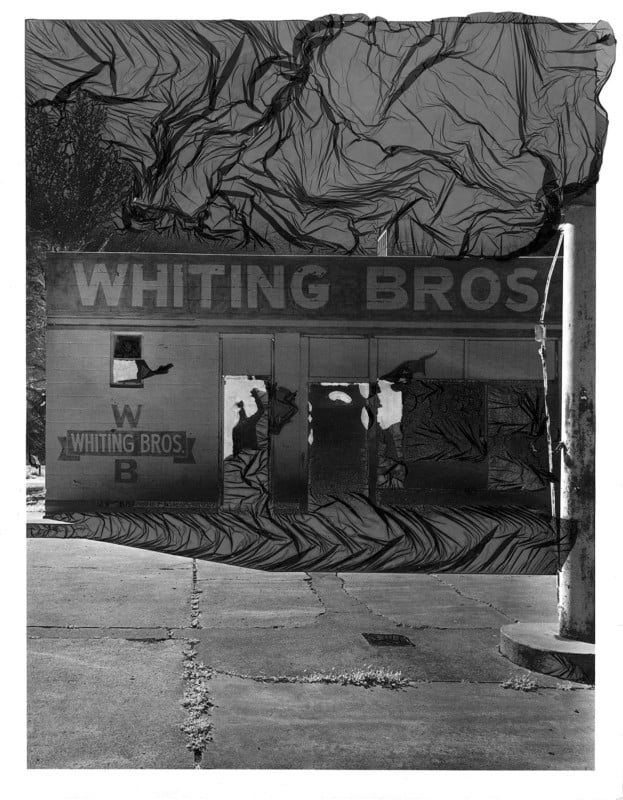 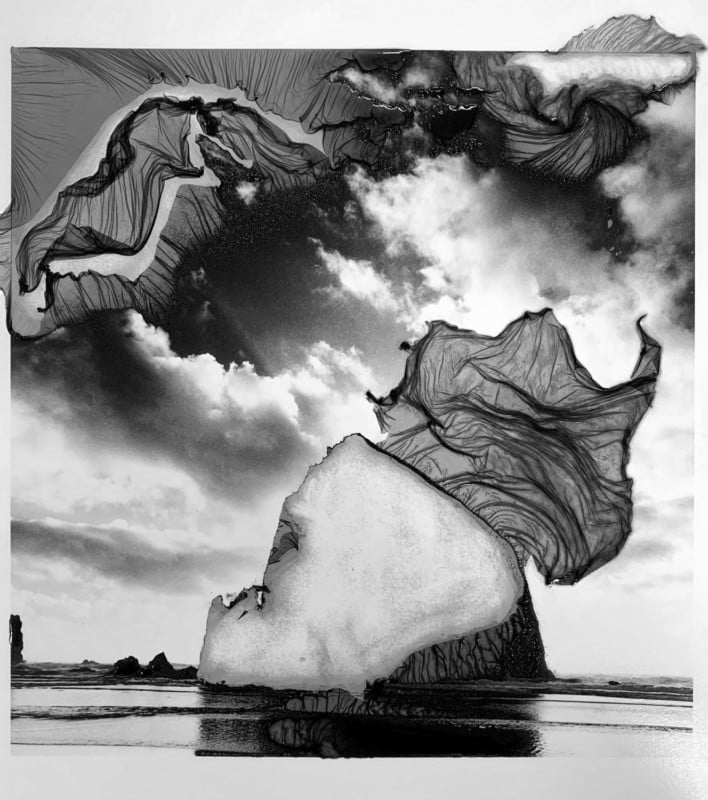 The resulting body of work is intended not just to challenge what the people define the American West as, but to also show where this neglect of it has lead to.

“Much like the Mordançage processes’ veils suggest, the American West is going up in flames, crumbling at our feet, and disappearing in the wind,” he says.

More of Lazarus’ photography, including a variety of projects using alternative processes, can be viewed on his website and Instagram.

Image credits: All images by J. Jason Lazarus and used with permission.