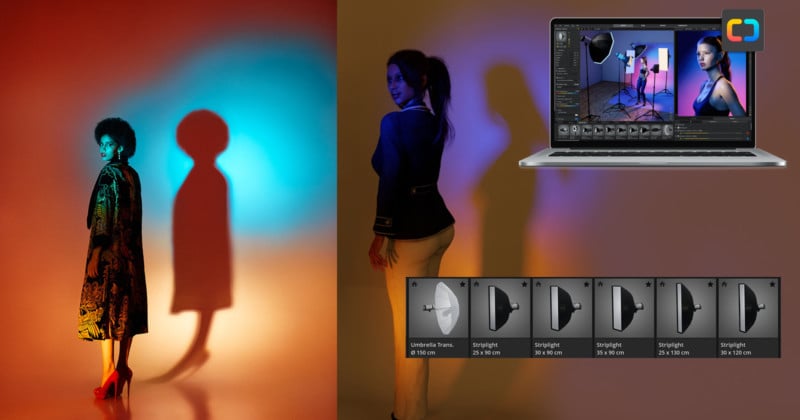 Lighting is one of the most complex topics in photography. There are literally hundreds of light shaping tools and countless scenarios they apply to. No wonder many photographers are reluctant to learn lighting, despite it being one of the core skills any photographer should have.

One of the best ways to learn to light is by far getting in the studio and experimenting. Albert Warson recommends starting with a bare bulb and a friend on a chair. There’s a lot a bare bulb flash can do. Yet, true creative freedom comes only when a photographer is well versed in all light shaping tools.

Being able to recognize and apply the exact light shaping tool that’s needed is paramount to a successful image. Of course, that knowledge can only be created by experiencing the light shaping tool over and over again. While some have access to rental houses that store everything from a Profoto Hardbox to a white umbrella, others may not.

One way to learn light without going to great lengths is by 3D visualizing it. set.a.light 3D is a program for both Windows and Mac that does just that. However, does it live up to what it promises, and are the visualizations really accurate? I took the trial version of set.a.light 3D for a spin and found out.

Getting To Grips With set.a.light 3D

The UI is quite complex and there are a lot of different features to pay attention to. However, there is a trove of YouTube videos that its developer, Elixxier, made that show how to setup up. With their help, after a few rounds, it becomes quite intuitive to use set.a.light 3D.

Upon launch, you can choose to name your project and where to store it. Afterward, you’ll be prompted to pick a studio space you want. The ability to create custom studios is very helpful when it comes to pre-visualizing results and checking if that particular studio has enough distance and space for everything that’s needed.

Given that wall colors can cause a tone shift in the whole photo, there is even the option to select different color walls in the studio space. Sure enough, a red ceiling will shift everything towards red. The ability to control small intricate details such as that is a huge benefit to photographers looking for accurate pre-visualizations of their light for a job

Once you’ve set up the studio you can move on to getting lights, models, and the set ready.

When it comes to models there’s a selection of different ages, skin tones, and nationalities.

Afterward, there are over 25 different hairstyle options, a few hair color options, as well as different outfits to choose from. To top that off, eye color, skin hardness, tone, and makeup are also present. Overall, there is a lot of control over how the model looks. Anything from what underwear they have to how closed their eyes are. 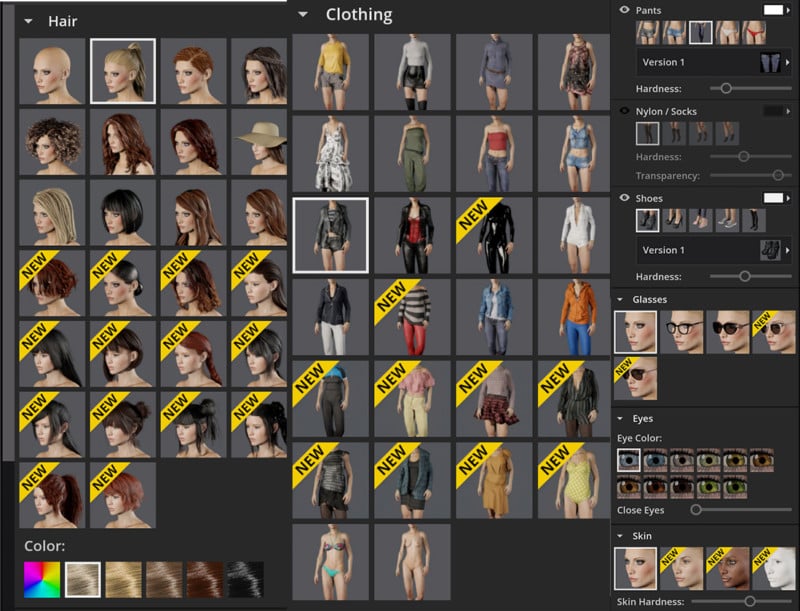 The posing mode allows to dial in the exact pose the mode should take. Each joint has a 3D control option plus there’s a different mode where you can select a body part of the model and move it as desired, this mode will also move relevant body parts making for a much more natural pose when compared to the 3D-joint movement. 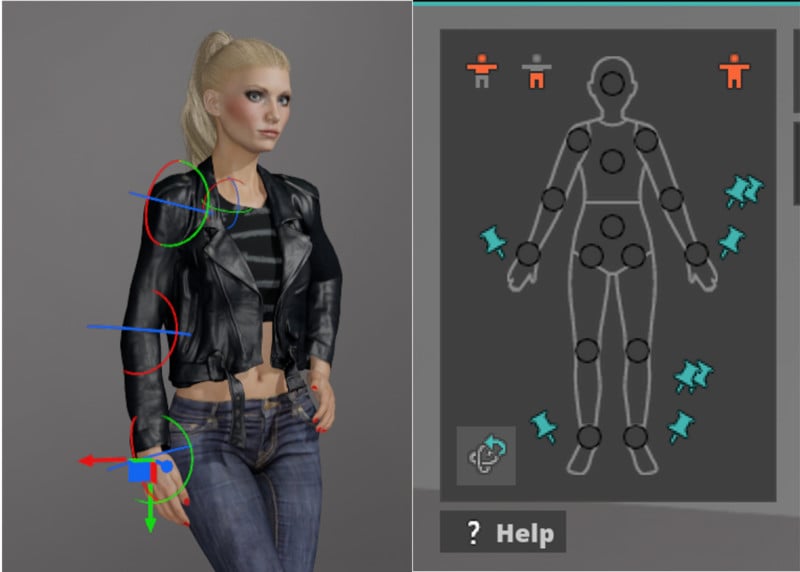 Plenty of light shaping tools are available. They can be used in combination with grids and gels. What is more, softboxes can have their inner and outer diffusers removed. The parabolic modifiers that are available don’t feature a rod moving function rendering them a little unnecessary as the main benefit of parabolic light is the ability to focus it as desired.

You can also cut, diffuse and reflect light with tools available in the Helper section.

Different permalight options are available with plenty of branded lights to choose from: From a small ring light or Spekular tube to Arri M90 9000W light.

Here is the computer setup I tested set.a.light 3D on:

Once set.a.light is opened, that changes

Overall the program is a bit laggy on the current setup, once you are a few lights, props, and more, it tends to slow down. Although it’s nothing unusual it still suggests that you may want a very powerful computer in order to run set.a.light 3D seamlessly.

set.a.light is feature-packed and those features are very useful. They claim that radiation behavior is emulated from the real-light data that they developed. However, how well does set.a.light simulate what real-world results look like?

I used 3 different light shaping tools to test that: A 3’ Octa, a bare bulb flash, and a large white umbrella.

This test is a bit odd, mainly because there is no bare bulb option in set.a.light. This does come as a surprise to me, as bare-bulb flash is often used on location and in-studio when bouncing light for the soft quality. 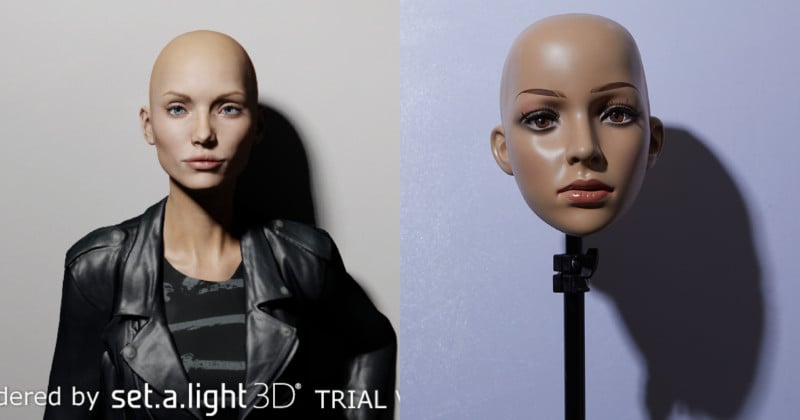 The shadow edges are very well reproduced, with little differences between them. The major difference is however in shadow depth. Having used a white background, albeit mine is more reflective, I was still expecting some bounce back to the model. Instead, the shadows are pitch black on set.a.light. Naturally, when using a white background, there is color cast from it. Take this for example: 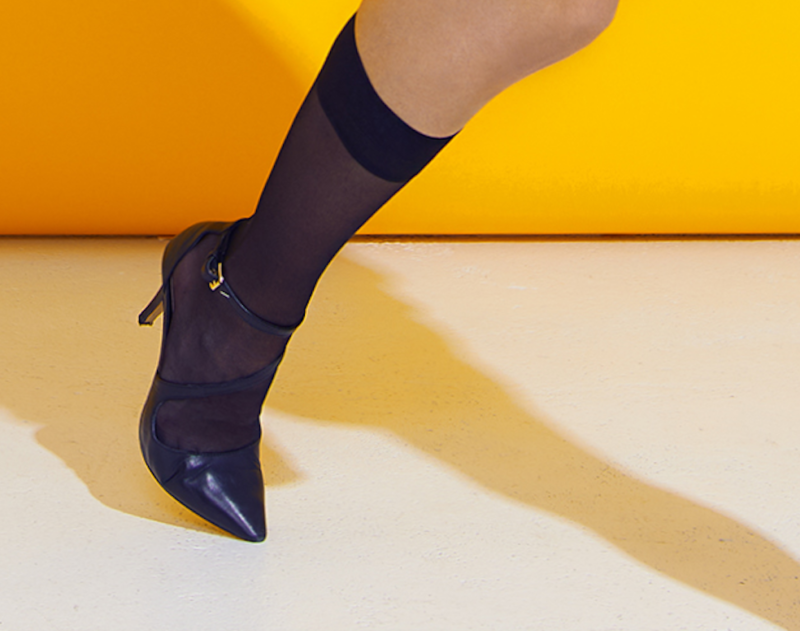 The 3ft octa gave very similar self-shadow edge quality as well as the thrown shadow quality. The thrown shadow or the one you see in the background is diffused and egg-shaped as would be expected. The columella shadows have the same quality as well. As for catchlights in the eyes, they are accurate, albeit the nose shape altered it. 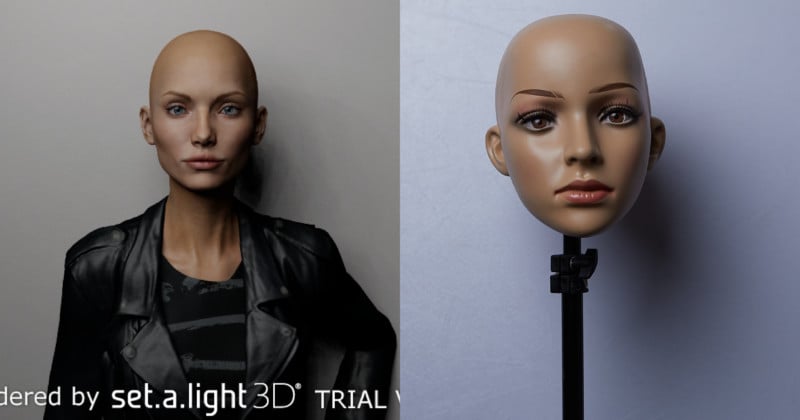 I like to joke that I don’t own enough light shaping tools. I clearly don’t. There is only a 180cm and a 150cm white umbrella. I chose the 180cm version, as it is closer to the truth in my opinion. The greater the size of the modifier the less difference there is. For example, a 165cmm and 180Cm umbrella will produce similar quality light when compared to a 60cm and 75cm softbox. The percentage difference between the two values is smaller. 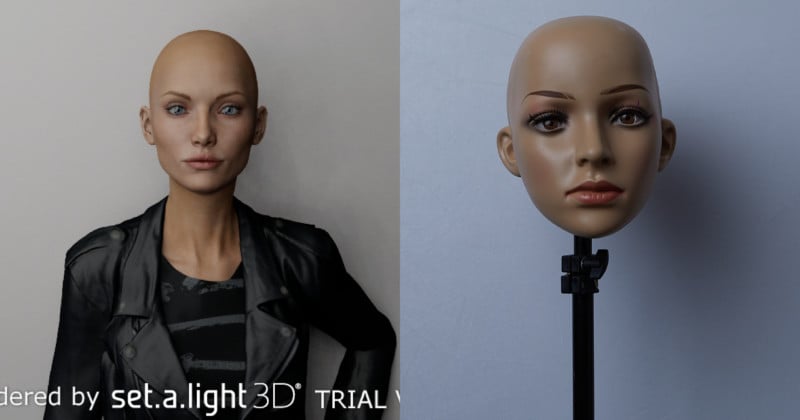 The thrown shadows are quite different, which leads me to believe that set.a.light is not too great in this single case. The penumbra(shadow edge) width is also considerably wider with set.a.light. Although one can claim that this is simply due to size differences, I would disagree.

set.a.light 3D is overall a great app that delivers mostly accurate results. I see myself using this for pre-visualization for certain commercial assignments. This also comes as a great teaching and coaching resource.

Often, when I converse with photographers on light, art, and more, I end up showing my work where instead I would prefer to show a real light setup, break it down and really dive deep into how it works. set.a.light is also for beginners, it allows to play around with different lights without taking too much effort or time.

Overall, I had a positive experience with set.a.light and this is something that I will be adding to my fleet of nifty photography apps. I suggest picking up the Studio version as it has more capability than the normal one. set.a.light clocks in at $183, making this a chunky but worthy investment.