A New York photographer planned and sketched in great detail a solar eclipse photo he wanted to capture ahead of the event, and managed to match that plan perfectly in his finished image.

Julian Diamond, based in Dutchess County, New York, is a photographer with a life-long interest in meteorology and astronomy. Practicing his photography in New York’s Hudson Valley — which he describes as “a fascinating area at the threshold of urban New York City and the largely untamed interior of North America” — Diamond is reluctant to put himself solely in the box of landscape or nature photographer, as he believes his work emphasizes utilizes skills that range across multiple disciplines.

“I can photograph the core of the Milky Way just 90 miles from New York City, raising awareness of both the beauty of the night sky and the threats posed to it by poor lighting practices,” Diamond explains as a way of describing his way of pursuing photography and finding purpose in it.

With a love of the cosmos, which has influenced his creative journey, Diamond spends a lot of time viewing and photographing celestial phenomena, such as eclipses.

“I’ve seen several partial solar eclipses in the past, and in August 2017 I was fortunate enough to experience totality for the first time,” he tells PetaPixel. “That occasion really brought eclipses to the forefront of my astrophotography studies.”

The most recent solar eclipse shoot, however, attracted attention en masse on Twitter after Diamond shared his hand-written notes and sketch for the shoot he prepared ahead of taking his photo alongside the final result. The photograph is part of a long-term project focused on capturing astronomical objects together with the historical forest fire lookout towers of New York State.

The plan The shot pic.twitter.com/aIvQ9K5KxZ

Diamond explains he believes people found his Tweet compelling because of the analog method he used in the final stage of planning.

“My notes are far from perfect or elegant — I had no idea they’d be seen by 3.4 million people! — but laying out my figures and sketching my composition like that afforded me both the precision and intuition I needed for a successful shoot,” he says.

The initial preparation for this shot began early in 2021 when Diamond determined that this photo would be part of his fire tower series. He tells PetaPixel that in his spare moments he would toggle between Google Earth and the Photographers’ Ephemeris to check a couple of fire towers at a time that could be suitable. He says that after seemingly exhausting the list of sites in the region without an obvious lead, he followed a hunch and started pursuing vantage points for his favorite local tower, which sits atop a modest elevation called Stissing Mountain.

After three trips of scouting out the location, he found a clear line-of-sight through “the most tenuous gap in the trees” at a park, which was just enough to accommodate the tiny field of view. Although Diamond determined that there was no margin for error, the park has strict hours of operation, which wouldn’t permit early entrance. To resolve that, he got in touch with the local government officials to request off-hour access, and, luckily, they were already familiar with his work and granted access, albeit with certain ground rules. Diamond arrived at his pre-determined location with plenty of time to spare to run through his equipment checklist and noted some thin high-altitude clouds which made for a colorful sunrise, with a little mist that had settled over the meadows. To Diamond’s relief, the Sun made an appearance above the horizon, “in the striking shape of a crescent,” exactly where he had envisioned it. To add to the perfectly planned shot, Diamond had wished to see and add a small human element to his photographs. As he looked through his viewfinder, he noticed a group of early-risers climbing the steps, below, approximately 3.7 kilometers (2.3 miles) away, giving the photographer exactly what he had hoped for. 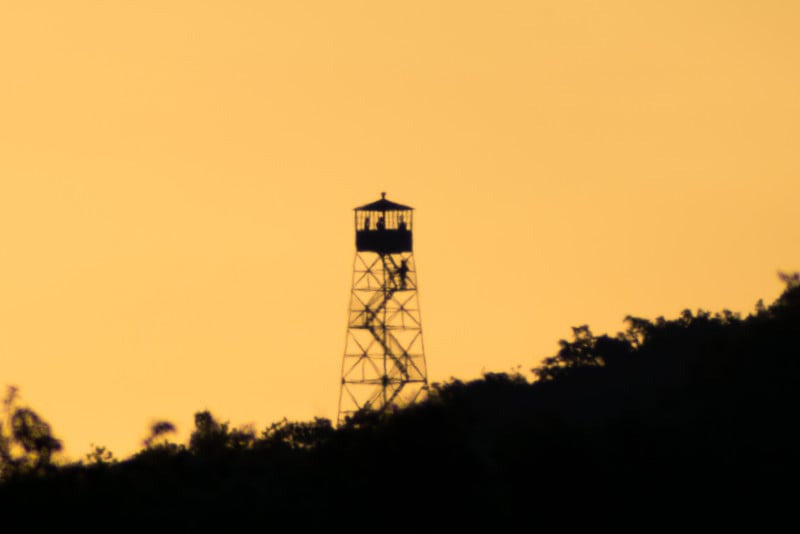 All of these small successes contributed to the final shot that just about perfectly matches his pre-production vision. The only challenge that came his way was the anticipated exposure which didn’t quite work.

“Those thin clouds from earlier, combined with the Sun’s low altitude, dimmed the solar disc a bit more than expected,” he explains. “A couple of test shots and corresponding tweaks resolved the issue just before the Sun arrived at my desired spot.” 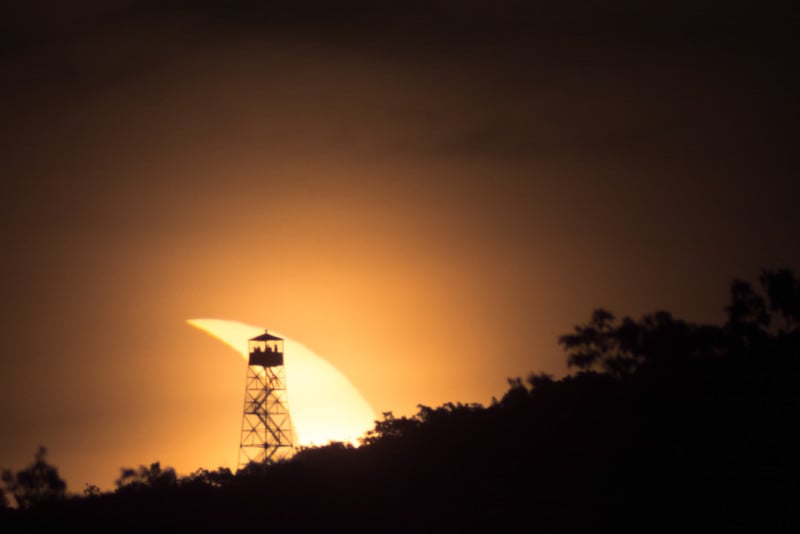 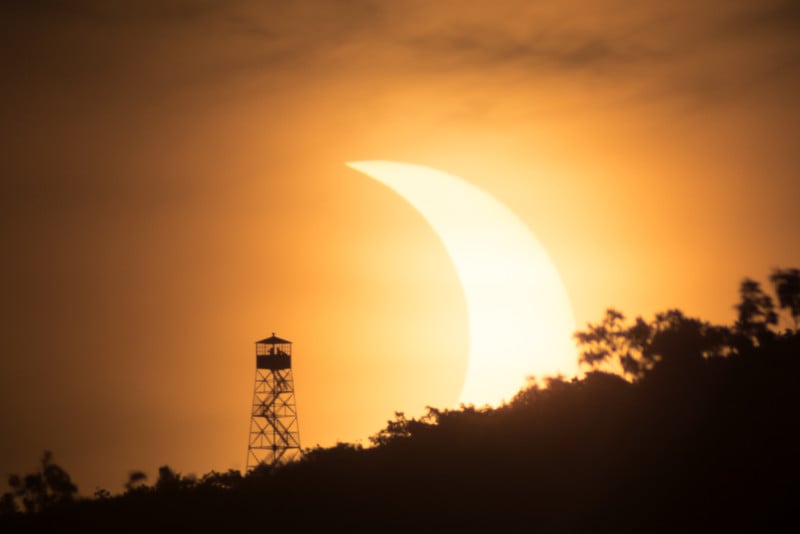 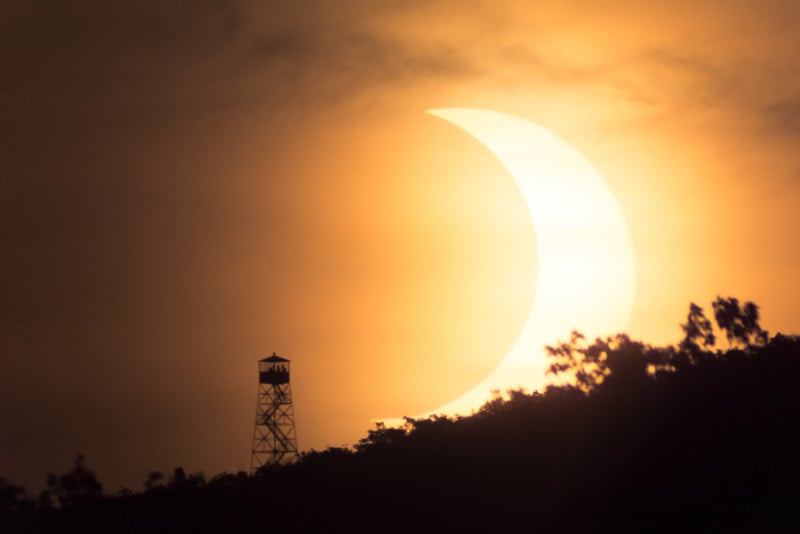 Besides the most recent eclipse shot, the project has helped Diamond create one of his most prominent photographs: one such tower silhouetted against a full moon, while the most challenging variation on this theme so far features a shot of Jupiter and the four Galilean moons.

Although he says he welcomes advanced methods of photography and post-processing, in his work Diamond strives to create images with a single exposure.

“I just find it especially satisfying when I’m able to tell curious viewers, ‘Yes, this is how it looked through my viewfinder,’ no disclaimers or qualifiers needed,” he says.

Diamond encourages other photographers to seize any opportunities that may come along. Several of his friends decided not to wake up early for this event on the basis that “it was ‘just’ a partial eclipse, not a total one.”

“[That is] a distinction that astronomers and eclipse-chasers take great care to emphasize — and now regret that decision after seeing the many dramatic, inventive photos captured across North America,” says Diamond.

“While it’s true that totality is an experience without parallel, partial eclipses still inspire awe, and they can still be used to create captivating images. In fact, my photos from last week’s partial eclipse have proven vastly more popular than anything I’d captured during my first total solar eclipse in 2017. Back then, the position of the obscured Sun high in the sky made it very challenging to incorporate an interesting foreground,” Diamond explains. “By contrast, an eclipse near the horizon opens up a world of potential compositions, especially with long lenses. My words of wisdom for the next one, then, are to not let the next one pass you by.”

Image credits: All images by Julian Diamond and used with permission.