The Slow Mo Guys tested out the new Phantom TMX 7510 — the fastest Phantom yet — by capturing a slow-motion close-up video of a spark plug breaking a car window at an incredible 800,000 frames per second.

The high-speed Phantom TMX 7510 camera, used in the video, was launched just earlier this year by Vision Research. At just one megapixel of resolution, the camera can achieve a whopping 76,000 frames per second. But to go even further beyond, the resolution can be reduced which can push the camera to record even faster speeds and produce some incredibly smooth slow-motion shots. 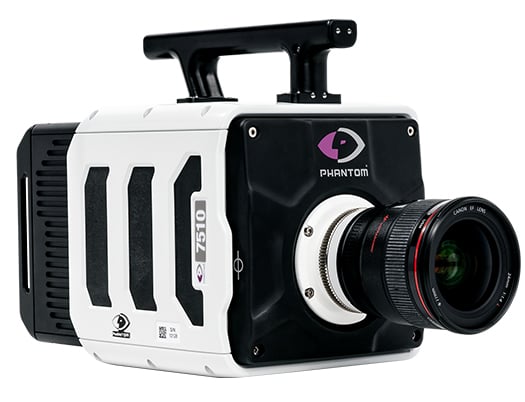 The appropriately named Slow Mo Guys YouTube channel creates videos that show its viewers various experiments in slow motion, from a video that shows how a tranquilizer dart works in slow motion to a video that shows how the Apple watch ejects water, and everything in between. For the first time, Gavin, one of the creators behind the channel, had the opportunity to shoot with the fast Phantom TMX 7510 and pushed the camera to its limits while experimenting with impact on windows caused by a spark plug.

Capturing footage of a breaking window isn’t an easy task. The action happens extremely quickly and not much detail is captured when shooting at the camera’s full resolution. However, Gavin demonstrates the final result shot at a lower resolution which gives more flexibility with the increased frames per second.

At 82,000 frames per second, the impact of the spark plug can be seen in great detail as the window breaks from the point of contact and travels towards the edges, similar to ice cracking. The light that’s pointed at the scene illuminates all the cracks as the damage travels across the window.

Gavin further reduced the height of the resolution, which results in an increase in the speed and finishes the experiment by shooting at a blistering 800,000 frames per second and an exposure time for each frame of around 600 nanoseconds. The reduced resolution consequently means that the final footage is shot in an even smaller letterbox but it gives the opportunity to see the impact at an even slower speed as it moves from left to right, which for the final clip is 32,000-times slower. While resolution is not its strength at these framerates, the detail of motion makes up for it.

Although pricing information for this high-speed camera is not publicly available on the Vision Research website compounded by the lack of competition in this niche, it can be assumed that it is not an affordable piece of equipment for the everyday consumer whether it is rented or purchased. However, to watch slow-motion footage in the style that the Slow Mo Guys produce is always riveting, especially when cameras like the Phantom series can deliver smooth footage of it in such detail.

To see more of The Slow Mo Guys video experiments make sure to subscribe to their YouTube channel here.