An urban history expert recently purchased vintage photos of New York City on eBay and followed several clues that led him to determine the exact month and year the images were taken.

Jordan Liles of Jordan Liles Films is a United States-based photographer who specializes in recovering history. In 2019, Liles made a purchase of three vintage photos on eBay of unknown origin which he says appeared to be from the same album and set himself on the challenge of finding exactly when the images were captured. His goal was to at least narrow it down to a range of years, but would try to get as specific as to specify a month and year if possible.

The photographs were slightly worn from years of improper care and neglect but, when scanned, Liles realized they were higher resolution prints than he had first thought.

The first image features the Brooklyn Bridge accompanied by a handwritten title and shows snow on the ground along with a few pedestrians that are walking away from the camera in the distance. The second photograph, titled “N.Y from Brooklyn Bridge,” shows an urban landscape view as seen from the bridge and overlooks the city. The third photo, titled “Broadway N.Y.,” shows a man walking through a park with a few pedestrians in the background. 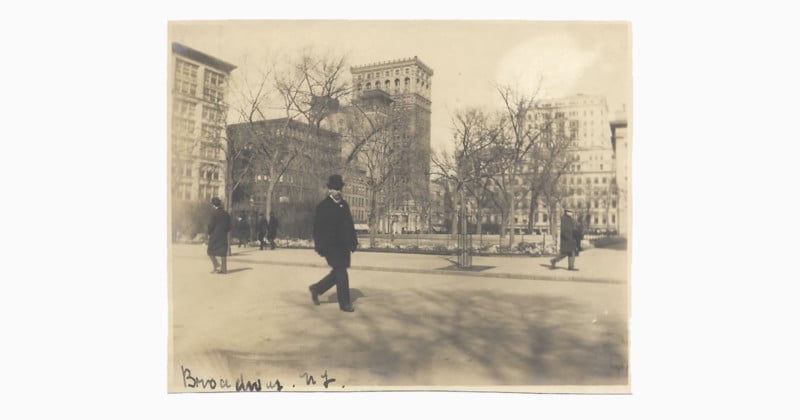 Lyles started with the handwritten titles, which he believed indicated that the author was a tourist as opposed to a local who would have been deeply familiar with these locations and would therefore not need to label them. Additionally, he focused on the business name and address that was painted on a building in the background which he used to reveal information about the range of years the business operated in that exact location and consequently, the range of years the three images were taken.

All of the photos were taken in locations close to each other, and Liles speculates that they could have been captured just within a few minutes by also taking into account the shadows cast by objects, like trees.

Lile’s YouTube video explains in detail every clue he used to determine that he believed these photos were likely taken in November of 1904, although he admits that you can never know for sure, especially because the eBay seller hadn’t provided any information. In regards to the author of the photos, Liles guesses that it could have been a younger person who might have used a 4×5 plate Companion Camera.

Either way, scanning the old photographs revealed a lot of detailed information that the history expert hadn’t anticipated and it provides a brief yet fascinating insight into the history of the city, similar to what Liles shares with viewers through his documentaries and historical visuals, such as “The Sidewalks of New York” and “New York Now and Then.”