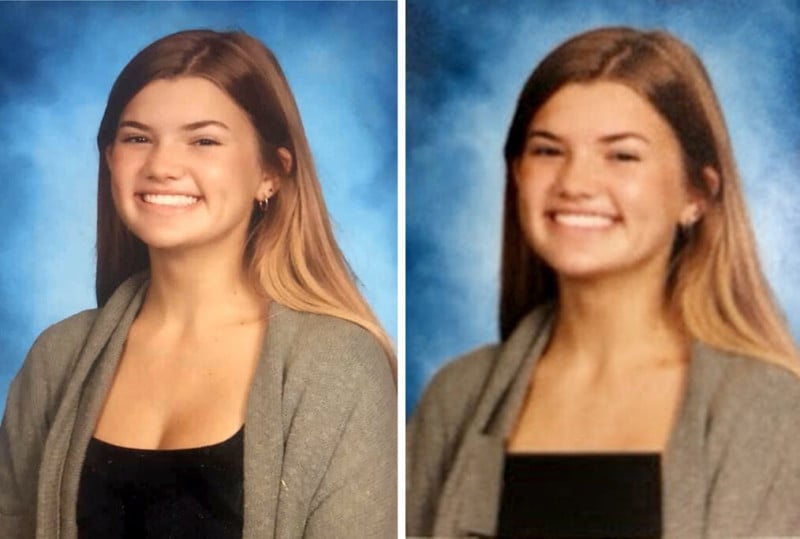 A high school in Florida has sparked outrage after it was discovered that at least 80 female students had their photos digitally edited in the yearbook to hide their chests and shoulders.

The New York Times reports that students at Bartram Trail High School in St. Johns County were in disbelief after opening up the latest yearbook and finding the bizarre “Photoshopping” on photos of themselves.

Riley O’Keefe (shown above), a 15-year-old ninth grader at the school, found that a straight black bar had been overlaid on her clothing to cover slightly more of her chest. Many other photos of girls in the yearbook found similarly clumsy changes to their portraits.

Another 15-year-old ninth grader named Brooke found that a square section of her plaid shirt had been cut and pasted over her chest.

All of the edits were done to female students, despite the fact that one of the photos featured boys on the swim team wearing Speedo bathing suits.

All of these photos appeared in the Bartram Trail HS yearbook, but only 1 was digitally altered because the yearbook coordinator believed it violated the student code of conduct. In total, 80 photos were "adjusted" in the yearbook, all featuring female students. #News4Jax @wjxt4 pic.twitter.com/j1YCblxjjE

The public high school’s website states that yearbook photos “must be consistent with the St. Johns County School District Student Code of Conduct or may be digitally adjusted.”

The St. Augustine Record reports that a teacher who serves as the yearbook’s coordinator was the one that decided that the photos broke the dress code and that she did some of the editing herself.

After the initial shock and amusement, both students and parents became furious at the edits that were done without their consent. They are now demanding an apology from the school and a reprint of the yearbook without alterations. Some students say the edits made them feel sexualized, exposed, and ashamed, the Times reports.

The school district has since released the following statement to media outlets:

Bartram Trail High School’s previous procedure was to not include student pictures in the yearbook that they deemed in violation of the student code of conduct, so the digital alterations were a solution to make sure all students were included in the yearbook. At this point the school is offering refunds to any parents calling about this issue. The school is receiving feedback from parents/guardians/students on making this process better for next year.

For some students, the controversy now is about much more than a single yearbook photo.

“The double standard in the yearbook is more so they looked at our body and thought just a little bit of skin showing is sexual,” O’Keefe tells Action News Jax. “They looked at the boys, for the swim team photos and other sports photos and thought that was fine, and that’s really upsetting and uncomfortable.”

News4Jax reports that the school previously came under fire a couple of months ago after teen girls were taken out of class, sent to the dean’s office, and told to change clothes or face suspension. An online petition started after the incident collected over 4,000 signatures from community members demanding change.

According to district figures seen by News4Jax, student dress code violations have surged in the latest school year, and 78% of the violations are given to female students.