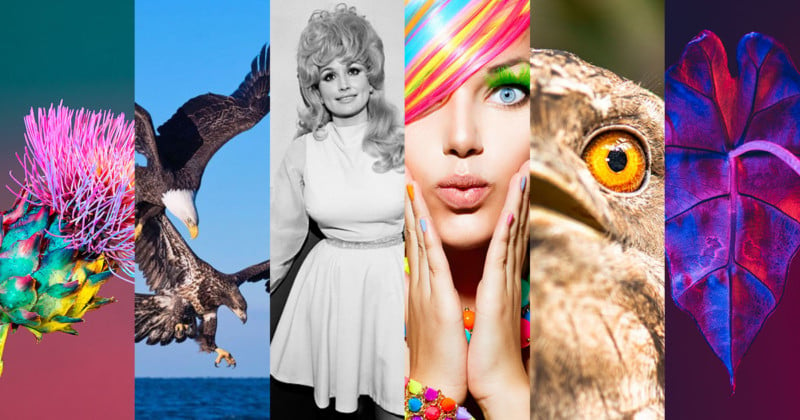 I turned to photography at a young age as a way to manipulate the world in front of me and create endless possibilities. – Lindsey Rickert

Lindsey Rickert is a photographer from Portland, OR, who likes to work with bright colors from products to portraits.

“The best thing about my job is getting to meet a wide variety of people,” says Rickert. So obviously, the pandemic got her feeling lost and disconnected at the sudden inability to photograph or be near people. This gave birth to a project photographing plants, flowers, and vegetables all colored in-camera with gelled flashes. Prints of the series are available in Rickert’s shop.

Phil Mistry: How did you come up with the idea for Otherworldly Botanicals?

Lindsey Rickert: It was a series born at the start of the pandemic. I found myself feeling lost and disconnected at the sudden inability to photograph or be near people. Searching for a creative outlet to help me cope, I looked out my window one afternoon to see my Four’ O Clock plant had started to bloom.

These beautiful flowers bloom in the late afternoon and lose all their petals by the following morning. I quickly clipped a few of them and rushed into the studio to play, approaching them as I would a portrait of a person. As the weeks carried on, more subjects began presenting themselves as they came out of their winter dormancy, and the series was born.

Each image is created in-camera using the power of studio lights covered in gel paper to get the rich and saturated colors you see.

PM: What is your attraction for ultra-bright colors?

LR: I’ve always loved using color in photography as a way to tell a story and direct the eye throughout the image. Using ultra-bright colors to photograph these plants was a way to transplant the viewer into a vivid and magical otherworld.

PM: Which cameras, lenses, and lights did you use?

LR: I shoot with a Nikon D810, 24-70mm, and use AlienBees strobes with colored gel paper on them to create these images.

Photojournalist Ron Haviv on the Changing Landscape of Conflict Photography — 1854

Embed from Getty Images
PANAMA CITY, PANAMA – MAY 10: Vice presidential candidate for the Democratic Alliance Coalition Guillermo Ford is hit by a member of the Dignity Brigade that attacked marchers on 10 May 1989 in Panama City. (Photo credit RON HAVIV/AFP via Getty Images)

Ron Haviv’s above photo went viral before anybody even knew what it meant to go viral. At age 23, he had just traveled to Panama on a whim in 1989 to photograph the election.

General Manuel Noriega annulled the election before counting finished after it had been shown the Noriega-backed candidate was going to lose by a 3 to 1 margin. The winners started street protests, and in the above photo, we see Guillermo Ford, who would eventually be vice president, being beaten by a paramilitary soldier.

Haviv is an Emmy nominated, award-winning photojournalist and co-founder of the VII Photo Agency, who has covered more than 25 conflicts and worked in over 100 countries.

“NonFungible.com, until recently, showed an ‘average sale’ price, and it was shockingly high!” says Kimberly Parker in the above article. “Several thousand dollars! But then I wondered, with my tiny artist brain that is bad at math: what exactly is an average?

“It turns out: you get an average by adding up all the numbers in a list and then dividing that by the number of uhh numbers. But an average can be skewed significantly by sales that are extremely low or extremely high, so it’s considered an unreliable metric.

“That’s why there’s another useful calculation that often gets done: the median. To get a median, you have to list all the numbers in your list in order (highest to lowest, or lowest to highest), then you find the exact middle point of that list. This gives you a much better idea of what it’s like to be ‘in the middle of the pack’.”

I remember this day (still in high school). Don’t know if you’ve seen the WaPo piece by Patricia McCormick @McCormickWrites about Mary Ann Vecchio, the girl in the photo. This brought back a lot of sad memories from long ago.https://t.co/IQtVIaENBb

The photo of Mary Ann Vecchio kneeling over the body of Kent State University student Jeffrey Miller is one of the most important images of the 20th century. Taken by student photographer John Filo, it captures Mary Ann’s raw grief and disbelief at realizing that the nation’s soldiers had just fired at its own children.

Last month in memory of Prince Philip, Buckingham Palace released a heartwarming image (above) of the Queen and her husband with seven of their great-grandchildren at Balmoral Castle. The Duchess of Cambridge, Kate Middleton, married to Prince William, took the beautiful family shot, which showed the royals enjoying a summer break in Scotland.

Embed from Getty Images
Britain’s Catherine, Duchess of Cambridge, holds a camera as she takes part in a photography workshop with the charity’ Action for Children’ in Kingston, southwest London, on June 25, 2019. (CHRIS JACKSON/POOL/ AFP via Getty Images)

Cities can be chaotic and loud but, maybe after the quiet and solitude of the lockdown, what all of us, especially photographers, are yearning for.

Christopher Lin, one of the two founders of SLR Lounge, along with Pye Jirsa, feels that photography blogging might be overrated and what you could do instead.

The biggest issue many photographers face when photography blogging is the SEO concept of Keyword Cannibalization, where multiple pages rank for the same keyword phrases.

Check out more challenges and the alternatives at the link above and let us know your solutions in the comments below.

Since the early 1980s, Shabazz has captured the energy of street life and hip-hop culture in New York, making memorable images of joy, style, and community.

20,000 people were killed when a tsunami struck the coast of Japan on March 11, 2011. It caused explosions at the Fukushima Daiichi nuclear plant and devastated the region.

Photographer Munemasa Takahashi realized that family photos and memories must have been lost in this tragedy. His Lost & Found Project grew out of Memory Salvage to gather and preserve family photos scattered in the debris and ultimately return them to their owners.

“When I saw lots of people who looked for their own photos from the piles of found photos, I understood that we need memories to live,” Takahashi told NPR.

Memory Salvage has digitized more than 750,000 images, and more than 460,000 have been returned to their owners. Many photos were damaged beyond repair, and those became part of the Lost & Found project.

Why is This the ‘Most Instagrammable’ Bird? – BBC

The bird is the frogmouth, which actually was once designated the world’s most unfortunate-looking bird. What has changed? Find out at the link above.

Take A Look Inside A Charming Dystopian Funhouse — Alpha Universe

Photos Showing a Different Side to Skinhead Culture Today — Huck

If your shutterbug sensibilities are nagging you to get out of your cooped-up existence, here are some travel accounts to look at to take virtual or real luxury getaways and adventures.

Filming for Abbas by Abbas (2020) by director Kamy Pakdel, art director for some of Abbas’ books, was completed in 10 days, just six days before his death. In the film, Abbas Attar – better known by his mononym Abbas is asked where he was standing to get a particular shot, and he replies, “Let the photos live their lives and keep their mystery.”

From the PetaPixel obituary to Abbas:

Throughout his career, Abbas focused on telling in-depth stories with his photos rather than capturing single “decisive moments.” According to Magnum, Abbas believed these to be two distinct approaches to photography.

“[O]ne is writing with light, and the other is drawing with light,” the photographer once said. “The school of Henri Cartier-Bresson, they draw with light, they sketch with light. The single picture is paramount for them.

“For me, that was never the point. My pictures are always part of a series, an essay. Each picture should be good enough to stand on its own, but its value is a part of something larger.”

I photographed Dolly Parton in 1972 when she was a member of the Porter Wogonner Band, a popular country music act. I got to spend one hour with her backstage, along with the founders of Rounder Records. Amazing.

She gave me the best artistic advice ever. I asked why she presented herself the way she did on stage, and she said, “Folks don’t come out to see me looking like them.” Good thought for artists of all types.

I like the image because I love Dolly. And it’s been a popular image for me.

It was shot with a rare Rolleiflex 4.0 FW TLR Camera (wide angle) with a fixed wide-angle lens. Bare bulb flash. Simple. Very straightforward shot. What you see is what you get. As with all my work.

Henry Horenstein has been a professional photographer, filmmaker, teacher, and author since the 1970s. He earned his BFA and MFA at Rhode Island School of Design (RISD), where he studied with Harry Callahan and Aaron Siskind. He has published over 30 books, including Black & White Photography, Digital Photography, and Beyond Basic Photography, used by hundreds of thousands of college, university, high-school, and art school students as their introduction to photography.

Quote of the Week (or a previous week): Scott Bourne

Where light and shadow fall on your subject – that is the essence of expression and art through photography. — Scott Bourne, Olympus Visionary – Birder/Photographer