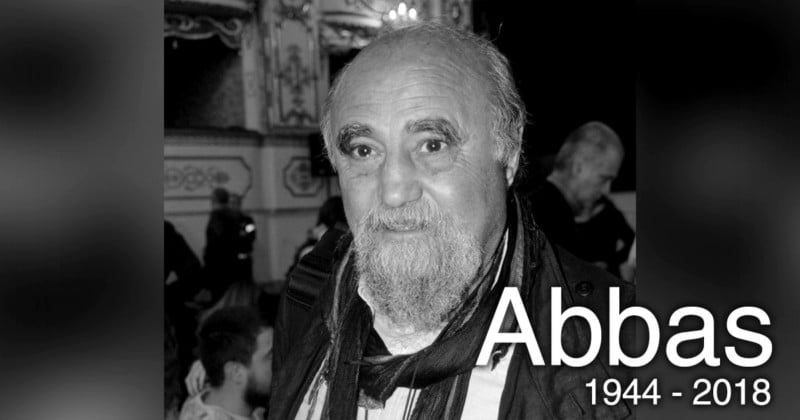 Abbas, the Iranian photojournalist and Magnum photographer, died in Paris today at the age of 74.

His passing was announced by Magnum, which published an obituary and a set of the late photographer’s photos.

It is with great sadness that we announce the death of Magnum photographer Abbas, who passed away earlier today aged 74. https://t.co/kgRVfMBHCi

Abbas (full name Abbas Attar) had a photography career that spanned six decades and is known for his intense photos of wars and revolutions in countries around the world (Biafra, Bangladesh, Northern Ireland, Vietnam, the Middle East, Chile, Cuba, and South Africa). In his later years, Abbas turned his camera toward the subject of religion.

The photographer joined the prestigious Magnum Photos cooperative in 1981 after being a member of the French agencies Sipa Press (1971 to 1973) and Gamma (1974 to 1980). After documenting the Iranian revolution between 1978 and 1980, Abbas spent 17 years traveling and photographing around the world in voluntary exile from his homeland.

As a result of the revolution, though, much of his subsequent work focused on the global rise of Islamism as well as other religions, including Buddhism, Hinduism, and Judaism.

“He was a pillar of Magnum, a godfather for a generation of younger photojournalists,” says Magnum president Thomas Dworzak. “An Iranian transplanted to Paris, he was a citizen of the world he relentlessly documented; its wars, its disasters, its revolutions and upheavals, and its beliefs – all his life.

“It is with immense sadness that we lose him. May the gods and angels of all the world’s major religions he photographed so passionately be there for him.”

The British Journal of Photography shared this interview with Abbas after speaking with the photographer at the Visa pour l’Image photojournalism festival in 2009:

Throughout his career, Abbas focused on telling in-depth stories with his photos rather than capturing single “decisive moments.” According to Magnum, Abbas believed these to be two distinct approaches to photography.

“[O]ne is writing with light, and the other is drawing with light,” the photographer once said. “The school of Henri Cartier-Bresson, they draw with light, they sketch with light. The single picture is paramount for them.

“For me, that was never the point. My pictures are always part of a series, an essay. Each picture should be good enough to stand on its own but its value is a part of something larger.”

Image credits: Header illustration based on photo by Maurizio Costanzo and licensed under CC BY 2.0

Cinematic Street Photos of Japan by Day and by Night