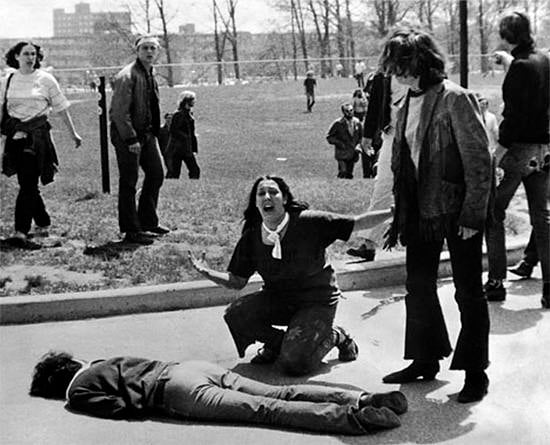 What you might not know, however, is that the widely published photograph at the time was actually manipulated. Here’s what the original photograph by Filo looked like: 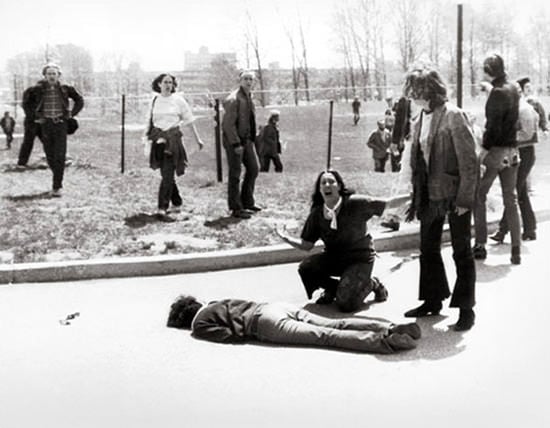 Notice how in the original photograph there’s a fence pole rising straight up from Vecchio’s head. Somehow, major magazines (e.g. Time, People, and LIFE) around the country get their hands on the secretly-manipulated version of the photograph, publishing it as the original.

When people began noticing the discrepancy, there was major controversy on online bulletin boards regarding the ‘shopping. 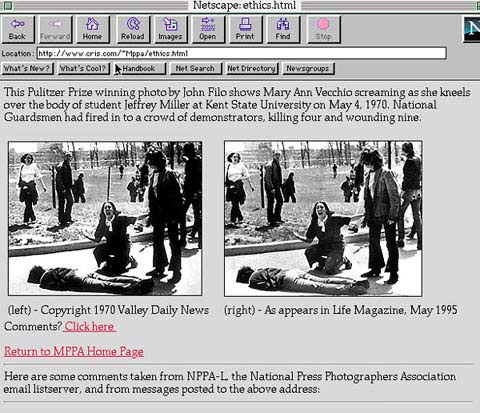 Here’s how David Friend, Director of Photography at Life Magazine, responded at the time:

There has been some heated back-and-forth discussion on the net concerning an allegedly manipulated image in the May 1995 issue of LIFE magazine (John Filo’s Kent State Pullitzer-winning picture). The original photo shows a fence post appearing behind the head of protestor Mary Ann Vecchio; the photo in the May issue of LIFE does not. As LIFE’s director of photography, I wanted to respond directly, clearly and put the matter to rest. LIFE did not and does not manipulate news photos. The photo we published was supplied to us by our photo library, the Time-Life Picture Collection, the second largest such repository of catalogued images. Amazingly, the fence post had been airbrushed out by someone, now anonymous, in a darkroom sometime in the early 1970s. The picture had run numerous times, without the fencepost, and without anyone taking notice: in TIME (Nov. 6, 1972, p. 23) PEOPLE (May 2, 1977, p. 37), TIME (Jan. 7, 1980, p. 45), PEOPLE (April 30, 1990, p. 117), to name just a few publications.

On deadline, while closing our May issue, the LIFE photo department contacted photographer John Filo, hoping to secure a repro quality print, as is customary at LIFE. Since we could not obtain a print from him directly in time to make our run, we went with the photo we had, not realizing a pole had been removed. One can only wonder why the missing pole hasn’t been noticed the previous times it has appeared, even though literally millions of people have seen the fence-post-less photo in publications dating back 23 years. At no time would LIFE’s photo, art or production department intentionally alter a news photograph.

Now you know: if you ever see a version of the photo that doesn’t have an unsightly fence pole, it’s ‘shopped.

P.S. The Wikipedia article on John Filo has interesting behind-the-scenes details of how the image was made. Filo was equipped with a Nikkormat loaded with Tri X film, was exposing at 1/500s at f5.6/f8, and had initially dropped his camera and begun to flee before gathering himself and documenting the scene.

Thanks for sending in the tip, Ofer!

New Leaked Photos of the Fujifilm X-E1 Shows the Flash, Top, and Back