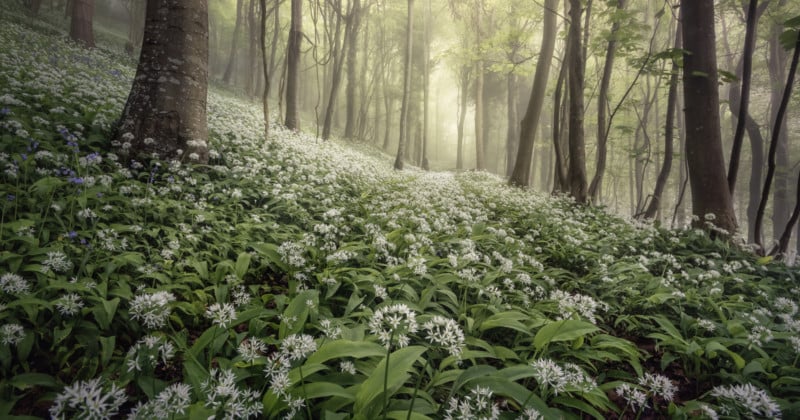 In October 2020, the family trip to the local zoo was interrupted by an unexpected telephone call – I had won the 2020 Landscape Photographer of the Year competition, a feat I had never imagined in my wildest dreams. This is the story of that image.

The Covid pandemic and the often-draconian restrictions it necessitated made 2020 a difficult and challenging year but the dulcet tones of Charlie Waite’s unmistakable voice announcing my winning of the 2020 Landscape Photographer of the Year competition delivered a huge ray of sunshine. Left in a state of semi-shock by Charlie’s call, the following week saw me repeatedly checking the confirmation email convincing myself it hadn’t been a dream. This was the third Dorset image to win in 13 years of the LPOTY competitions, which in itself speaks volumes about the beauty of this little county; devoid of mountains and waterfalls but delivers handsomely on rugged coastlines and mysterious woodlands.

As is customary, I welcomed 2020 with a litany of life-improving resolutions and promptly forgot or failed miserably on most. However, one resolution delivered on was to start entering photography competitions, with a further five-year goal of having an image selected for either LPOTY or IGPOTY books. I very nearly failed here too. Having decided 2020 wasn’t going to be my year, preferring the 2021 competition and the chance to build a stronger body of entry images, my wife, fortunately, thought this was a terrible idea and persuaded me otherwise – an intervention I’ll be eternally grateful for, as the accolade completely blew me away!

It is not surprising that the winning image was a springtime effort, my favourite season with the abundance of woodland flora and annual awakening from photographic hibernation. It was taken in a little woodland stumbled upon while foraging in Dorset’s backwaters in May 2018 for a springtime scene a little different from the norm. I’d not had much luck before uncovering this little pathway cutting through a sea of blossoming wild garlic – a scene smelt well before it was seen. Having found a woodland carpeted with a mix of bluebells and wild garlic the year previously, I’d been inspired to uncover something similar, but not in my wildest dreams had I expected to find a scene so unique. 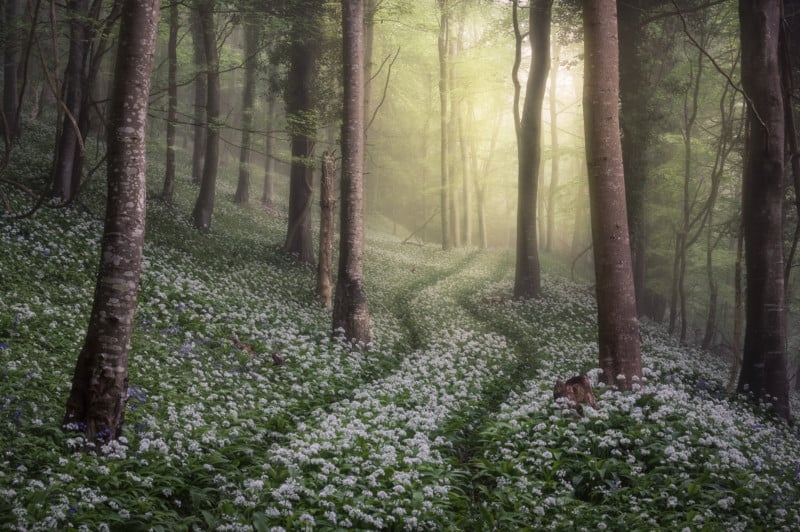 The surrounding area was peppered with garlic patches but nothing startlingly image worthy, so as I neared this wooded hillside, my anticipation rose in tandem with the increasingly rich and pungent aroma that permeated the air, a real treat for the senses. Although the conditions were harsh, with large spots of sunlight burning through the canopy, I knew I’d uncovered a gem and explored compositions for what I knew would be repeat visits in the coming days. The following morning, heavy fog brought excitement and frustration in equal measure as I crawled the twenty miles through mist-shrouded country lanes only for it to evaporate as I reached my destination. On the third morning, I hit the jackpot. Looking down on the valley that cradled this magical garlic grove was like looking into a bowl of soup with the fog blanketing all but the upper edges. Scared of a repeat of the previous morning’s vanishing mists, I charged into the valley to find the scene before me, soft mists and beautifully diffused light spilling through the canopy. 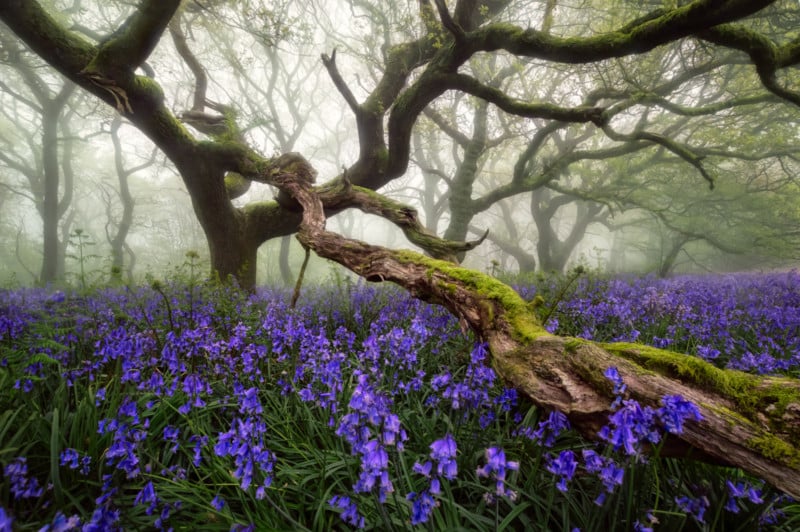 Two mornings of harsh unappealing light had allowed me time to become familiar with the grove and possible compositions so I was ready to start applying my ideas to the stunning conditions. The perfectly formed pathway snaking its way into the misty distance was too appealing not to incorporate as a key element. The path and trees tunnelled your view through the image; although somewhat obvious, the pathway added structure, while simplifying and making sense of the chaotic mess that nature presents in wooded areas. After capturing numerous pathway-dominated compositions and at a point where I’d usually trot off home happy with my morning’s endeavours, I decided to step away from the obvious. For the first time, I shot the flowers low down and close up, giving them greater prominence in the image which I loved with the sea of garlic disappearing in the distance. Although concerned that I lost the visual guidance of the path, having tree trunks on either side and the warm light of the background gateway delivered enough of a funnelling effect to encourage the eyes to wander through the image. Dropping low meant an emphasis on the rising elevation, another element I loved about the scene.

Battling to avoid disturbing the garlic, I finally found these two dominant flowers towering above the sea of white and felt they anchored the foreground, a visual starting point that added depth before the eye started to wander through the scene. Additionally, and not by design, or at least not mine, the soft mistiness of the distant opening added to the mystery of this enchanting scene. Finally, and importantly for me, was negating evidence of the outside world. This secretiveness and containment, and the feeling of isolation it promoted, is an element I continually strive for in my woodland imagery … with varying degrees of success. The scene was so mysterious, a sea of garlic so unfamiliar to most, that I wanted to ensure it wasn’t blemished by distractions. I worked to create an image that the viewer could lose themselves in. 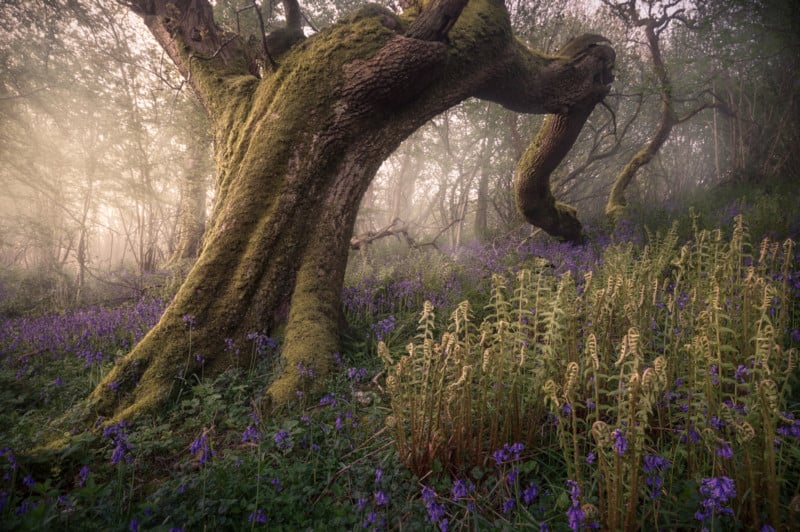 Shooting that morning, I had a clear visualisation of the final image, a soft and airy feel with a sense of the mystical, a place that few are privileged to experience. Not that my vision necessitated a particularly vivid imagination – Mother Nature had delivered a scene of unrivalled beauty. Although I had a preconceived notion of the completed image, nearly two years passed before feeling the desire to process it – a welcome breathing space that meant I was far more capable of realising my original intentions.

Post-processing is always subjective, but I think woodland imagery is at its most pleasing when processed in a softer, more sympathetic way. Working to emphasise the mist and diffused light were vital, as was steering clear of the saturation slider. To keep the central flowers and pathway as star attractions, I worked to harmonise the predominantly yellow and green hues while keeping the colour palette muted and soft. Colour was, in fact, my primary focus. Achieving the correct colour balance and homogeneity across the image allowed me to increase the drama while retaining the subtlety of a misty woodland that constantly draws me.

For those technically inclined, my old trusty, and very rusty, Nikon D3200 allied with a Sigma 10-20mm wide angle lens (shooting at 11mm) were the weapons of choice. Due to the close proximity of the central two garlic flowers, I shot at ƒ/11.0 with the intention of focus stacking multiple images but to my surprise and relief found that one image sufficed. The inherent softness as the image drifts to the background only added to the morning’s atmosphere. Neutralising foliage reflections with a polarising filter was achieved solely through the mercy of a windless morning that allowed an acceptable shutter speed of 1/2s at ISO400; just short enough to ensure the central flowers remained tack sharp.

If the truth be told, I was extremely lucky. I recall reading a statement another LPOTY winner had quoted from the acclaimed war photographer Robert Capa, which I feel is particularly relevant to this shot:

All pictures are already there, the photographer just has to find them.

This was definitely the case here, where a scene of raw beauty and Mother Nature at her finest combined in spectacular unison. It was a scene I was extremely fortunate to witness and one I will remember for a lifetime.

The article is courtesy of ELEMENTS Magazine.  ELEMENTS is the new monthly magazine dedicated to the finest landscape photography, insightful editorials and fluid, clean design. Inside you will find exclusive and in-depth articles and imagery by the best landscape photographers in the world such as Bruce Barnbaum, Erin Babnik, Christian Fletcher, Christopher Burkett, Hans Strand, Rachael Talibart and Freeman Patterson, to name a few. Use the PETAPIXEL10 code for a 10% discount off the annual subscription.

About the author: As a relative newcomer to the world of photography, Chris’ initial passion for capturing wild and rugged seascapes has recently been surpassed by the quiet calling of Dorset’s hidden woodlands.  Specialising in intimate treescape scenes of mother nature at her finest, combining floral displays, spectacular conditions and grand woodlands, Chris’ unique imagery was recognised in 2020, winning the UK Landscape Photographer of the Year award and a runner-up placing in the Wildflowers category of the International Garden Photographer of the Year.