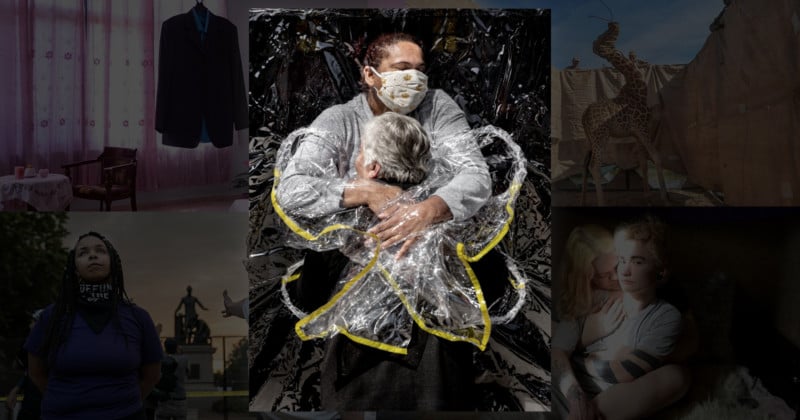 World Press Photo of the Year

The World Press Photo of the Year is designed to honor a photographer whose visual creativity and skills combined to create a picture that captures or represents an event or issue of great journalistic importance in a given year. This year, there is likely no larger story than the COVID-19 pandemic, and a photo by Mads Nissen — a photographer from Denmark — titled The First Embrace took top honors. His photo was also the winner of the “General News” category.

Below is Nissen’s description of the photo:

“This was the first hug Rosa had received in five months. In March, care homes across the country had closed their doors to all visitors as a result of the COVID-19 pandemic, preventing millions of Brazilians from visiting their elderly relatives. Carers were ordered to keep physical contact with the vulnerable to an absolute minimum. At Viva Bem, a simple invention, ‘The Hug Curtain’, allowed people to hug each other once again. The new coronavirus had first appeared in Wuhan, China, at the end of 2019, and by January 2020 had begun to spread around the world. On 11 March, the World Health Organisation declared the COVID-19 outbreak a pandemic. The disease—transmitted mainly via close contact, respiratory droplets, and aerosols—could be fatal, and people over the age of 70 were one of the groups considered most vulnerable to the disease. Brazilian president, Jair Bolsonaro, dismissed claims about the severity of the pandemic and the danger posed by the virus, undermined quarantine measures adopted at state level, and encouraged Brazilians to continue working to keep the economy afloat. Brazil ended 2020 with one of the worst records globally in dealing with the virus, with some 7.7 million reported cases and 195,000 deaths.”

Six other photos were nominated for the top honors, which were revealed earlier this year and can be seen here.

The Foundation adds that The World Press Photo Story of the Year is designed to honor the photographer whose visual creativity and skills produced a story with excellent editing and sequencing that captures or represents an event or issue of great journalistic importance that year. This year, that honor went to photographer Antonion Faccilongo from Italy for his story titled “Habibi.”

“Nearly 4,200 Palestinian security detainees are being held in Israeli prisons, according to a February 2021 report by human rights organization B’Tselem. Some face sentences of 20 years or more. To visit a Palestinian prisoner in an Israeli jail, visitors have to overcome a number of different limitations resulting from border laws, prison regulations, and restrictions set by the Israel Security Agency (ISA). Visitors are usually allowed to see prisoners only through a transparent partition, and talk to them via a telephone receiver. Conjugal visits are denied and physical contact is forbidden, except for children under the age of ten, who are allowed ten minutes at the end of each visit to embrace their fathers. Since the early 2000s, long-term Palestinian detainees hoping to raise families have been smuggling semen out of prison, hidden in gifts to their children. Semen is secreted in a variety of ways, such as in pen tubes, plastic candy wrappers, and inside bars of chocolate. In February 2021, Middle East Monitor reported that the 96th Palestinian baby had been born using sperm smuggled from Israeli prison.

“Habibi, which means ‘my love’ in Arabic, chronicles love stories set against the backdrop of one of the longest and most complicated conflicts in modern history. The photographer aims to show the impact of the conflict on Palestinian families, and the difficulties they face in preserving their reproductive rights and human dignity. The photographer chooses not to focus on war, military action, and weapons, but on people’s refusal to surrender to imprisonment, and on their courage and perseverance to survive in a conflict zone.”

Below are the photos that make up Faccilongo’s winning series. The first photo below also won the top honors in the World Press Photo’s Long Term Projects category.

Below are the remaining categories and the winning images for each:

The full set of images including second and third prize winners in each category can be seen on the World Press Photo website.