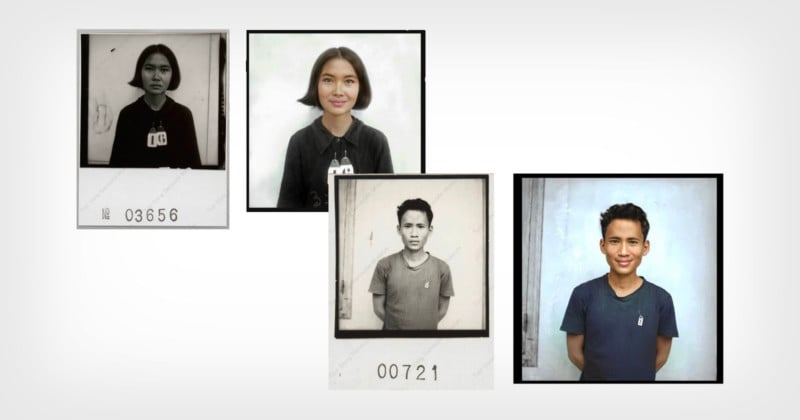 Vice and a photo colorization artist are in hot water this week after it was discovered that he had ‘Photoshopped’ smiles to the faces of Cambodian genocide victims in his colorized photos.

On Friday, April 9th, Vice Asia published an interview with colorization artist Matt Loughrey who has been restoring and colorizing images of Cambodian genocide victims from the infamous S-21 Tuol Sleng Prison. But it turns out Loughrey manipulated the images beyond just colorization by adding smiles to the faces, causing an uproar.

Tuol Sleng was a well-known torture and execution center used during the Khmer Rouge regime, and today it is a memorial museum whose archives can be found online. The Khmer Rouge was led by revolutionary Pol Pot, who classified and oppressed people based on their religious and ethnic backgrounds.

When it was discovered that Loughrey’s images had adjustments made to facial expressions, the photo series was immediately condemned by social media and the Cambodian government even spoke up to voice its opposition to the project.

“We urge researchers, artists, and the public not to manipulate any historical source to respect the victims,” Cambodia’s Ministry of Culture said in a statement calling on Vice to remove the images. 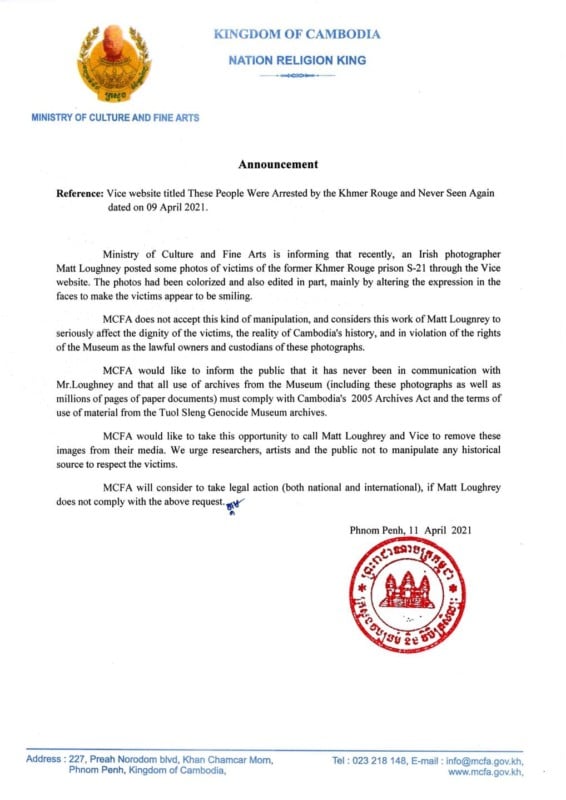 PetaPixel reached out to Loughrey for comment but he did not respond ahead of publication.

Matt Loughrey in Vice is not colourising S21 photographs. He is falsifying history: pic.twitter.com/z6J99J7BOE

The Vice article about the guy colorizing Khmer Rouge prisoners and making them look like they’re happy and having a good time is so funny pic.twitter.com/7YoTx1ojz0

Vice’s original story explains that Loughrey’s original reason for restoring the images was at the request of a person in Cambodia. He says that he knew about the Kmer Rouge regime and Pol Pot, but had never been asked to do a project like this before. The original request was for three images, after which he decided that he needed to restore as many images as possible. In his words, “this had to be done.”

This photo of my uncle, Khva Leang, was part of the project at the center of a recent @vice article. Unlike some of the other photos, I don’t believe this smirk was photoshopped. I have seen the original. But the article tells a false story about my uncle. https://t.co/WUzZjITK8z pic.twitter.com/ek0bHuTvOU

We don’t know the exact way in which he died, and there may be a record of that we haven’t seen. But the rest is false: he was not a farmer, but a primary school teacher. It’s impossible for Loughrey to have been in contact with his son, because his only children also died.

The images that Loughrey restored were documentation photos and Loughrey notes that while he was working on the images, he understood the nature in which they were captured.

“It’s despicable,” he said to Vice. “Anything and everything is torture.”

In the interview, Vice asked Loughrey specifically about people smiling, seemingly unaware that the original portraits found in archives do not contain happy expressions.

“What about the images of people smiling?” Vice asks. “What do you make of those?”

Loughrey’s response is turning heads, as in it he doesn’t explain that the smiles were not present in the original images.

“Out of 100 images I looked at, the data showed that the women tended to have a smile on their face more so than the men,” Loughrey responded. “I think a lot of that has to do with nervousness. Also—and I’m making an educated guess—whoever was taking the photographs and who was present in the room might have spoken differently to the women than they did the men.

“I thought about this time and time again when I was working on them. We smile when we’re nervous. We smile when we have something to hide. One of the classic things is to try to be friendly with your captor. So a smile would seem natural. I’m sure it’s very easy for the oppressor to smile, because they have all the power. And when you see a smile, you may try to mirror it in order to become synchronised with your captor. To make yourself feel like you have some control.”

As outrage and condemnation spread online, Vice apologized and removed the article and story on Sunday, April 11, citing that Loughrey manipulated the images beyond colorization and that it, therefore, did not meet its editorial standards.

On Friday April 9th, VICE Asia published an interview with Matt Loughrey, an artist working to restore and colorize images from Security Prison 21 in Phnom Penh, Cambodia, which was used by the Khmer Rouge regime from 1975 until its fall in 1979. The article included photographs of Khmer Rouge victims that Loughrey manipulated beyond colorization. The story did not meet the editorial standards of VICE and has been removed. We regret the error and will investigate how this failure of the editorial process occurred.

As noted by E. Quinn Lisbon on Twitter, this is not the first time that Loughrey has adjusted facial expressions in his work. The difference here, however, is the context and the responses to Vice‘s questions that made it seem as though the smiles were originally present.

Colorization of historical images has been a subject of debate among scholars and historians, as many do not believe it should be performed at all. While Loughrey is accused of “falsifying history” in this particular case because of how he adjusted skin tones and facial expressions, some historians believe that altering these images at all is disingenuous to historical context.

“It is a nonsense,” Luke McKernan, the lead curator of news and moving images at the British Library said in an interview with Wired. “Colourisation does not bring us closer to the past; it increases the gap between now and then. It does not enable immediacy; it creates difference.”