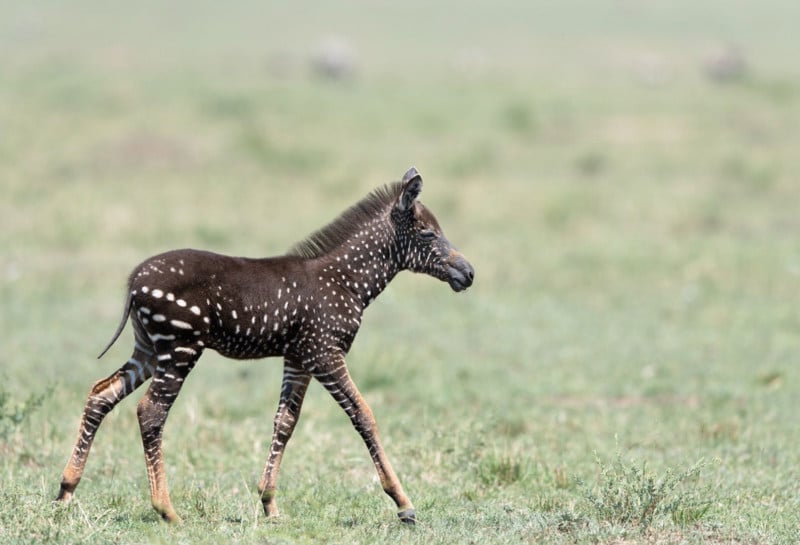 A wildlife photographer was shooting in Kenya when he captured photos of a rare zebra foal that had white spots on a dark coat rather than the typical black stripes on a white coat.

Hong Kong-based wildlife photographer Frank Liu was visiting the East African nation in September 2019 when the strange-looking baby was discovered. A Massai guide and photographer named Antony Tira had noticed it the previous day in the Maasai Mara National Reserve, and Liu had a chance to be one of the first to see and photograph the foal the following morning.

The guide named the foal Tira, after his surname.

“Few years ago there was a similar case, however that zebra still maintained the stripes and brush-like tail,” Liu writes. “Tira, however, has patterns that appear as polka dots!”

Tira is believed to be the first polka-dotted zebra ever discovered in Maasai Mara.

According to National Geographic, Tira has a rare genetic mutation called pseudomelanism that causes an abnormality in its stripe pattern. Another rare animal with an unusual color variation caused by pseudomelanism is the black tiger.

Unfortunately for Tira, these unusual color variations do not bode well for the animal’s life expectancy.

“Research on other species has shown that, while it is harder for a predator to target an individual in a group, it is easier if an individual is different,” UCLA biologist Ren Larison tells Nat Geo. “I have seen several photos of foals with this specific pattern over the years, but only one photo—from the ‘50s—in which the individual was either a juvenile or adult.”

It’s also hypothesized that zebra stripes help to deter biting flies such as horse flies that spread diseases — studies found the flies are less likely to land on black-and-white striped surfaces than uniformly colored ones. With its unusual coloration, Tira may be a more attractive target for flies than the rest of the herd.