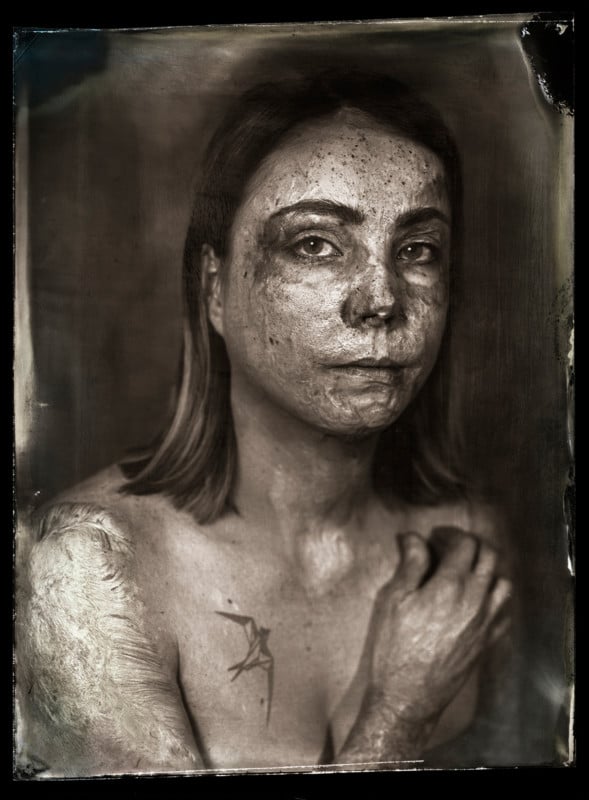 Clément Marion, a French photographer in his early twenties, shoots only with analog processes. In his latest project, he decided to use wet plate collodion to capture intimate portraits of burn victims.

“My first contact with this world was during childhood; there was one in my village,” says Marion. “Much later, I heard an interview which asked this question: ‘When was the last time you saw a major burnt person? Haven’t you seen any? These people are hiding.

“This sentence touched me, so I asked myself how to help this cause, [and bring] acceptance of others, … advocate tolerance.” 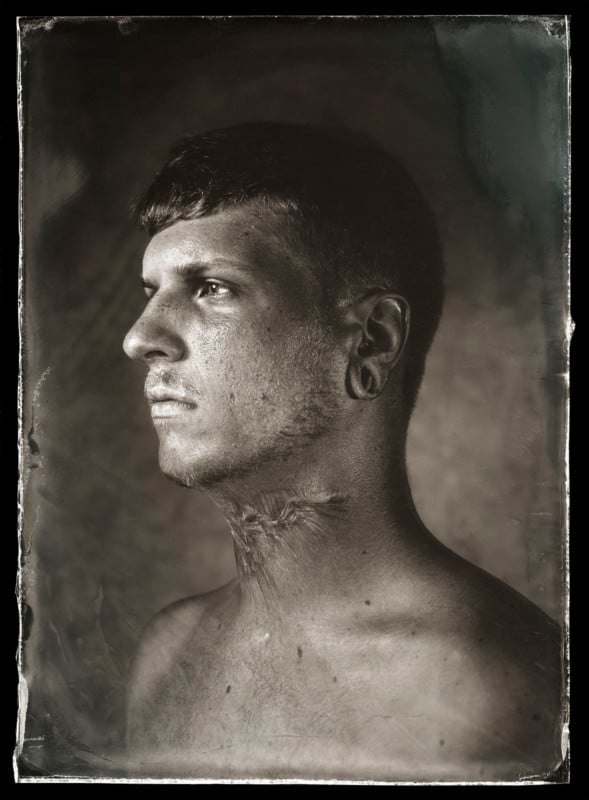 Marion had also wanted to try wet plate collodion photography for some time, so he decided to combine both his objectives in 2020.

Photography has always had an omnipresent place in Marion’s life for the past fifteen years. He started photography very early on when his father presented his sister with a compact camera, which he used for some time. That was his first contact with photography.  He then had his own camera, ultimately moving on to Minoltas, a Rolleicord, and even a miniature Minox.

The first film that Marion developed was in college when he was nineteen, and he was instantly in love with the medium. He enjoyed the fact that he could accomplish everything with his own hands, from the shoot to the darkroom processing. Digital photography, even today, does not interest him at all.

Last year, Marion, who has never taken photography courses, spent the first half of 2020 practicing his collodion skills by photographing his friends. Then he was ready for the project. He had heard about the process from Sally Mann, one of his favorite photographers. Collodion to him was the “highest photographic process, but also the most random and complicated.” 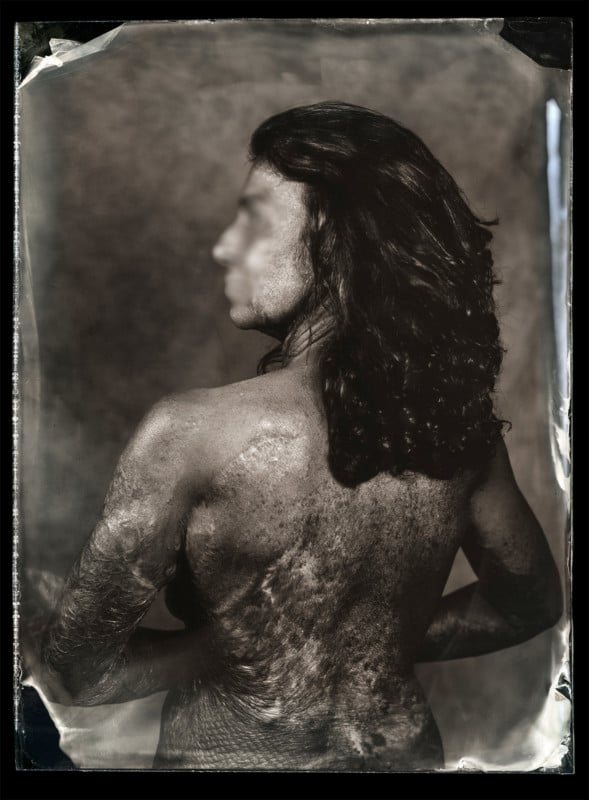 The Sinar F2 4×5 is his camera of choice, a 135mm lens and 8-10 Multiblitz X10 AC/DC flash heads to light the subject and the background in a rental studio. His plates’ sensitivity is approximately only 3-6 ISO, and therefore he needs that many flash heads to get a good exposure.

Flash gives him the convenience of not having to have the model stand still for long exposures. The 4×5 collodion plates are scanned on an Epson Perfection V850 Pro Flatbed Photo Scanner for online use and making prints.

The wet collodion process has a significant disadvantage: the entire process, from coating to developing, has to be done before the plate dries. This gives the photographer no more than about 10-15 minutes to complete everything. Marion has to use a rental studio with an attached darkroom for his project due to this difficulty.

His first model had to travel to Toulouse, France, where Marion had his set up then. He found her from her Instagram, which she had set up after her accident. In that first shoot, he had chemistry problems but managed one good plate from the session. 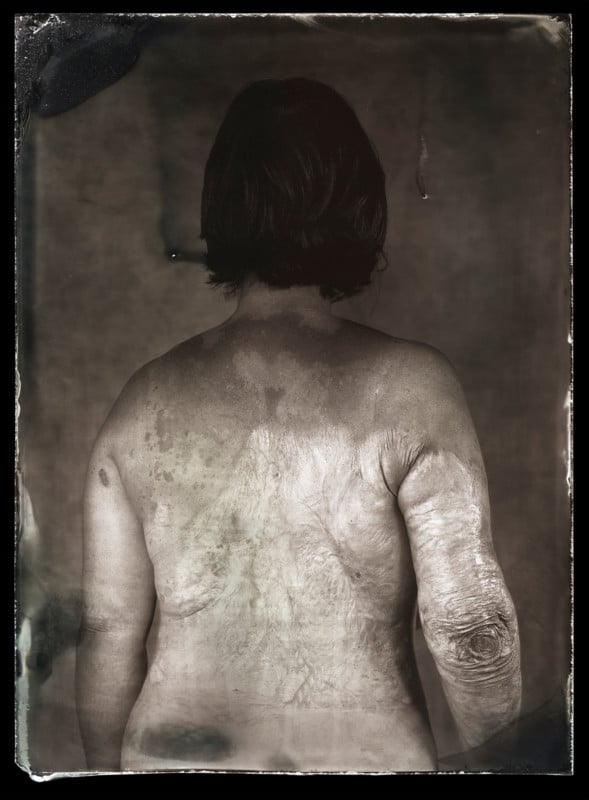 “I welcome people early in the morning; I present the laboratory and the protocol from start to finish,” says Marion of the morning introduction. “At first, I lacked training, it was 4 or 5 plates per afternoon, but towards the end, I reached 10.”

As he gained expertise, he had to worry less about lighting and chemistry. He had figured out the shape he wanted to give to the series, and things followed more smoothly.

In between the session, Marion serves a meal and discusses the project. They can view the photos already in the series and ask him questions.

“Often, that’s when we bring up each other’s stories. It’s a crucial step, especially to introduce the shot,” the photographer explains. “Some have had accidents. For others, it is about aggression [assault]. I usually guide the models, especially to make them feel comfortable at first. But of course, I am open to suggestions. It’s very important to stay that way in these cases; everyone has something to bring to a shoot. It’s a four-handed work.”

Marion has shot twelve subjects so far but always shoots only one angle/pose for each person even if he exposes multiple plates.

“The parallel between this [collodion] texture and that of the scarred skin of burn survivors is obvious, [and therefore] I decided to use wet collodion for this project,” explains the artist. “This film dries little by little from the preparation for the shooting, until at the end of the development of the photograph. Eventually, it hardens, retracts, sometimes cracks, and often changes color. These are also the main characteristics of burn scars.”

The negative emulsion is made up of two main elements, among others, collodion and silver nitrate. Separately, they are both used in medicine for wound healing. The collodion as a bandage, and the silver nitrate, in the form of a small stick, allow burning a poorly healed scar to direct the skin’s re-healing. Together, these two elements form a photographic emulsion similar to a thin skin spread on a glass plate. 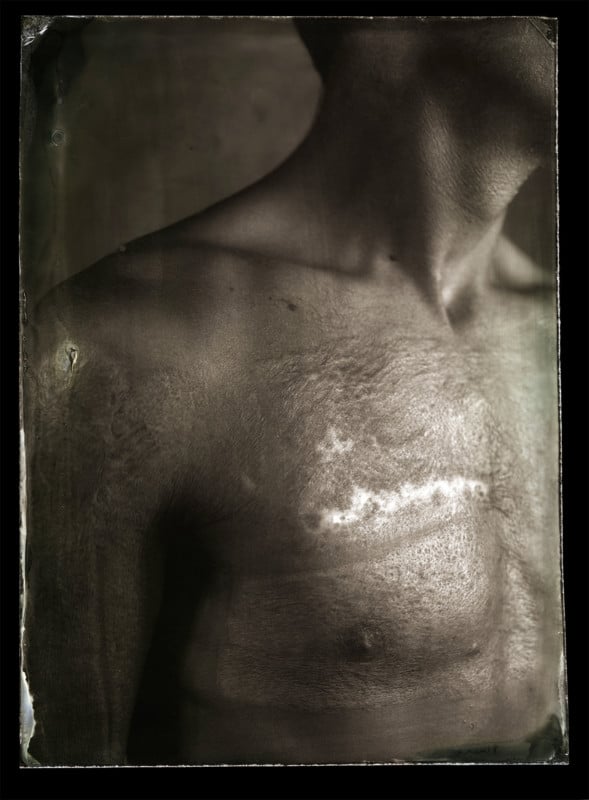 Marion also has a book (hopefully) to be published by crowdfunding (PetaPixel asks all crowdfunding backers to do their own due diligence as we do not endorse any project). It is a 6×8, 50-page book that will be sent free of charge to around fifty health professionals, who will use it as a support in their medical procedures with their severe burn patients. It will feature photos as well as “a small writing participation from each of the people photographed.”

When asked how long he’ll continue to work on this series of burn victims portraits, the French artist replied: “Forever, I don’t know, maybe when I’ll think that I have what I need.”

Image credits: All photos by Clément Marion and used with permission.