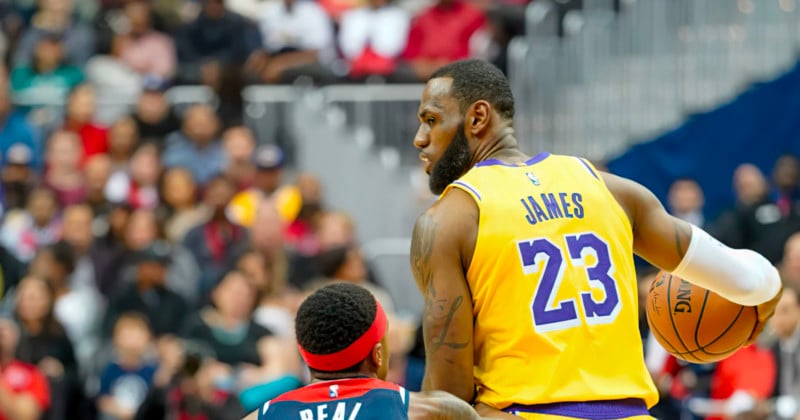 In December 2019, Los Angeles Lakers basketball superstar LeBron James posted a photo by courtside photographer Steve Mitchell to his Instagram and Facebook accounts without permission. That post has become the center of a raging copyright infringement legal battle.


A search on Getty Images for “LeBron James” shows 127,906 photos just on one agency at the time of this writing — in fact it has grown by 400 just in the last few hours. So, definitely, there are over millions of photos of the Lakers star on cellphones, pro cameras, and videos out there. But the question that is being raised is whether it is okay for even a superstar to take whichever image he pleases and use it anywhere.

The bone of contention is over a photo of LBJ dunking on Meyers Leonard in a Lakers vs. Heat game in Miami on December 13th last year. It was a side-on dunk, and James reportedly captioned the image “What. A.Time. To. Be. Alive and I’m LIVING with Pure Joy! Thank You,” followed by a basketball emoji. James posted it on his Instagram and Facebook pages, which have tens of millions of followers.

Did LeBron James commit copyright infringement by posting on his Facebook page a professional photographer's photo of him dunking? That question is at issue in a new federal lawsuit against James. Details in a @SInow and @TheCrossover legal story: https://t.co/SwwgRfHNGe pic.twitter.com/0STpTDLbKO

Steve Mitchell, who “has spent the last 27 years capturing the decisive moment on all levels of professional sports,” according to his website, is a seasoned photojournalist whose photographs have appeared in major publications, including Sports Illustrated and ESPN.

Mitchell is suing Lebron James and his companies Uninterrupted Digital Ventures and LRMR Ventures LLC, both of which, the complaint asserts, operate James’s Facebook page, over copyright infringement. Mr. Mitchell is bitter that he did not collect a dime from the photo he snapped of Mr. James, which attracted likes and shares on social media.

TMZ Sport reported in March that Mitchell filed a claim in court asking for any money made off the post or $150,000 for each time James used the image.

James and his lawyers have responded to Mitchell’s lawsuit by filing a countersuit against the photographer, the The Athletic reports. James is asking for at least $1 million and attorney fees.

James initially contested via court filings that he is entitled to post the photos as long as he isn’t commercially exploiting Mitchell’s work, but James later removed the photographs.

Sports Illustrated notes that no, that’s not how copyright works:

The fact that James is featured prominently in Mitchell’s photo did not give James the right to publish it elsewhere. Mitchell owns his photos. This goes to the essence of copyright law: absent a contractual relationship that instructs otherwise, Mitchell possesses copyrights in his creative works, including his photos. As a result, Mitchell has the right to control the reproduction of his photos, such as their publication on social media websites. He can decide whether to license his photos and, if so, demand financial compensation for granting a license, explains Michael McCann, Sports Illustrated’s Legal Analyst who is also an attorney and the Director of the Sports and Entertainment Law Institute at the University of New Hampshire Franklin Pierce School of Law.

King James’s counter lawsuit argues that Mitchell illegally used his photos on Mitchell’s website to promote his own photo service.

“Only after our client was sued for copyright infringement for alleged use of a single photo – which we have consistently tried to settle for a reasonable amount – did we file this countersuit upon learning the photographer was making unlawful use of photographs of our client on his website to advertise and promote his photography services business,” James’ counsel Howard Shire tells The Athletic in a statement. “We continue to try to resolve this matter amicably. We have no interest whatsoever in ultimately obtaining any amounts from the plaintiff.”

Houston Texans QB Deshaun Watson is currently involved in a similar legal dispute, and there have been numerous cases of celebrities using photos on their social media accounts without permission and subsequently being sued for it.

Sports photographers’ rights to using sports photos in publications are negotiated in collective bargaining agreements. However, another legal view is that James may have a point in claiming that the photographer is also profiting by promoting his photo service on his website by flashing James’ celebrity status connection.

Federal judge George Wu of the United States District Court for the Central District of California has called on both parties to settle the case between themselves after a hearing on Monday. A ruling is expected in about a week.