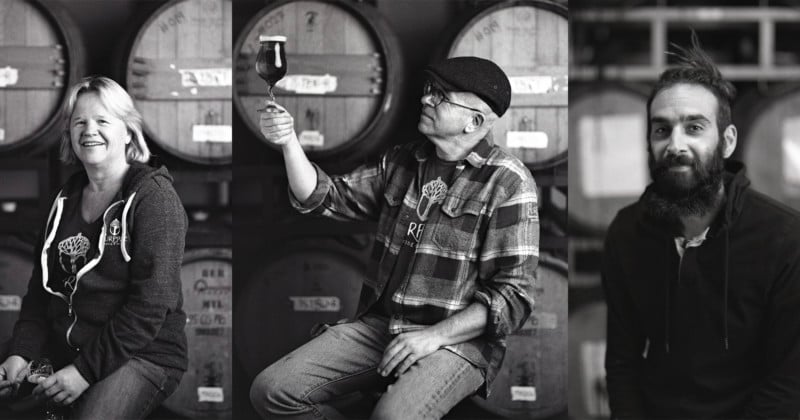 There are two things that I spend way too much money on: photographic film, and beer. By happenstance, those two passions combined with each other.

I shoot and develop at least a few rolls of film every week. Typically, this is accompanied by a good beer. For that reason, I try to keep my fridge stocked with beer and my cabinet stocked with developer.

But a few months ago I ran out of developer and I remembered reading that you can develop film in other liquids like wine and coffee. I searched Google for recipes and came across this great video “How to Develop Film With Beer.” It proved that not only can it be done, but it can produce a quality negative. I gave it a try and to my surprise, it worked.

Then I had an ah-ha moment.

I called a good friend, Jaclyn Menendez, a craft beer writer at PorchDrinking.com and suggested we do a portrait series on craft brewers and develop their portraits in the beer they’ve brewed. She was sold, but the pressure was on: could I replicate this with any consistency?

I started experimenting, tweaking development times, and testing film stock until I landed on a combination that produced consistent, and useable negatives. It took about two weeks and several wasted rolls of film, but eventually I found that sweet spot between film stock and development time. We pitched the idea to local brewers, and they were immediately interested. So a few photoshoots, and many good beers later, we kicked off the Faces in Beer project.

One of my favorite aspects of this project is that each beer adds slight variations to the negative. A stout produced a softer negative, where a sour produces a sharper negative, and that makes sense when you think about the chemistry. A sour has a much lower pH than a stout, and that acidity aids in the development process.

For these portraits, I decided to shoot with my Pentax 67 medium format camera and the beloved 105mm F2.4 lens. The Pentax 105mm F2.4 is one of the best analog portrait lenses you can buy for under $500. The bokeh falls off subjects with such accuracy that images look 3-dimensional. The colors and contrast are beautiful, and the build quality is bombproof. I shot with a single strobe, a Paul C. Buff Einstein, and a reflector made of poster board to add some fill light.

For film, I chose Ilford Delta 100 for its fine grain and consistent results. I experimented with other films, like Kodak TMAX 100, and Bergger Pancro 400, and while I love these film stocks, they didn’t respond as well to the developer.

If you’d like to try this yourself, I’ve provided the recipe here:

Safety:
Be sure to wear a mask, eye protection, and gloves.

*Washing soda is not the same as baking soda. Don’t have washing soda? You can make it by heating baking soda to 400°F for 30 mins.

I hope you enjoy these photos as much as I enjoyed making them. If you’d like to see any behind the scenes or follow my other work, you can catch me on Instagram.

About the author: Erik Stabile is an avid film and portrait photographer, writer, and marketer living in Fort Collins, Colorado. He enjoys documenting the people, places, and professions of the American West. Mr. Stabile believes that photography is a powerful tool that exposes faults and discovers beauty while uniting those who wish to improve the former and sustain the latter. You can find more of his work on his website.