Lee Morris of Fstoppers has uploaded a 6-minute video where he pits the iPhone 12 Pro against his Sony a7S III. You would think this comparison wildly unfair, and it is, but there are some surprising results from his findings.

First, one thing needs to be made clear: though the YouTube video title states that the test is a “4K HDR test,” it actually is not. While Morris does show what HDR footage looks like when imported to a non-HDR timeline in Adobe Premiere and he also shows what the footage looked like on his iPhone, the video shared here is not in HDR and was not edited in any HDR mode. So, in short, HDR is not tested.

Aside from that, Morris does show that in ideal conditions (bright a bright, sunny day), the iPhone 12 Pro does surprisingly well when viewed side-by-side with the a7S III footage at 100%. In order to see a real difference, Morris needed to zoom in considerably on the footage to 400%. Additionally, while the a7S III does look better when pixel-peeped thanks to its larger sensor and better optics, the bitrate of the footage also plays a significant role. The lower bitrate of the iPhone 12 Pro results in severe artifacts appearing in footage with motion. 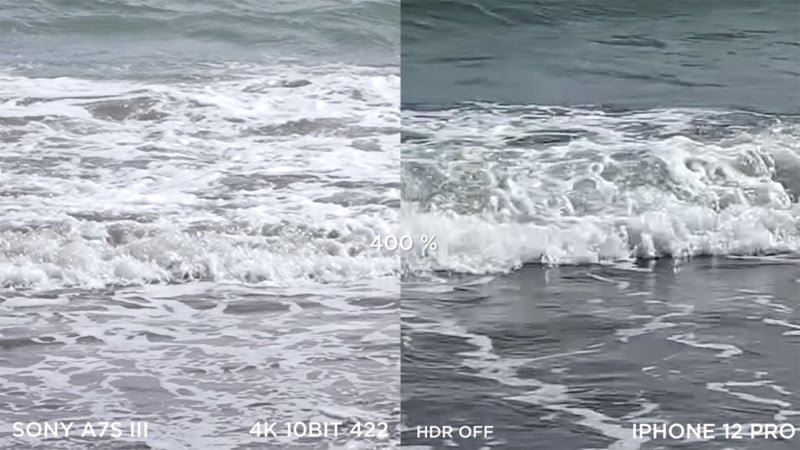 Though the iPhone 12 Pro did not stack up well against the a7S III when it came to autofocus, it did significantly outperform the Sony in footage stabilization.

Morris also noted that of the three cameras, the main camera is the best, the telephoto is also quite good, but the wide-angle lens was in his opinion “really blurry.”

All in all though, the iPhone held up well when it came to quality versus the dedicated video camera. So while it was likely an unfair comparison to make, the results weren’t nearly as far apart as some might expect. That said, Apple’s process for extracting files off the iPhone isn’t particularly easy. Morris spends nearly the last two minutes of the video showing how irritated he was with that particular process.

You can watch more from Lee Morris on the Fstoppers YouTube channel.