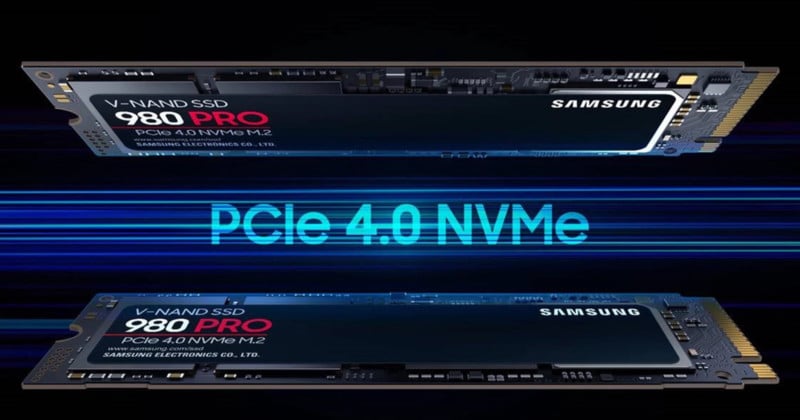 Samsung has just unveiled the latest and greatest in NVMe SSD technology with the release of the 980 PRO: the company’s first PCIe 4.0 solid state drive that’s “designed for professionals and consumers who want cutting-edge performance in their high-end PCs, workstations and game consoles.”

This SSD is aimed squarely at two groups: gamers and creative professionals. And while we don’t really care much about the former here at PetaPixel, the ultra-high speed and promised performance of the Samsung 980 PRO SSD lineup could certainly be a boon for the latter. 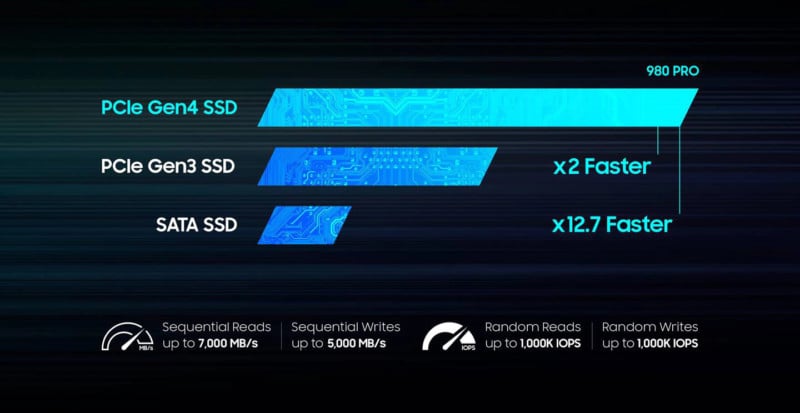 The drives are designed to take full advantage of PCIe 4.0, with sequential read and write speeds up to 7,000MB/s and 5,000MB/s, respectively, and random read and write of up to 1,000 IOPS (Input/Output Operations Per Second). According to Samsung, that makes these drives up to two times faster than PCIe 3.0 SSDs, and up to 12.7 times faster than SATA SSDs.

Of course, you’ll need a PCIe 4.0 equipped motherboard to take advantage of all this, but even on PCIe 3.0 the 1TB stick clocks in sequential read and write speeds of 3,500MB/s and 3,450MB/s, respectively. And the special nickel-coated controller and heat spreader label on the back of the SSD promise solid thermal performance no matter what motherboard you’re using. For Samsung, the goal with the 980 PRO was to create the ideal NVMe SSD for working with 4K or even 8K files; and as sensor resolution (and RAW files) get bigger and bigger, we expect these kinds of speeds to come in handy for professional photographers as well.

Profoto Unveils the A10 Speedlight: Works with Phones, Costs $1,100

The Market For Discontinued Photographic Film