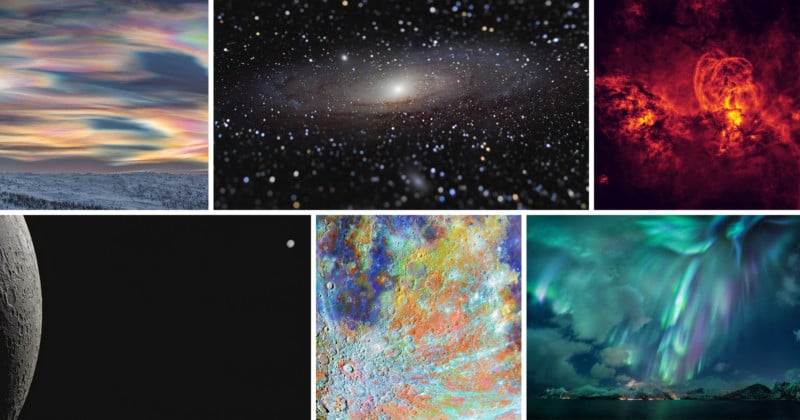 The Royal Observatory Greenwich has just unveiled the winners of the coveted 2020 Astronomy Photographer of the Year awards. And this year’s top prize went to a beautiful photograph of the Andromeda galaxy that makes it seem as if you could actually reach out and touch it.

Now in its twelfth year, the competition received over 5,000 entries from six continents for this year’s contest. Images were submitted for one of 9 categories—including Galaxies, Aurorae, Our Moon, People and Space, and Young Photographer of the Year, among others—and a total of 11 images were honored. There are 9 category winners, one overall winner selected from the categories, and two special prices for “best newcomer” and “imaging innovation.”

The winner of the Galaxies category, overall winner, and title of 2020 Astronomy Photographer of the Year went to France’s Nicolas Lefaudeux for his stunning photograph titled Andromeda Galaxy at Arm’s Length?:

Caption: Have you ever dreamt of touching a galaxy? This version of the Andromeda Galaxy seems to be at arm’s length among clouds of stars. Unfortunately, this is just an illusion, as the galaxy is still 2 million light years away. In order to obtain the tilt-shift effect, the photographer 3D-printed a part to hold the camera at an angle at the focus of the telescope. The blur created by the defocus at the edges of the sensor gives this illusion of closeness to Andromeda.

According to the Observatory, the judges were “captivated by Lefadeux’s awe-inspiring image.”

“To most of us, our closest neighbouring galaxy Andromeda can also feel so distanced and out of reach,” says contest judge Ed Robinson. “Yet to create a photograph that gives us the impression that it is just within our physical reach is truly magical, and somewhat appropriate as we adjust after such socially distanced times.”

Scroll down to see the winners from each of the categories and the two special prizes. If you’ve been waiting for an excuse to escape Earth, 2020 for a little bit this morning, now’s your chance.

Young Astronomy Photographer of the Year

Title: The Four Planets and the Moon

Caption: Photographing a planetary alignment requires rigor and patience but also a lot of luck. That evening, despite preparing everything for a week, the photographer encountered clouds. The magic started after sunset, where the moonset, Venus, Mercury, the star Antares, Jupiter and Saturn could be seen over the Indian Ocean. By looking at the sky map, The photographer could see that Pluto was there also above Saturn but invisible in my image. Note also the presence of Alpha Centuari on the left of the image as well as our immense galaxy, the Milky Way.

Caption: The photographer had heard a lot of stories about the ‘lady in green’. Although he has had the chance to photograph the Northern Lights many times, he had never seen the ‘green lady’ before. On a journey to Norway, she unexpectedly appeared with her magical green clothes making the whole sky burn with green, blue and pink colours.

Caption: The Tycho crater is one of the most famous craters on the Moon. This huge impact has left very impressive scars on the Moon’s surface. With the colours of the soils, Tycho is even more impressive. This picture combines one session with a black-and-white camera, to capture the details and sharpness, and one session with a colour camera, to capture the colours of the soils. These colours come mainly from metallic oxides in small balls of glass and can give useful information about the Moon’s geology and history. The blue shows a high titanium oxide concentration and the red shows high iron oxide concentration. This picture reveals the incredible beauty and complexity of our natural satellite.

Caption: Solar minimum may be seen as a quiet Sun and deemed dull in white light, but if you look closely at the small-scale structure, the surface is alive with motion. This surface is about 100 kilometres thick and the ever-boiling motion of these convection cells circulate, lasting for around 15 to 20 minutes. They are around 1,000 kilometres in size and create a beautiful ‘crazy paving’ structure for us to enjoy.

Title: The Prison of Technology

Caption: The star in the centre of the image is the Albireo double star, surrounded by the trails of moving satellites. How many more might there be by the time we reach next year’s competition? There could be thousands of moving dots in the sky. In order to create astrophotos, photographers have to carefully plan where to place the telescope, and this will be more difficult in the future with more satellites in the way.

Title: Space Between US…

Caption: This image shows the really close alignment of the Moon and Jupiter that happened on 31 October 2019. In the full resolution picture, you’ll see that there are three of Jupiter’s moons also visible. This small project is a big challenge that involves a lot of luck and good seeing conditions. To capture this phenomenon in such a big scale was quite demanding in data acquisition as Jupiter and the Moon travelled across the sky quite fast. It happened in altitude only 9 degrees above the horizon. I wanted to show the huge emptiness and the size of space, which is why there is a lot of ‘nothing’ between the two major parts of the image.

Caption: The photographer was searching for clear skies in Finnish Lapland to capture the beauty of a polar night and couldn’t believe his eyes when he saw what was waiting behind the clouds. Polar stratospheric clouds are something the photographer has been searching for many years and had seen only in photographs until that day. He took his camera onto a frozen river to get a good view and started to take photos. The clouds slowly changed their shape and colours. It was like watching someone painting, especially when the Sun was lower – it started to get a darker orange and the pink shades became stronger.

Caption: NGC 3576 is a well-known nebula in southern skies, but is shown here without any stars. Software reveals just the nebula, which has been mapped into a false colour palette. The scene takes on the look of a celestial fire-maelstrom. The image is intended to reflect media images taken in Australia during 2019 and 2020, where massive bushfires caused the destruction of native forests and have claimed over 12 million acres of land. It shows nature can act on vast scales and serves as a stark warning that our planet needs nurturing.

Caption: The image shows the central region of the California Nebula (NGC 1499). It tries to show the uncontrollable vast energy of nature, in a form which resembles the huge waves of a storm in the ocean. The RGB channels are used the create the colours of the stars, and all of the nebulosity are synthetized from the hydrogen-alpha and the SII channels. The colour assignment of the narrowband channels is done in a way to create an image close to true colour, but preserving the fine details and the depth provided by the narrowband filters.

Caption: Dark River is a sculptural work that maps, or mirrors, the Milky Way celestial entity using one of the largest images ever made of its central areas. Referencing Elizabeth Kesseler’s notion of the astronomical sublime, as well as Gaston Bachelard’s idea of ‘intimate immensity’, this gigapixel image of the Milky Way, showing around 84 million stars, is reworked into a sculptural ‘affective space’ that affords a bodily and imaginative engagement with the viewer. The image was obtained with the VISTA survey telescope at ESO’s Paranal Observatory in Chile and contains nearly nine billion pixels. This was an incredibly large file to work so the artist had to cut it down into manageable pieces to then print. She made 2.2 x 1 metre sections, which she then laboriously printed and glued together by hand to create a 9 x 5 metre sheet when flat.

The image was digitally printed at 300dpi using archival pigment inks, onto a Japanese paper which is lightweight yet robust. In creating this piece, the artist was emulating the mosaic process used by astronomers when processing and compositing data. The artist retained the naturalistic colours the astronomers used to colour the image, which makes the celestial more earthly and relatable. The full-sized print is sculpted to adapt to the space in which it’s displayed.

The winners, runners-up, highly commended and shortlisted images will also be showcased in the Insight Investment Astronomy Photographer of the Year exhibition at the National Maritime Museum, which opens to the public on October 23rd.

To learn more about the contest, see all of the winners, or find out more about this year’s exhibition, visit the Royal Observatory website here.

dubblefilm SHOW is Like a Reusable Disposable Camera of Old