Photographer, computational biologist, and science presenter Andrew Steele just released a fascinating short video about his favorite optical illusion. By manipulating a function of your visual system, he shows you how you can trick your brain into “adding” color to a black-and-white image.


This optical illusion is based on a visual process called chromatic adaptation, which is the brain’s ability to adjust to changes in lighting in order to keep the colors in the image constant. This is why a piece of white paper continues to “look” white to your brain whether you’re looking at it under very warm tungsten lights or very cold fluorescent lighting.

On a more photo-related note, it’s also why properly calibrating your monitor is critical when photo editing—your brain will quickly adapt to the image even if your monitor is too warm, or too cold, or if the colors are just “off,” and you won’t notice in the moment.

This process is so powerful that it can actually be used to trick your brain into adding color to a black-and-white image, which is the optical illusion that Steele demonstrates above. It works best if you’re viewing full screen, but you should be able to replicate it by scrolling through the images below. 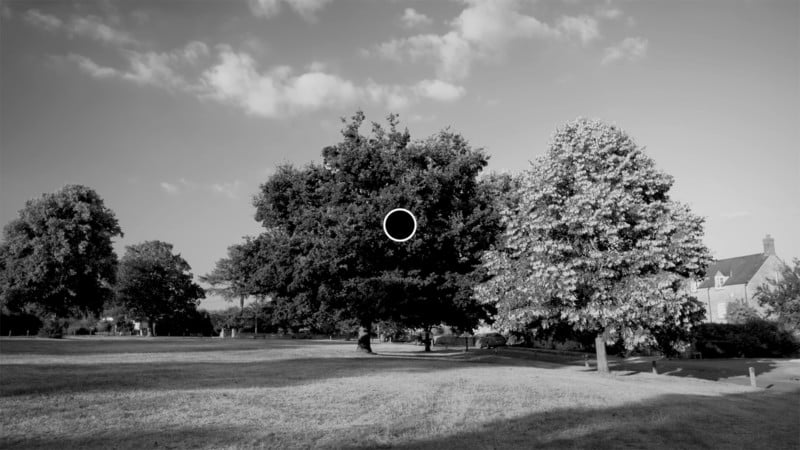 Next, here’s the same image with all of the colors shifted to their complimentary color and WAY over-saturated. Focus on that dot and hold your gaze there. Don’t look away. After a short time, the animated GIF will automatically shift to black and white, but as long as you don’t look away from the dot, you should see the image in color:

This will work far better if you’re watching the video at full screen, but if you managed it, you’ll notice that as long as you don’t scan the image, the black-and-white photograph looks as if it’s in color. It can even look quite vibrant, even though the image itself is 100% grayscale!

“The first time I saw this it absolutely blew my mind—it’s such a simple trick but so incredibly effective!” Steele tells PetaPixel. “I just had to make a video digging a bit deeper into how this works.”

If you want to dive deeper into why and how this works, or see this illusion at work using a couple of other images, check out the full video up top. And if you like Steele’s combination of education and entertainment, definitely give his YouTube channel a follow.