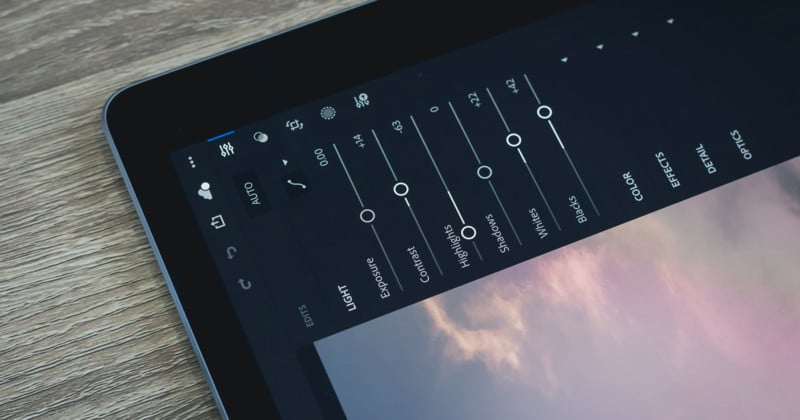 This morning, multiple readers wrote in to alert us to a major Adobe gaffe. It seems the latest update to the Lightroom app for iPhone and iPad inadvertently wiped users’ photos and presets that were not already synced to the cloud. Adobe has confirmed that there is no way to get them back.

The issue first cropped up on the Photoshop feedback forums two days ago, when the Lightroom app on iOS was updated to version 5.4. A user named Mohamad Alif Eqnur posted asking why all of his photos, presets, and watermark data had been removed after updating to the most recent version through the iOS app store.

This was followed by replies from other users saying that the same thing happened to them, whether or not they were subscription based or free. One user posted to Reddit’s r/Lightroom subreddit saying that they had lost “2+ years of edits” after the update.

“I’ve talked with customer service for 4+ hours over the past 2 days and just a minute ago they told me that the issue has no fix and that these lost photos are unrecoverable,” wrote the user. “Adobe is unbelievable some times. All I got was a ‘we’re sincerely sorry’ and nothing else. 2+ years of photo edits just gone because of Adobe and all they give is a sorry, lmao.”

Yesterday afternoon, at 4:30pm Eastern Time, Adobe officially confirmed the issue, explaining that customers who updated to Lightroom 5.4 on iPhone and iPad “may be missing photos and presets,” that those photos and presets are “not recoverable,” and that they “sincerely apologize” to users who have been affected by the issue. Version 5.4.1 has already been released, fixing the issue, but it can do nothing about the lost data.

You can read the full response and resolution to the forum thread below. This was posted to the forums by Adobe ‘Quality Engineer Customer Advocate’ Rikk Flohr:

We are aware that some customers who updated to Lightroom 5.4.0 on iPhone and iPad may be missing photos and presets that were not synced to the Lightroom cloud.

A new version of Lightroom mobile (5.4.1) for iOS and iPadOS has now been released that prevents this issue from affecting additional customers.

Installing version 5.4.1 will not restore missing photos or presets for customers affected by the problem introduced in 5.4.0.

We know that some customers have photos and presets that are not recoverable. We sincerely apologize to any customers who have been affected by this issue.

If you are affected by this issue, please refer to the information this forum thread.

We’ve reached out to Adobe for further comment and clarification, and to see if they’re willing to say how wide-spread this data loss was. But even if the glitch affected only a small number of users, it’s obviously a very bad look when your photo editing app accidentally wipes peoples photos… and edits.

This is also a great reminder for photographers that you should always back up your images, in multiple places, so you’re never subject to a single point of failure. Mistakes like this happen, even at some of the world’s largest companies (see: canon.image).

To learn more about the issue, or if you think you were affected by the 5.4 update, read the official Adobe forum thread here. If not, just make sure the version you’re updating to is 5.4.1 and not somehow still 5.4.

UPDATE 8/20/20: Adobe has posted a small update to the Adobe Help site. It’s largely the same as the statement shared above, but it re-clarifies that Lightroom on Android, the Desktop, and Lightroom Classic were not affected, and encourages users who lost data to try using iPhone or iPad backups to recover their work.

You can read the full support statement here.