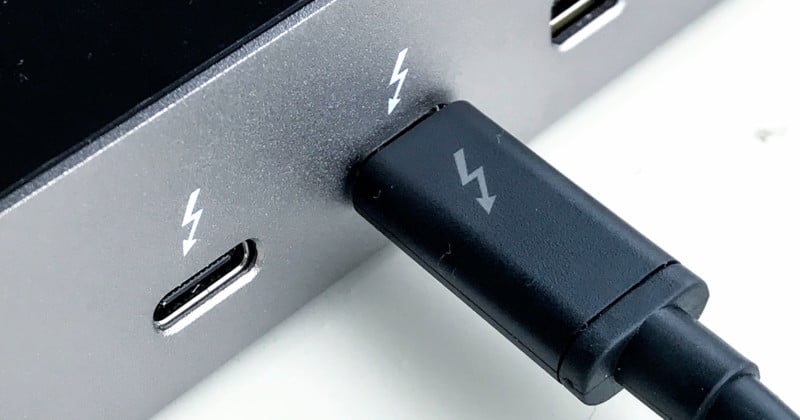 It’s a good week for specifications. Yesterday, we got the new H.266/VVC video codec; today, Intel unveiled Thunderbolt 4: an updated spec that features the same 40Gb/s top speed, but increases the baseline spec so that users get a more consistent (and consistently fast) experience no matter what Thunderbolt-equipped computer or peripheral they’re using.

Usually a new spec means a higher top speed, but that’s not the case with Thunderbolt 4. As we already mentioned, you’ll get the same data transfer rate of 40Gb/s with Thunderbolt 4 as you get with the current Thunderbolt 3 spec. The differences are all on the other end of the spec: namely, Intel has doubled the minimum video and data requirements of Thunderbolt 3.

This means that Thunderbolt 4 devices must offer support for two 4K displays or one 8K display (previously one 4K display), and double the PCIe data speed of 32 Gb/s for storage speeds up to 3,000 MB/s. The new spec will also allow for docks with up to four Thunderbolt ports (one in, three out), universal 40Gb/s cables up to 2 meters (6.6 feet) in length, required charging support on at least one port, required PC wake from sleep when the computer is connected to a Thunderbolt dock, and required intel Direct Memory Access protection.

All of this in a spec that will be fully USB 4 compliant, and backwards compatible with Thunderbolt 3 devices.

This quick Thunderbolt 4 Preview video overs the basics of the new spec, and the chart below lays out all of the differences between Thunderbolt 4 and previous versions (click to expand): Intel is planning to release the new Thunderbolt 4 controller 8000 series later this year—there will be two different controllers for computer makers, and one for accessory makers. According to Intel, the first Thunderbolt 4 equipped devices should show up by the end of the year, “including laptops based on Intel’s innovation program code-named ‘Project Athena'” so we won’t be waiting long to see Thunderbolt 4 in the wild.

To learn more about the new spec and dive into the details, head over to the Intel website.