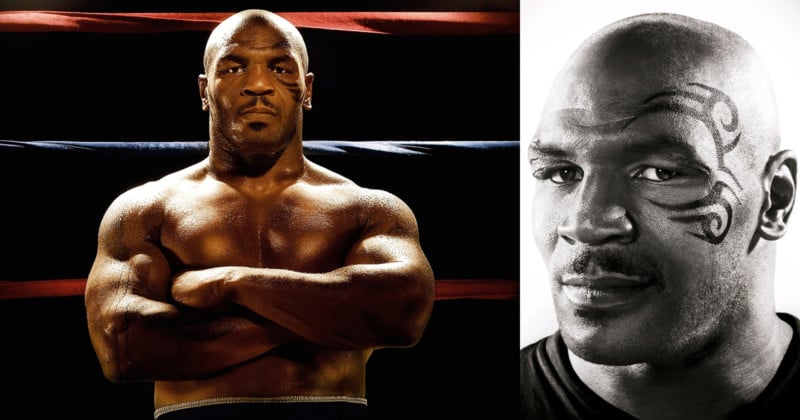 Every so often a photo shoot comes along that both excites you and terrifies you at the same time. Today’s article is about one such experience.

When I was in college—more specifically in Russian History 401 at ASU—I got a phone call and had to leave class, much to my teachers chagrin. It was Getty Images (my rep at the time) with a request for me to photograph the one and only Mike Tyson. To add a little stress to the mix, I had less than two days to prepare for the shoot.

Deciding that it would be best to put my focus towards the photo shoot, I called my parents to come pick me up so I could go home and practice at their house. Keep in mind that I had chosen buying a camera over a car a couple of years prior, so this was my only method of transportation. At the end of the day, my Dad showed up and I loaded my gear into his car so that I could go to their house and practice through the night for the Tyson shoot.

For hours and hours I would set up the lights and, with my camera on a tripod and the 10 second timer on the shutter, I took test portraits of myself as I imagined capturing Mike Tyson the next day.

Where some kept diaries and journals in college, I kept a notebook of lighting diagrams I had created in my head for made-up photo shoots, and it just so happened that I had two extra lighting setups from a shoot I had done of an ASU football player (seen here) previously. I just had to translate the lighting to apply to an athlete without a visor. This meant bringing the key light (a 36-inch ruffled silver umbrella from Profoto) high enough to Rembrandt light Mike Tyson, but not so high that we would lose the specular highlights in his eyes. 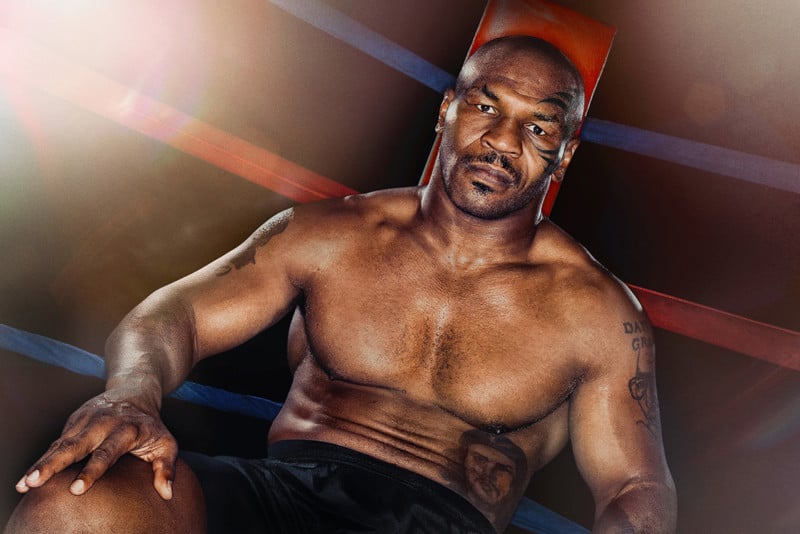 The next day was the shoot, and I probably only got a couple hours of sleep due to the night’s lighting practice; however, if I could create a couple decent images of Iron Mike, I knew that the tiredness would be worth it. My friend Mike (not Tyson, different Mike) came to the house and we loaded up the gear and drove to a boxing ring in a rough area of town where we would setup and photograph Tyson.

As soon as we arrived, I knew that this was going to be a very different shoot than I was used to at this early stage of my career.

I should mention that, at the time, it was nearly summer in AZ; the temperature was easily in the hundreds outside, yet despite this, after knocking on the metal door of the studio, a guy with slicked back hair and decked out in an all-leather suit answered the door.

I imagined that they didn’t expect a young kid to show up to photograph Mike, and that was confirmed when the imposing leather-clad guy stepped out and said, “waddaya want?” I explained that I was here to photograph Mike Tyson, and he seemed to think I was the assistant. He looked at my friend and me and said that we could load in the gear we were going to use whenever my full crew arrived. It took him a minute to realize that we were the full crew, before he begrudgingly let us enter.

Walking into the sparsely lit warehouse, we were greeted by a lineup of Mike Tyson’s posse strait out of a Vegas sitcom. There was leather suit guy, there was an all-white suit guy with red sunglasses on despite the dark room we were in, and (I sh*t you not) there was a guy with a briefcase literally hand-cuffed to his wrist. We were looking at a real-life caricature. But still no Mike Tyson.

Nevertheless, we proceeded to bring in gear, do the preliminary setup of the light stands, find where we would draw power, and so on. Then, without any preamble, Mike Tyson walks in and, before any introductions were made, leather suit guy walks over and says, “Mr. Tyson would like to do a workout, and we need everyone to step outside the warehouse until he is done,”

I asked how long this would be. He responded, “sometimes 10 minutes, sometimes a couple hours.” 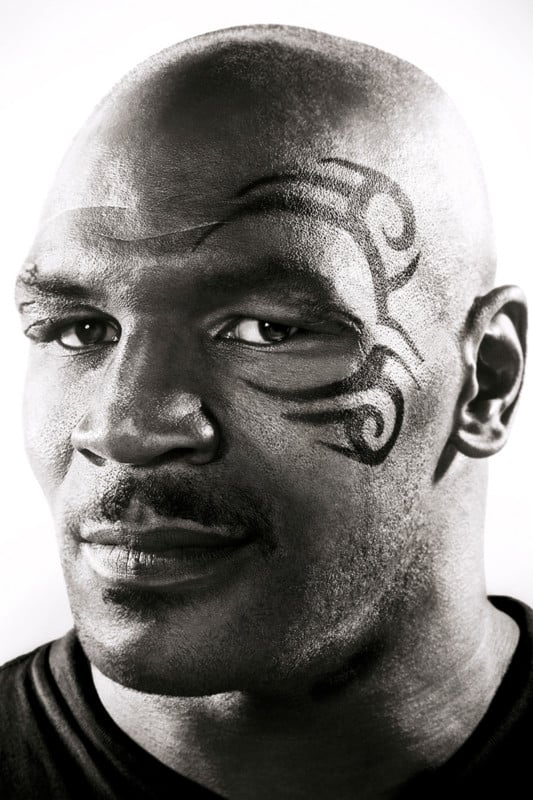 And so that is how my friend Mike (again, not Tyson) and I ended up standing outside, in the hot-as-hell (technical term) Arizona sun, in a bad neighborhood, next to the metal door of a sketchy warehouse waiting for Mike Tyson to finish his 10-minutes-to-two-hours workout. To make matters worse, this is at a time before smartphones existed. We would be spending the next couple of hour trying not to get mugged or sun burned too badly because I’d left the keys to my parent’s car in my camera bag and didn’t want to risk going in unannounced to retrieve them.

When the workout was over (about an hour) we were finally let back in, and immediately started setting up the first shot. It was an image that I had laid out of Tyson in a stoic stance, arms crossed, punching the camera with his eyes (yes, I asked him to do exactly that).

I was using my Canon 1D Mark II and trusty 85mm f/1.2 L. At the time it was my go-to for portraits, and it would be a few more moths until I was able to afford the Canon 1Ds Mark II (which would become and remain my workhorse for quite some time). On the lighting side, we had a couple Profoto Acute 2R 2400 kits and two heads for each. While I progressed on to using a lot more lights later in my career, it was all I could afford at the time and allowed me to control lighting in a schematic that was divided into quarters.

At this point, we were ready for the first shot. A couple minutes later, Mike Tyson came out of the locker room and walked straight up to me – I still get goosebumps thinking about this. I was never a big boxing fan, but I still knew what this man meant to the world of sport. As he walked up, he didn’t seem tall like some of the football players I had worked with, but there was no question that he was in incredible shape.

Then came the most memorable moment of the entire photoshoot for me: he shook my hand.

Now, when Mike Tyson shakes your hand it is not like anything you have ever experienced before in the world of hand shakes. When he shakes your hand, his hand fully envelopes yours, and AT THAT MOMENT you immediately feel the absolute terror that every one of his ill-fated opponents must have realized moments before they slipped into sweet unconsciousness. His hands are not those of a human; they’re steel wrecking balls mounted to a chassis of a man who can swing them at speeds that would pulverize any unlucky chap who happened to get in their way. 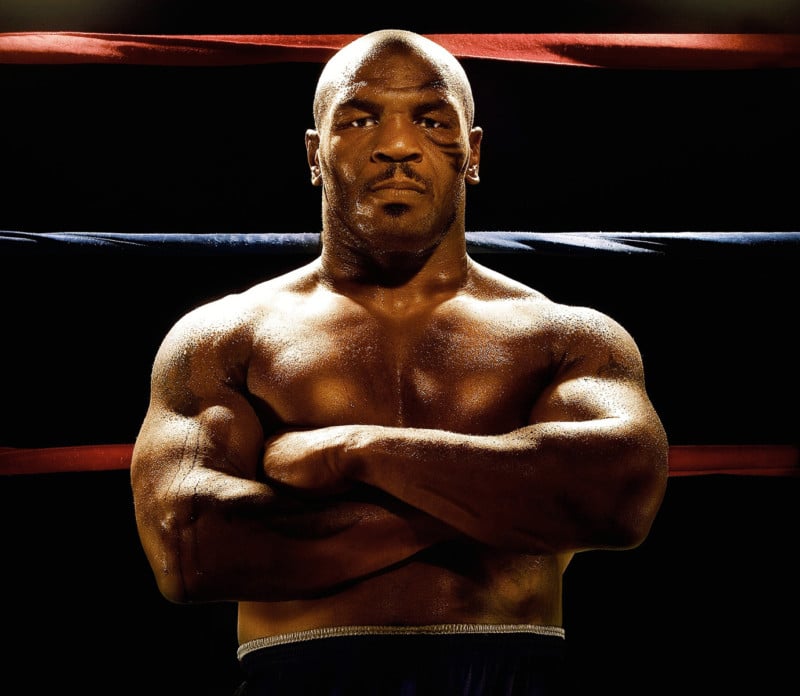 At this point you’re probably thinking, with Iron Mike being the most feared man in the ring for so many years, that it must be extremely intimidating to work with him. But this was not the case, not even close.

Over the years since that shoot, I have come to find that the more dangerous a sport an athlete is in, the more relaxed they are in front of a camera. This idea held very true as, on many occasions, I had to redirect Mike’s expression into one of intensity—otherwise he kept smiling every time when I raised the freaking camera to my eye!

As we progress through the shoot, we got to a shot where I mounted a Profoto ring flash to the Canon and had Tyson sit on a stool in the corner of the ring, still was damp with sweat from his workout. I was balancing out the harshness of an on-axis ring light with a medium soft box to fill in some of the shadows where the light fell off. It was at this point that, without thinking, I asked my assistant, “Mike, can you move the fill and drop it by a stop?”

It was lost on me that Mike Tyson thought I was asking him to make this lighting adjustment. His face shifted into immediate confusion, and at that moment I saw an expression from him that I hadn’t seen before. I snapped only one frame before it had gone, and the image below is it. 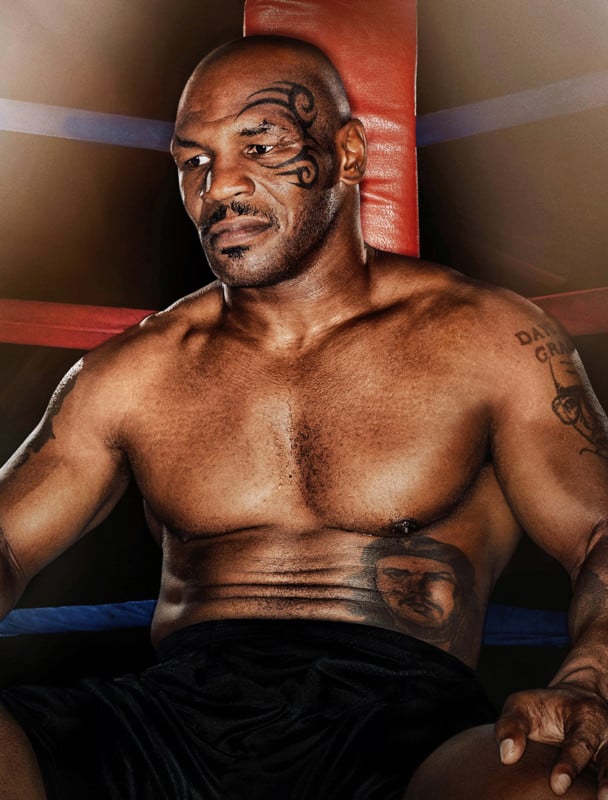 As we wrapped the set and the day, we (me, Mike and Mike) stood in the boxing ring and talked cordially. For every interview I have ever seen of him, or comedian doing an impersonation, the voice that sometimes goes comically nasal-y was not there. It was replaced by a normal, and very kind man. Before leaving, he shook my hand as well as my assistant’s and walked back into the locker room.

As soon as his back was to us, my assistant turned around to me, looked at the hand Tyson had just shook and then looked at me and mouthed, “holy sh*t, his hands are huge!!!”

As a funny little aside to this whole photoshoot: at the time, I had a pair of “lucky shooting jeans” that I liked to wear on set. I was indeed wearing them on this day, and while I was putting away the Profoto 36 umbrella, I pushed too hard to get it into the cloth case and put the top of the umbrella through the case, through my jeans, and into my leg.

Trying not to make a commotion in the presence of the “posse,” I acted as though nothing had happened. We simply walked out with the gear, my lucky jeans forever ruined with a three-inch hole, and a bloody leg. They were good jeans… they will be missed.

This is a Solargraph Shot on Antarctica