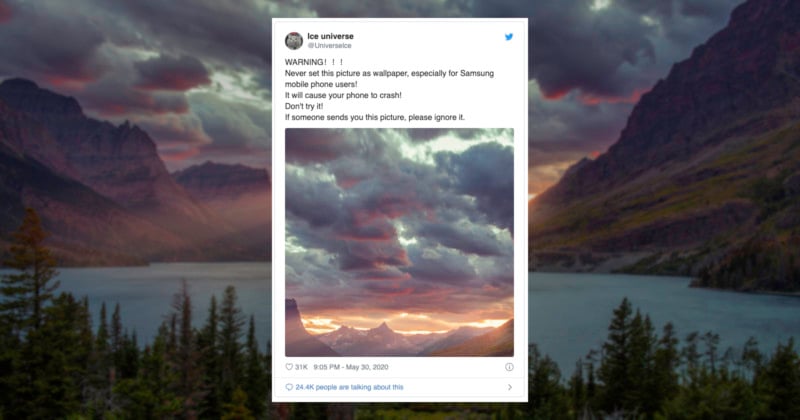 Last week, landscape photographer Gaurav Agrawal watched one of his photos go viral for all the wrong reasons. Thanks to a Lightroom export mixup, an image he took at Glacier National Park began bricking Android phones around the world.

In an interview with the BBC, Agrawal explained what happened, revealing that it was an honest and unintentional mistake, and sharing what it was like watching his photo break thousands of smartphones as he sat helplessly on the sidelines.

The photo itself—a beautiful sunset shot captured “one magical evening in August 2019″—was taken at St Mary Lake in Glacier National Park using a Nikon D850. On an evening when he’d almost given up because of bad weather, god rays of sunlight began breaking through, allowing the seasoned landscape photographer to capture what would, under any other circumstances, be considered a stunning shot.

Unfortunately, when it came time to export and share the photo after a few edits in Adobe Lightroom, he picked the ProPhoto RGB color space; that, it seems, was the root of the problem.

The color space attached to the photo is unreadable by a large number of Android phones, mostly those by Google and Samsung. When set as the wallpaper on the standard version of Android 10, sRGB is required, and the disparity sent these phones into an infinite re-boot loop. The issue is referred to as a “soft-brick,” because it was often only fixable by performing a factory reset and losing any data that wasn’t backed up.

This fact was discovered and shared widely on Twitter, causing the photo to go viral and inadvertently leading to thousands of phones being bricked as some Android users couldn’t resist the temptation to try using the photo themselves.

WARNING！！！
Never set this picture as wallpaper, especially for Samsung mobile phone users!
It will cause your phone to crash!
Don't try it!
If someone sends you this picture, please ignore it. pic.twitter.com/rVbozJdhkL

Agrawal tells the BBC that he’s sad about what happened. Since he’s an iPhone user (and always uses a photo of his wife as his phone background) he had no idea that choosing the wrong color space could cause such a kerfuffle.

“I didn’t do anything intentionally. I’m sad that people ended up having issues.” says Agrawal. “I hoped my photograph would have gone ‘viral’ for a good reason, but maybe that’s for another time… I’m going to use another format from now on.”

Hopefully that format is sRGB… but even if it’s not, there is good news on the other side of this debacle. Not only have many developers already submitted fixes to Google, but it seems the latest version of Android, which is now in public Beta, won’t have this problem… no matter what color space you prefer.