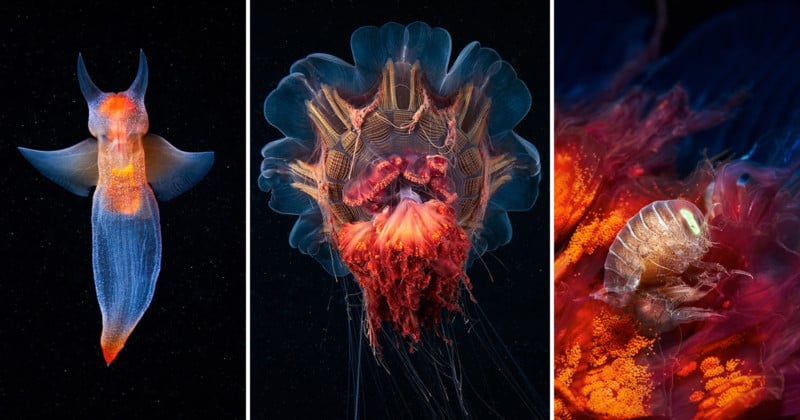 Alexander Semenov is the head of the scientific diving team at the White Sea biological station of Lomonosov’s Moscow State University. But he’s also a marine biologist, and an exceptional underwater photographer. And nowhere is that more obvious than his ethereal portraits of so-called ‘Sea Angels.’

Semenov began his underwater photography journey in 2008, and since then, he’s had the opportunity to work with many amazing people and share his photos through world-renowned publications. You’ll find his work featured in Nat Geo, TIME, Smithsonian, Scientific American, and he’s worked with major companies like Apple, EIZO, Nikon, and Dolby.

Because of his job, his specialty is “cold-water fauna,” a subject that is absolutely unforgiving to photograph.

“Studying cold-water fauna is not a task for the faint-hearted, mainly because the conditions are so extreme both in and out of the water,” he tells PetaPixel. “Long polar nights, freezing temperatures, ice-covered seas, strong currents and often harsh weather conditions mean that field work is only possible for a few months each year, and only after very rigorous technical and physical training.”

Going on a dive involves taking an ice drill and special saws out onto the White Sea, where they make triangle-shaped holes in the 0.5 – 1.5 meter thick surface. Dives can only happen in the 40-60 minute intervals between high and low tide, because the currents are so strong that a diver who is carried away “is difficult to pull even on a rope.” All of this, and the requirement of carrying ropes everywhere you go, makes for a very frustrating shooting environment.

“It’s awfully uncomfortable to shoot – you have to constantly put the camera down and exchange signals with the surface, pulling the rope in a special manner,” explains Semenov. “But all these inconveniences pay off more than when you see the landscapes that appear before you, and even more so when you meet the first inhabitants of the underwater world.” “In winter the water in the White Sea is incredibly clear, because on a polar night there is no sun – so no photosynthesis, and therefore the water will have less microscopic phytoplankton and zooplankton, which eats it,” says Semenov. “There is also no wind and wave mixing of water, because the sea is covered with ice, as well as all streams, rivers and swamps that flow into the sea in summer and bring a heap of organic suspension.”

“In short,” he continues, “the water under the ice is most often crystal clear, with visibility of up to 40-60 meters, while for more than half a year visibility rarely exceeds 6-8 meters.”

For an underwater photographer, this is bliss.

A bliss that is only amplified by the sheer variety of underwater life you’ll find in the depths of the White Sea. You might think that the northern seas are “lifeless deserts where only sad-looking fish circle the cold darkness,” says Semenov, but you would be wrong.

“Each boulder and every square meter of the sea floor is home to tens, hundreds and thousands of different creatures: a vast colourful forest of sea anemones, sea squirts, sponges, bryozoans and colonies of hydrozoan polyps, with an infinite number of polychaetes, amphipods, sea spiders and many other underwater creatures scurrying among them,” says Semenov. “In the dark depths of the water above this forest, giant crimson Lion’s mane jellyfish slowly glide along, astonishingly beautiful pteropod mollusks called Sea angels drift elegantly, and predatory comb jellies sparkle like little rainbows.”

After nearly 13 years as an underwater photographer, Semenov still has no fear of “running out” of incredible subjects to shoot.

Scroll down to see some of the amazing imagery and video footage he’s captured: 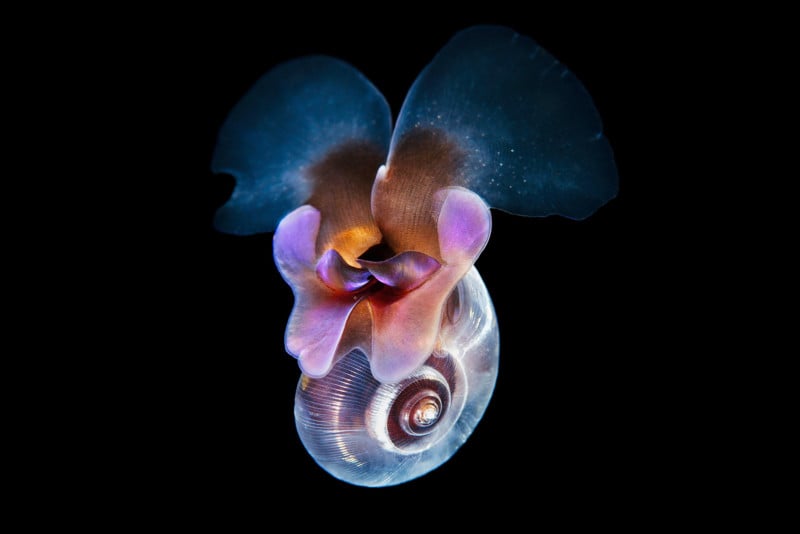 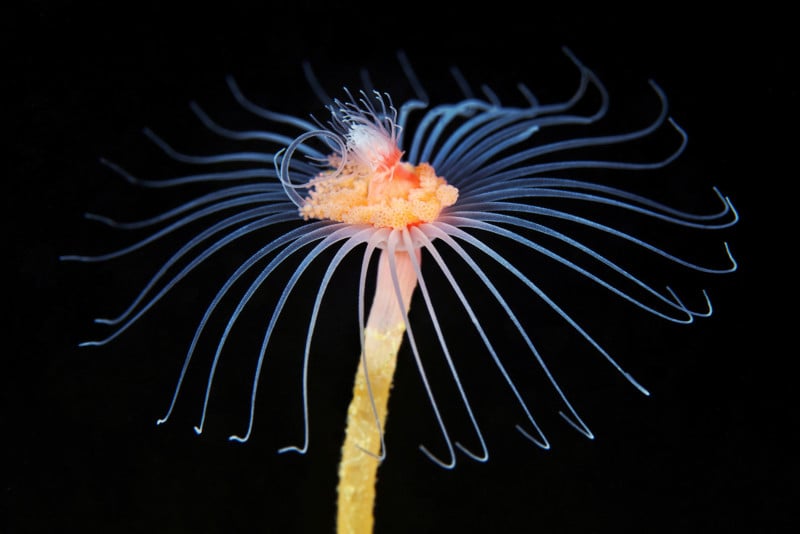 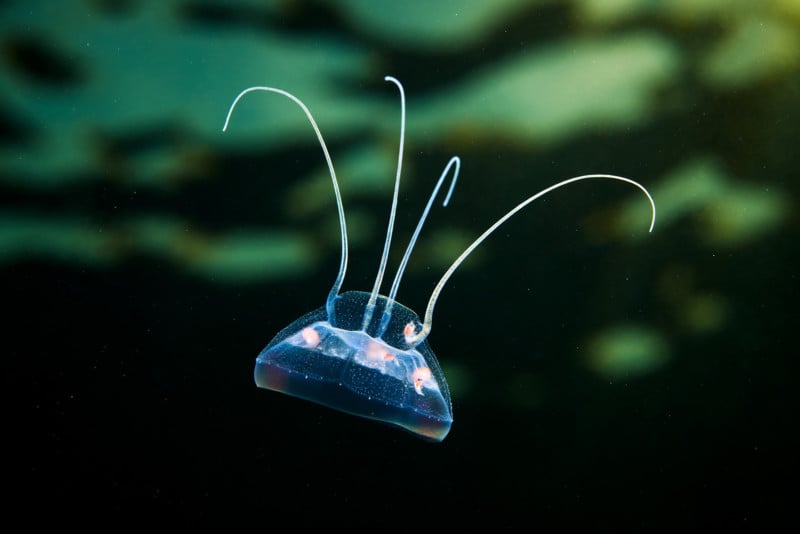 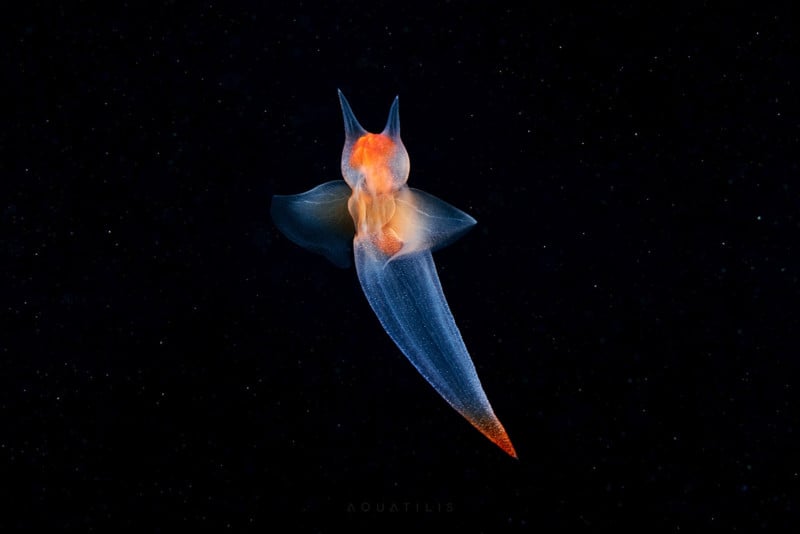 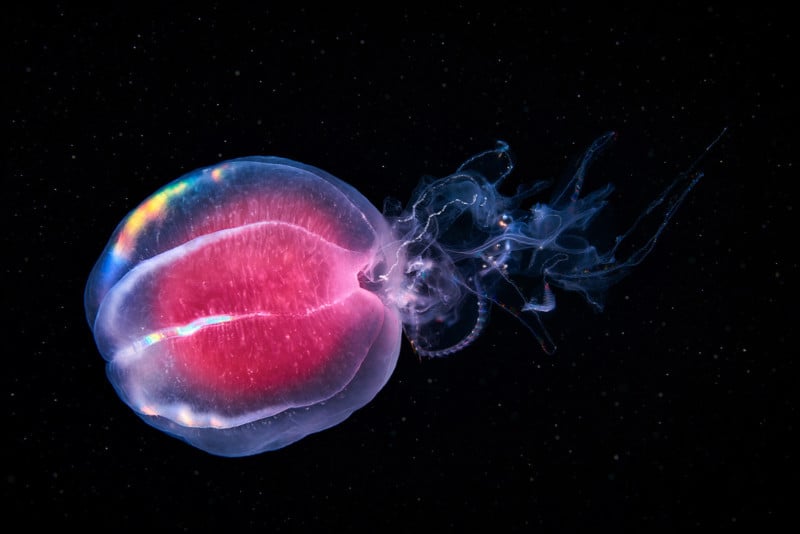 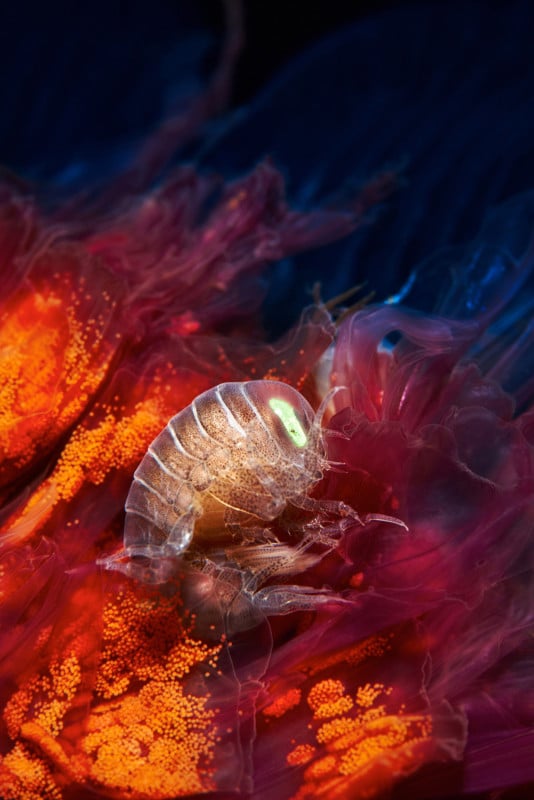 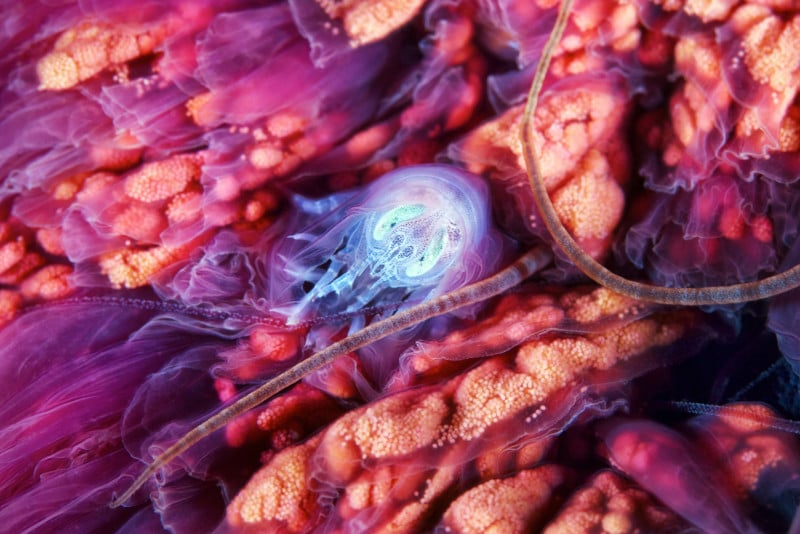 In terms of gear, Semenov (who obviously gets this question a lot) says that choosing a camera is “like choosing a religion,” although he’s pretty clear on his opinion of GoPro as a diving camera (No…).

“All I can say in 2020 is that it’s possible to make incredible photos and videos with almost everything,” says Semenov. He started his career on a Canon 400D, but eventually switched to Nikon and now uses the “nearly perfect” D850. In terms of lenses, he’s a “lifelong Zeiss fan,” using a Zeiss Milvus 25mm f/1.4 for wide angle and Zeiss Milvus 50mm f/2 Macro, though he had to adjust the manual focus rings for underwater work.

For video, his workhorse is a Panasonic GH5, though he just recently upgraded to a Panasonic S1H that has been blowing him away above ground. He’s saving up for an underwater housing for it…

Speaking of which, his underwater housings come from Austrian company Subal—machined out of a solid block of aluminum, these are “the best housings I have ever tested for these conditions,” not least of all because you can literally use them to break the ice in a pinch.

Finally, for lighting, he uses Z-240 strobes by Inon for photo—because “despite their modest size and weight,” Semenov has found that “they have enough power for almost any situation” and they’ve been insanely reliable. His video kit includes various Russian-made AMG lights that can provide up to 12000 lumens of power, making them doubly useful for “especially dark dives.”

Here’s a quick peek behind the scenes—a look at Semenov’s “office” life: 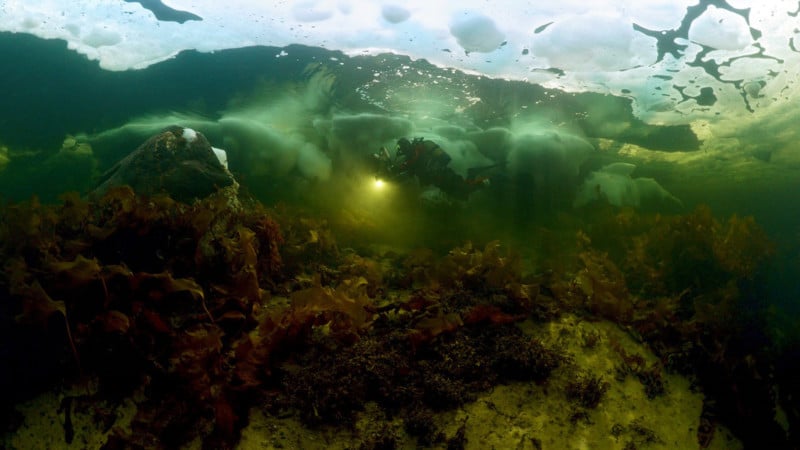 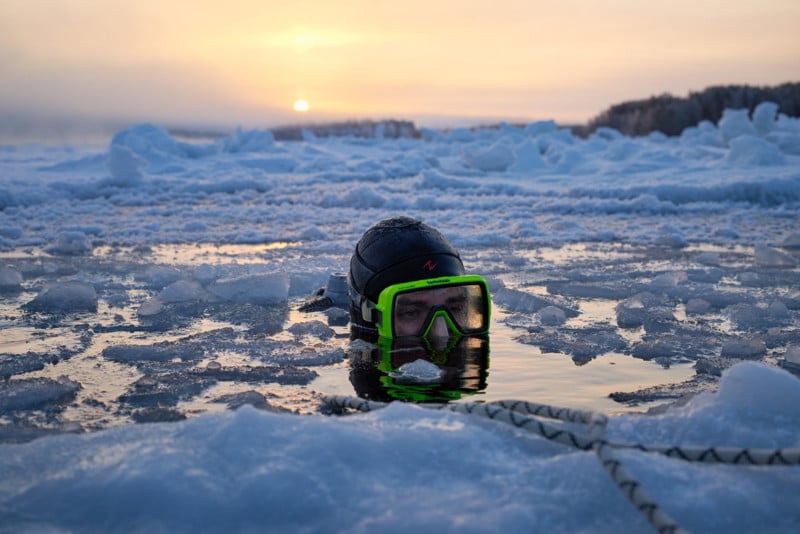 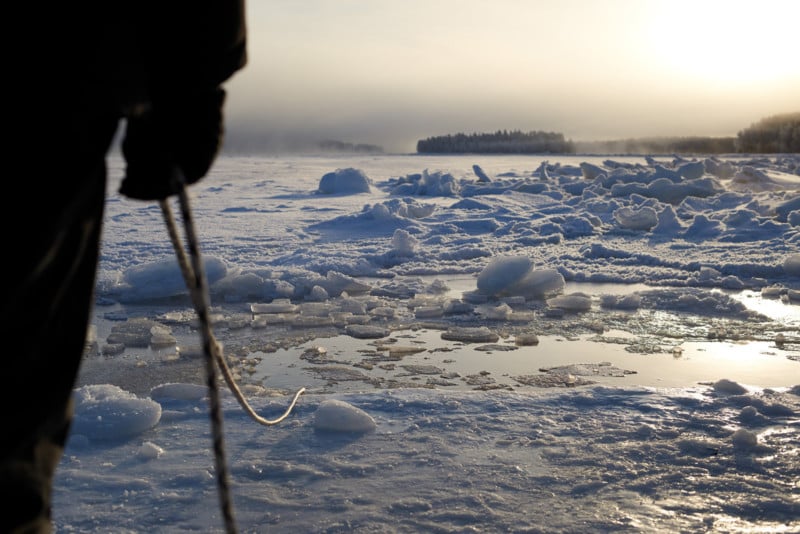 Today, Semenov is “stuck” on a small fishing island called Ponza in the Mediterranean Sea. What was originally supposed to be a 3-week expedition “just stretched to 3+ months and still going with this quarantine.” Still, he feels incredibly lucky, because he still gets to dive, even under lockdown.

“We had a chance to work in the sea even under the global lockdown, and it’s incredible opportunity and luck,” he tells PetaPixel. “We’ve already got so many cool footage and even “new for science” things here, and hopefully we will include this in our next documentary.”

You can already see some of what they’ve been shooting here.

And if you want to see more of Semenov’s work or check out the documentary filmmaking, visit his personal website or check out this educational project “Aquatilis Expedition” on Instagram, YouTube, Russian’s VK social network, and Facebook. There’s plenty there to keep you entertained, inspired, and learning during lockdown, even if you can’t go out and dive yourself.

Image credits: All photos by Alexander Semenov and used with permission.