About two weeks ago, we went fishing with our little fishing net from off of our backyard jetty. All of a sudden, we caught this strange but fierce-looking creature. Apparently this dark and mean looking beast was lurking beneath the depths of the channel that lies at the far end of our backyard. I immediately recognized it as being the larva of a dragonfly.

Size matters here, and judging by this I was pretty sure this had to be the immature form of the Blue emperor dragonfly, or Anax imperator, a common dragonfly in the Netherlands. Talk about the catch of the day!

As soon as I could, I pulled out a pickle jar from the shed, topped it off with water from the channel, put some plants in it and last but not least: the larva. Now why would one do that, you might ask yourself. Let me explain…

Dragonfly larvae live the longest part of their life beneath the water surface. Depending on the species, this can be everything from 3 months up to 5 years! If it’s time, they crawl up some reed, grass, or even the stem of larger plants, settle in and start the process — a sight I have seen many a time already. Outside.

This particular dragonfly had been in the water for some 2 years now and looked like he was nearly ready to molt. One can tell from several different features that it’s almost time to begin the greatest transformation of its life. From the fully-developed wings on its back, eyes that almost touch each other in the middle part of the head, and the fact that it isn’t hunting and feeding. The latter I only found out when it was in my pickle jar, of course.

So I knew this beast was ready to rumble. And I knew what lay ahead. The most stunning looking and epic dragonfly you have ever set your eyes on. A striking difference with the way it looked now, which is a darkish kinda brown with clumsy legs and goofy eyes.

Luckily for him, and me, it was only a matter of time before it would slowly but surely show signs of his inevitable fate. Exuviate!

I don’t know what triggered him, or if it was by his own decision perhaps, but last Sunday evening around 9 pm he started to act nervous. Lifting its little head above the water and pumping and jerking its abdomen like nobody’s business. Could this be it? I knew this species likes to molt at night, so why couldn’t this be it? And for sure, it was.

For almost two hours nothing much happened. Crawling up the stick for about an inch and coming back down again. But then, he clearly made a choice. Within seconds he was at the end of the stick and stayed there. The jerking went on, so did the reaching higher and higher with its little legs. But the stick I arranged for him sadly wasn’t any higher. Clearly kind of a let down for him. Sorry, buddy!

In the end, it didn’t matter all that much to him. He was fine with the length he had been given. As he settled in and made sure he had a tight grip with all six legs, I prepared the studio. Or what had to be the studio for this shoot: our home office. Practically a small zoo in the spring season, from which we can also work at home due to the corona-lockdown.

I quickly set up some bright lights and a white umbrella to diffuse the light somewhat and pulled out the camera. I decided from the distance I was from the dragon, an aperture of f/7.1 would suffice for the depth of field I needed. Squeezing the aperture even more would mean not-the-best-ISO values and I wanted to go for full detail this time.

As if the beast understood the concept of time, at exactly midnight its back tore open and the first color emerged. The most alien-looking shade of green made its appearance in the room and from that moment until 3 am I took some 200 shots from the whole molting process. I never made such clean and detailed shots before! 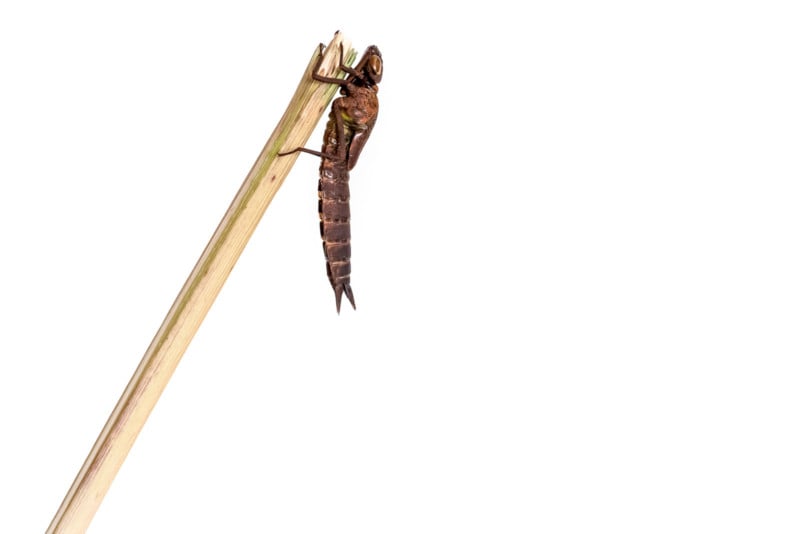 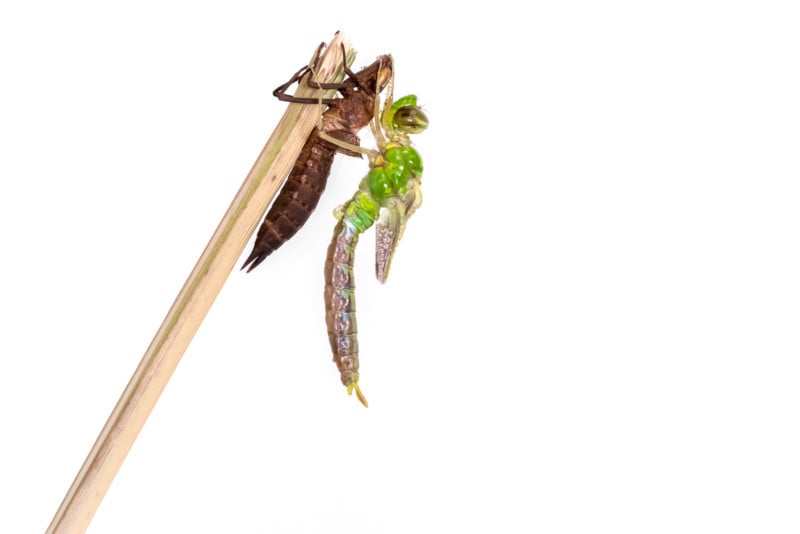 In the morning, he was still there of course. I took him outside and in our garden I took the last shots of him before it flew off. Up and away it went! I’m hoping he’ll find a female soon and take care of his DNA. This one is strong. And insanely beautiful, if you ask me…

About the author: Chris Ruijter is a nature photographer based in the Netherlands. The opinions expressed in this article are solely those of the author. You can find more of Ruijter’s work on his website and Instagram. This article was also published here.