Photographer Kim Farrelly has had a hard time getting a capture card to use with his Fuji X-T3. They’re all either sold out, or being re-sold at an insane markup. So he figured out a hack that allows him to get a high-def feed from his camera using just a USB cable.

This particular hack is specifically to MacOS (there are many similar tutorials already out there for PC users), though it shouldn’t be limited to Fuji cameras. It works in two broad steps: first, you remove the “signature authorization” required by Zoom to recognize the camera as a webcam; then, you install two free pieces of software to pipe an HD feed from your real camera into your computer, and over to Zoom or OBS or whatever app you want to use.

The two apps are CameraLive (download this version), which pulls the feed from your camera, and CamTwist, which syphons that feed over to the app of your choice. 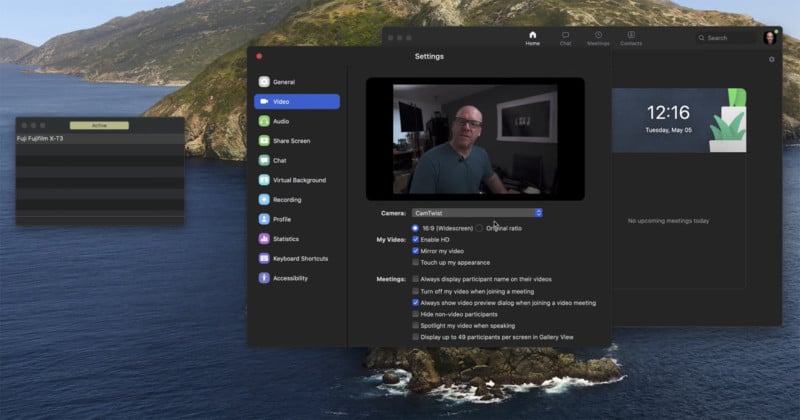 Farrelly explains these steps in detail in the video above, as well as in the video description here. If you’re comfortable writing that one line of code in Terminal, and piggy-backing two pieces of software on top of each other, you’ll be up and running in no time.

Important to note that this is a hack, so your mileage may vary. But several commenters on Farrelly’s video have already confirmed that this works for them.

While it would be nice if every camera maker followed Canon’s lead and released their own webcam utility, we don’t have that luxury. Plus, even Canon’s beta is PC-only. So if you’re a Mac user and you’ve been hoping for a workaround that applies to you, give this a shot and let us know how it worked out for you in the comments. Farrelly obviously was only able to test his Fuji X-T3, but this should work with any camera that is capable of tethering to a program like Capture One.

New York Rhapsody: A Cinematic Love Letter to the Creative Heartbeat of NYC

Hands On with the 13-Inch MacBook Pro: Half the Update We Wanted