Australian comedian Lewis Spears is known in his home country for fake stories to news outlets. Last year, Spears traveled to Los Angeles and pretended to be a famous photographer at a popular photo spot. He managed to fool not only aspiring Instagram stars but a national media outlet crew as well.

The experience was documented in the 8-minute video above (note: there’s some strong language).

Armed with a compact camera, Spears paid a visit to the iconic Paul Smith pink wall on Melrose Avenue that’s daily being used as a backdrop for Instagram portraits. He was there not as comedian Lewis Spears, but “Clive Palmer,” a famous fashion photographer that has photos featured in Vogue Australia.

His first order of business was getting aspiring Insta-stars to pose for his camera and do absurd things — things like shouting at the camera or pretending to drink out of a shoe.

As he was carrying out his shenanigans, however, Spears was delighted to see that a crew from ABC News had rolled up. Emmy Award-winning journalist Lana Zak had arrived to do a story for the late-night television news program Nightline.

Spears managed to get himself in front of the news camera for an interview with Zak. His expert insights were so compelling that he even got Zak to pose for his camera and bite into an onion. 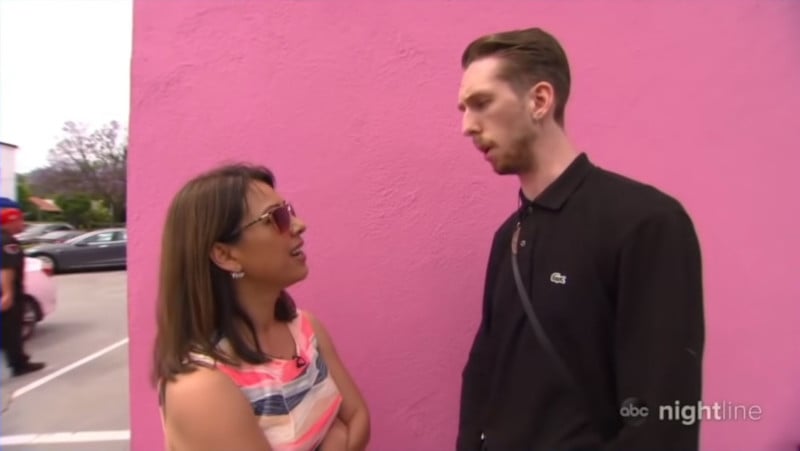 And yes, a few seconds of Spears’ interview did air in the Nightline segment to a national audience in the US on September 20, 2019.

(via Lewis Spears via Fstoppers)

Update: Just to be clear: ABC News didn’t run a segment about Spears, but rather he fooled the news crew at the scene — including getting the reporter to bite into his onion — and got a few seconds of his persona (without any name or introduction) included in a 6-minute segment about Instagram culture and a different artist.

“We never use any name or describe him as a famous photographer, in all honestly he was just one of hundreds of people taking photos there,” Zak tells Fstoppers. “He claims he ‘tricked’ us into running a fake story about him, but the story is never about him and misses the point of my report about our Selfie-obsessed society in which I explore the idea that people can become what they say they are just by saying it.

“But here’s where Spears seems to go from a satirist to a bully, if he did in fact watch my piece and understand it, he appears to be lying to his viewers about what we reported. Our story, which we worked on for months before Spears bumped into us is a critical look at Instagram-obsession and a profile of an actual performance artist called, ‘Matty Mo: the most famous artist.’ I stand by my reporting and my hard working team.”

You can watch the Nightline segment here.

My Friend Sent Me on a Photo Quest During Social Distancing