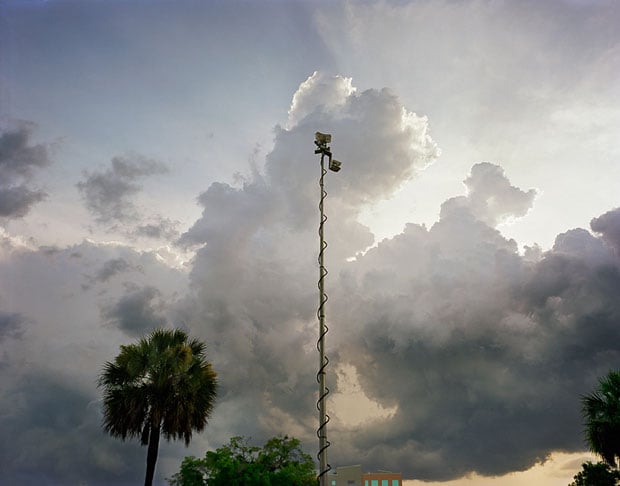 In the early 2000s, NYC-based photographer Christopher Dawson noticed that even though major events were going on around the world, major news organizations in the US often remained fixed on stories involving the rich and famous. Due to the fact that stories involving celebrities often result in more eyeballs and advertising dollars, things like Britney Spears’ custody hearing or Michael Jackson’s molestation trial would attract a disproportionate amount of attention.

Starting 2004, Dawson began to create a series of photos with the camera pointed at the newsmakers rather than the stories. The ongoing project is titled “Coverage.”


The photographer takes his 4×5-inch view camera and visits scenes where individual people are “thrust into the forefront of the nation’s attention.

I’m interested in the bizarre transformation that this massive enterprise brings to the landscape, and the means by which information is being produced and distributed at this important juncture in our history.

Each picture in the Coverage series is titled after the famous subject, though he or she is absent from the frame. In aggregate, the titles could function as a survey of who commands attention in early 21st Century America, while the images look at the assembly-points of public fascination.

Here are some of the photographs in the series so far:

You can find more photos from this series over on Dawson’s website.

Coverage by Christopher Dawson (via Wired)

Image credits: Photographs by Christopher Dawson and used with permission