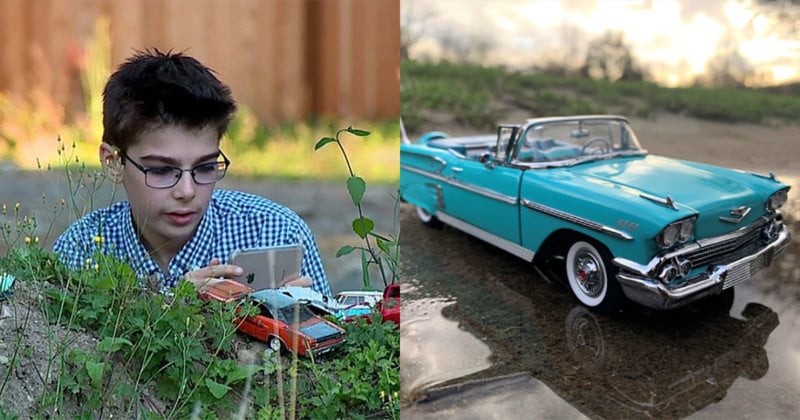 Anthony Schmidt is a 12-year-old boy on the autism spectrum who is making a name for himself with his iPhone photography. His passion is photographing model cars so that they look life-sized, and he has raised over $42,000 on Kickstarter to have his work published as a coffee table photo book.

“From an early age, [Schmidt’s] passion for cars was evident,” the ongoing Kickstarter campaign states. “He began collecting miniatures, seeking ever more realistic models that accurately capture the beautiful details of their real-life counterparts.

“Soon, he began to take pictures of them with his mother’s iPhone, casting them in increasingly elaborate scenes. These photos quickly became popular on social media, gaining thousands of followers who’ve been inspired by his ability to find a unique outlet for creative expression despite facing significant challenges.”

Schmidt has published over 2,200 of his photos to his Instagram, which now has over 7,700 followers.

Schmidt’s story and work was featured in September 2019 by the local news station Q13 FOX:

Schmidt’s Kickstarter campaign has raised $42,224 from 699 backers at the time of this writing, and there are still 11 days to go.

A contribution of $15 has a mug as a prize, $25 gets you a print, and $50 or more will get you one of the first coffee table books (hand-signed and numbered) if the project delivers on its promises.

Photos of Frozen Waves in an Alpine Colorado Lake