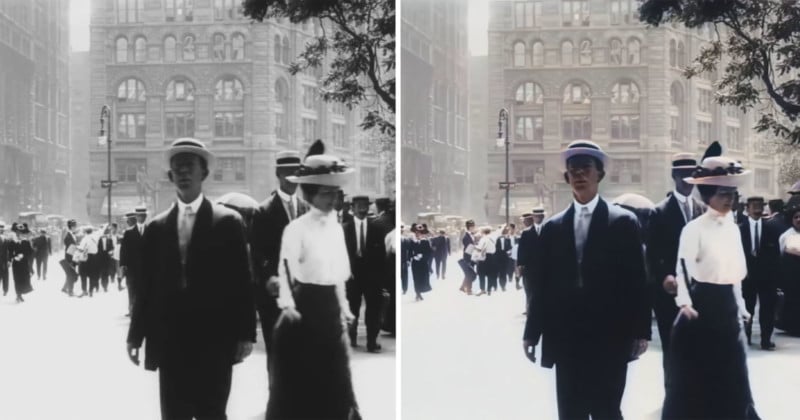 After the success of his last attempt at using AI to upscale a classic short film to 4K and 60fps, YouTuber Denis Shiryaev decided to take this experiment one step further. He took this well-known film of New York City in 1911, and used publicly available neural networks to upscale it to 4K, increase the frame rate to 60fps, and colorize the video.

As with his previous attempt, we expect that the frame interpolation and upscaling were done using Google’s DAIN and Topaz Labs’ Gigapixel AI. That got Shiryaev to 4K and 60fps. Then he “restored the video’s sharpness”—though he doesn’t say what he used—and due to popular demand, he enlisted the “DeOldify” Neural Network to automatically colorize the footage.

Here’s the original, which we actually shared with our readers back in April of 2018:

And here’s the upscaled and colorized version version:

Unlike the short video he attempted first, this is over 8 minutes of footage, but the results are once again surprisingly good—as long as you don’t punch in too close. The biggest disappointment is probably the colorizing, which is okay for some parts and abysmal for others.

Still, the fact that all of this was automatically, and produced such a surprisingly watchable result—creating frames, resolution, and color out of thin air—is mind-blowing in and of itself.

The Best Way to Answer ‘Do You Photoshop Your Pictures?’