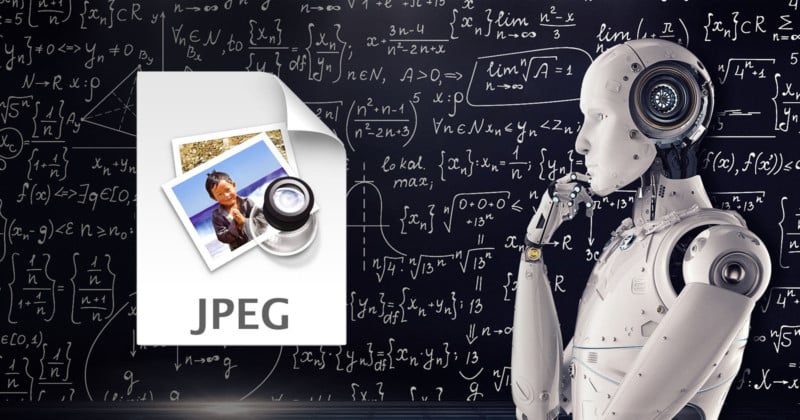 The Joint Photographic Experts Group, the committee behind the JPEG image file, recently held its 86th meeting in Sydney, Australia, and among the topics discussed was using artificial intelligence for greater image procession and using blockchain (the technology pioneered by Bitcoin) for a new system of trust.

At the meeting on February 17th, the committee issued a “Call for Evidence” on learning-based image coding solutions. It’s a continuation of an effort called JPEG AI that the group launched over a year ago.

“This activity aims to find evidence for image coding technologies that offer substantially better compression efficiency when compared to conventional approaches but relying on models exploiting a large image database,” the committee states.

While the existing JPEG compression process uses math to carry out its balancing of file size and image quality, an AI-powered system could use knowledge gleaned from an enormous collection of existing photos to compress new photos even more while retaining the same level of quality. By issuing a Call for Evidence, the organization is taking a formal step toward figuring out whether it should standardize AI-based image compression.

The JPEG Committee is coordinating with IEEE International Conference on Image Processing (ICIP 2020), to be held in Abu Dhabi, UAE in October 2020, to explore possible solutions in papers submitted by researchers worldwide for its Learning-based Image Coding Challenge.

In the face of growing issues such as fake news photos and copyright infringement, the JPEG Committee is looking at blockchain as a potential way to increase public trust and security when it comes to JPEGs.

“Fake news, copyright violations, media forensics, privacy and security are emerging challenges in digital media,” the committee writes. “JPEG has determined that blockchain and distributed ledger technologies (DLT) have great potential as a technology component to address these challenges in transparent and trustable media transactions.”

Invented by Satoshi Nakamoto, the anonymous creator(s) of Bitcoin, a blockchain is an open, distributed list of records in which the blocks containing the entries are chained through cryptography. Such as system could be used to create a public record of who owns what photo or a record of the original versions of photos to prove that subsequent manipulation has not been done to them.

“[B]lockchain and DLT need to be integrated efficiently with a widely adopted standard to ensure broad interoperability of protected images,” the committee writes. “Therefore, the JPEG committee has organized several workshops to engage with the industry and help to identify use cases and requirements that will drive the standardization process.”

Presentations given at recent JPEG meetings regarding media blockchain can be found on the JPEG website if you’re interested in learning more about the technology and the directions that are being pursued.

(via JPEG via Digital Trends)

Image credits: Header illustration based on image by Mike MacKenzie