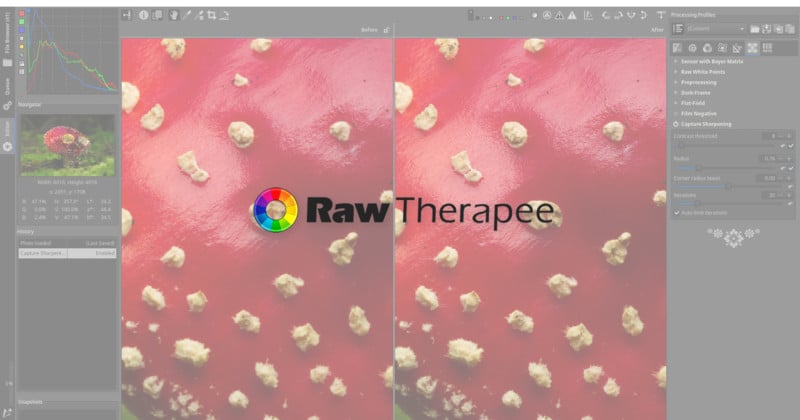 According to the release notes, Capture Sharpening specifically addresses detail that is lost to lens blur (AKA diffraction). “It takes place right after demosaicing, and as it works in linear space it is not prone to haloing,” reads the description. “Capture Sharpening in combination with Post-Resize Sharpening allows for detailed and crisp results.”

People who use RawTherapee as their raw photo editor of choice will tell you that it’s already phenomenal at sharpening, and this only makes it that much better. If you don’t need the cataloging or advanced masking tools available in Darktable, RawTherapee might be your open source Lightroom alternative of choice.

Here’s a sample screenshot of the feature in action (click to enlarge): In addition to Capture Sharpening, v5.8 also features support for Canon’s CR3 format (though metadata is still not supported yet), speedups and optimizations to various tools, better memory management, and various bug fixes.

To learn more about the latest build or try this free raw photo editor for yourself, head over to the RawTherapee website where you can find detailed instructions on how to download and install the latest build on PC, Mac or Linux.

Luminar 4 Sends Data to Facebook in the Background [UPDATE: Statement]