The folks at Vox recently put together a fascinating photography history lesson on a subject we’ve honestly never seen covered: the fisheye lens, and why it’s been so widely used in music photography. Specifically, why we’ve seen it used so often for album covers throughout the decades.

The video starts at the very beginning, in 1906, when physicist Robert W. Wood invented what would become known as the fisheye lens in his lab at Johns Hopkins University by using “a bucket full of water, a pinhole camera, mirrored glass, and a lot of light.” The goal was to create an image that would replicate how a fish sees the world from underwater. The paper was titled “Fish-Eye Views.”

It wasn’t until 1935 that german inventors filed a patent for an optical lens that more-or-less recreated this phenomenon using glass instead of water: a patent for a 180° circular fisheye lens that they shared with a Japanese company you may have heard of: Nikon. Fast forward to 1957, and Nikon’s first $27,000 180° fisheye lens—an icon among photo history nerds—was born. 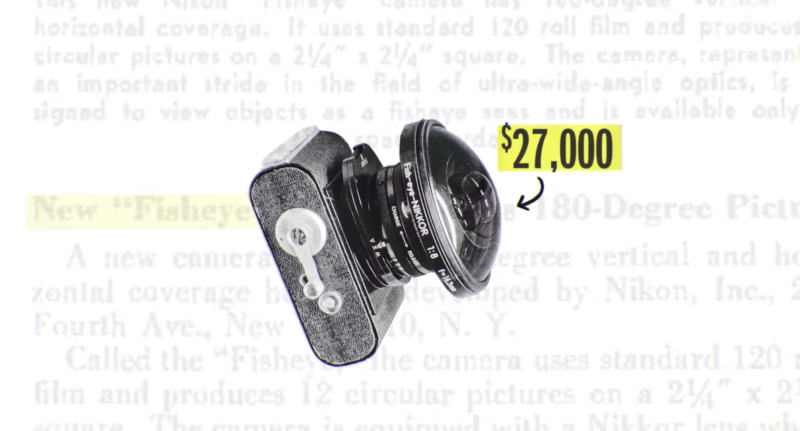 As the video explains, the lens immediately became a pop-culture phenomenon, and proved itself particularly useful in “making rockstars appear larger than life.” From The Beatles, to The Byrds, the Rolling Stones, Jimmy Hendrix and on and on until we finally get to the Harry Styles album cover that kicked off this whole optical exploration, Vox explains how and why this lens has become so iconic within music photography.

To dive deep into this piece of optical history and how it helped to quite literally shape an entire genre of photography, check out the full video above. Like some of the previous Vox photography-themed videos we’ve shared, it’s well researched, educational, and entertaining all at the same time.

Who knows, it may even inspire you to go and pick up a cheap circular fisheye from your local camera store this Holiday season…

SD’s Response to CFexpress is Pretty Much Dead on Arrival