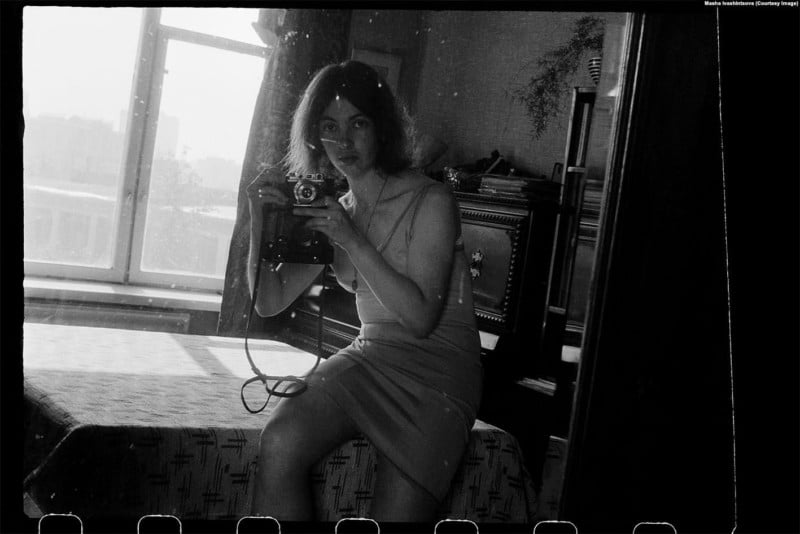 80 photographs shot by Masha Ivashintsova that are on display from December 4 in Tallinn, Estonia. The retrospective is the first of its kind since Asya Ivashintsova-Melkumyan stumbled on 30,000 forgotten photographs taken by her mother that capture a poetic outsider’s view of life in the Soviet Union.

After the March 2018 publication of Ivashintsova’s photographs in RFE/RL and here at PetaPixel, news of the find flashed around the world and the collection was called one of the most important art discoveries of the year. A company headed by an Oscar-winning producer is working on a documentary about the late photographer’s life.

Ivashintsova’s family shared 13 images, some published here for the first time, from the Tallinn exhibition.

Ivashintsova’s daughter, Asya, told RFE/RL that she was surprised at the overwhelming response to her mother’s work, but understands the appeal.

Asya says her mother’s photographs “allow people to be honest with themselves, they show that they don’t need to be understood, they can be lyrical, vague, unsuccessful, and not a photographer, and still create something beautiful.”

After a flurry of media interest and commercial offers, Ivashintsova’s family has largely stepped out of the spotlight in order to retain control over her legacy.

Although she described being “a bit scared” by the overwhelming reaction to her mother’s photos, Asya believes her mother would be grateful for the appreciation her work has received.

One reason Ivashintsova kept her work hidden was because of the famous men of her life, next to whom her own talents, she believed, were trivial.

Ivashintsova wrote: “I loved without memory: is that not an epigraph to the book that does not exist? I never had a memory for myself but always for others.”

Ivashintsova spent much of her adult life locked in a mental hospital — a common fate for people who refused the menial jobs offered by communist authorities.

Only about half of Ivashintsova’s photographs have been digitized so far.

Asya and her husband are continuing to scan the thousands of never-before-seen negatives discovered in the attic.

The Tallinn exhibition runs until March 2020.

About the author: Amos Chapple is a Kiwi photographer who makes news-flavored travel photos and writes for Radio Free Europe/Radio Liberty. He started off at New Zealand’s largest daily paper in 2003. After two years chasing news, he took a full-time position shooting UNESCO World Heritage sites. In 2012, he went freelance but kept up the travel. Since then, he has been published in most major news titles around the world. You can find more of his work on his website, Facebook, and Instagram. This article was also published RFE/RL.

Confirmed: Fujifilm Will Not Attend Photokina Due to ‘Cost Effectiveness’ and ‘Launch Timing’