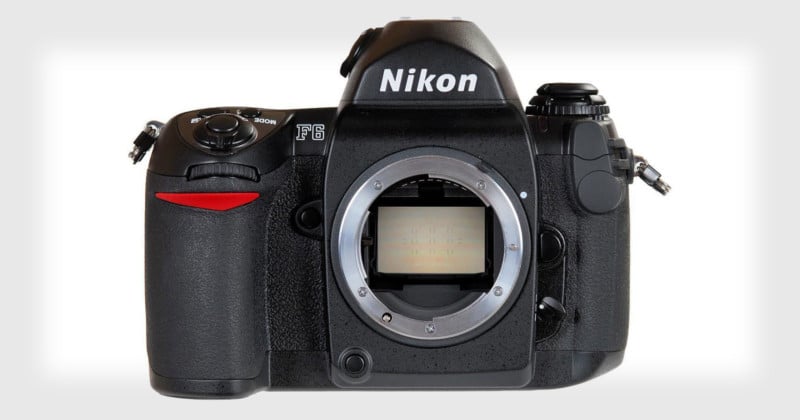 The Nikon F6 was first introduced by the Japanese camera maker in 2004. It was the sixth camera in the Nikon F dynasty, which began 60 years ago in 1959 and totally redefined 35mm photography. Today, the F6 remains the most technically refined, advanced and modern film camera — not just 35mm camera, not just SLR, but camera — ever built or perhaps ever imagined.

Since nearly as long as I’ve been into film photography, the F6 has been rumored to be out of production, and while still for sale, Nikon has just been selling new old stock (NOS).

The number of professional film shooters in the world seems to be fairly low and those of us still trading film for income tend to prefer all manual, often archaic bodies. (Not “film DSLRs,” as my wife calls cameras like the F6.)

We can count the number of new, non-toy 35mm cameras still made on one hand. There’s the Leica MP, Leica M-A, and the Nikon F6. Only in the last several years did we lose all Cosina-made bodies such as the Zeiss Ikon, Voigtlander series, and Nikon FM10, as well as Canon’s F6 competitor, the EOS-1V.

The vast majority of 35mm film photographers shoot on aging, vintage cameras of numerous makes. And this works fine for most of us but admittedly has a limited lifespan.

But there are still a few hardcore film shooters left standing for whom Nikon apparently still builds brand new F6 bodies. Yes, that’s right. NIKON STILL BUILDS THE F6. And Thomas Eisl is one of those hardcore shooters, so I talked to him about his recent purchase. Check out what he has to say!

Me: Why did you want an F6? How does this camera fit into the style of your work?

For street photography, I mostly use a Leica M4P and a digital Olympus OM-D M10 Mark III.

My structured projects pose a kind of antipode to the randomness and chaos which is so typical for street photography and I try to make a definitive statement or comment with each project. The subjects range from documentary and architecture to portraiture and nudes – depending on the story I’d like to tell. For these projects, technical perfection and complete control over the photographic process are very important for me.

As one of the finest 35mm SLR cameras ever made the Nikon F6 was always in my mind as a sensible choice. The F6 is the key to the vast world of F-mount lenses (including the latest ones) making it the perfect camera to shoot virtually every project and subject I want to pursue in the next decade(s).

Why was it important to you to buy a new F6 instead of a cheaper, used copy?

I might take a step back to answer this question and try to formulate my sentiments towards analog photography in the 21st century. Shooting film is a creative decision, a photographer/artist’s personal choice. For most people, I assume, it is not about nostalgia.

Film photography requires analog cameras, old cameras are available and mostly quite serviceable. But I want film photography to be around for another one hundred years, so there is no way around supporting camera manufacturers who still make new film cameras. So I decided to save money and sell some collectible lenses to afford a new Nikon F6.

Trying not to sound pretentious, but tell it how it is: I wanted to take a stand for film photography and also prove to myself that I am serious about my (analog) photographic work.

It’s long been rumored that Nikon has been selling new old stock F6’s, that they hadn’t actually built these cameras for years. How did you verify that Nikon does in fact still build new F6 cameras?

According to my knowledge, the rumor first came up in 2008.

A tour in Nikon’s Sendai factory in Japan around August 2018 showed that the assembly line for the F6 was still there and functional.

When I decided to order an F6 in December 2019, I went to my local camera dealer in Vienna, Austria, Blende7, and asked whether he could order one. Although earlier visits at Nikon Europe’s homepage showed that the camera was on backorder for at least 2 months, he immediately got confirmation by Nikon that a new F6 is on its way.

My Nikon F6 showed the correct date and time for Austria. This means that the clock was set before the F6 was shipped from Japan and that at least the internal battery was (brand) new. Additionally, the camera came with full German documentation, guarantee card and a brand new set of CR123A batteries with an expiration date around 2022. All these things indicate that my F6 was no older than a year, I’d say.

Additionally, I sent an inquiry to Nikon Germany to ask whether the F6 was still in production. The official written response stated that the F6 was definitely not discontinued. Around the 5th of December 2019, the Nikon F6 was again available at the online store – the backorder notice gone.

Taking a look at the serial number of my camera which is 35955 and comparing it to an F6 sold new in 2015 bearing the number 34875 I’d conclude that least 1080 units have been sold since then (approximately 270 cameras per year).

Most film shooters have been getting their cameras from eBay and KEH for at least a decade. What was it like unboxing a brand new 35mm SLR, direct from Nikon in 2019?

Just to describe the circumstances: When I ordered the F6, the owner of the small camera shop immediately offered me a discount and handed over a bottle of wine to shorten the waiting time. On the day the camera arrived, he assured me that he did not touch the box or check its context, brought me a cup of Viennese coffee and asked me whether he could document the sale and unboxing of the legendary F6 by taking some pictures.

Opening the box, removing each layer of cardboard and finally holding the camera of my dreams I knew that I made the right decision and that I did not buy a camera, but a companion for life that I will never ever give away.

It sounds crazy, but I am still mesmerized by the experience.

Thanks for sharing your beautiful new camera with us, Thomas!

If you’re interested in picking up your own brand new Nikon F6 in the US, you can find it at some retailers for $2,549, making it also the cheapest non-toy 35mm camera one can buy new in 2019.

Thanks for reading and happy shooting!

About the author: Johnny Martyr is a East Coast film photographer. The opinions expressed in this article are solely those of the author. After an adventurous 20 year photographic journey, he now shoots exclusively on B&W 35mm film that he painstakingly hand-processes and digitizes. Choosing to work with only a select few clients per annum, Martyr’s uncommonly personalized process ensures unsurpassed quality as well as stylish, natural & timeless imagery that will endure for decades. You can find more of his work on his website, Flickr, and Facebook. This article was also published here.