Last year, I used a custom-built setup to shoot a timelapse of an eternal terrarium in my kitchen. Over the course of 10 months, a camera took two photos every hour of the day, while the plants inside the terrarium grew on their own without disturbance.

I’d like to show you what I did for this project, what kind of technology I used and also what obstacles I faced in the process.

A while ago, I saw a video by YouTuber SlivkiShow (he has channels in Russian, German and English) where he built an eternal terrarium and documented it on several discrete occasions over a period of a few months.

An eternal terrarium has a sealed ecosystem (e.g. it exists in an air-tight glass box), no possibility to exchange oxygen or carbon dioxide, and has to work with the amount of water that is present at the moment of sealing. When it evaporates, the water will gather at the top before later falling down like rain.

I found the idea quite fascinating, but given my background in timelapse photography (mainly in the mountains) I thought it would be interesting to document the growth of the plants inside a glass box in a timelapse video with a fixed camera and seemingly continuous light. I figured I would do this for maybe six months… maybe even a year.

But how do you light a scene continuously for one year and, furthermore, who is going to press the shutter every half an hour or so? I realized quickly that this project was going to be wildly different from the timelapses I had done before.

I knew from the very beginning that if I were to embark on this project, I couldn’t risk using a camera that I wanted to use again afterwards, so I settled on an old Nikon D5000 that I bought used at a steep discount a few months before.

For lighting, my first idea was to set up a continuous source: an LED panel, for example. As the change of day and night would be brighter than the light, I could just put a cardboard box over the scene to block out daylight completely. But if I did that, the plants would probably not get enough light to grow.

I decided, instead, to use one of my Nissin flashes, because then the plants could get as much daylight as they wanted, and the flash would assure the same brightness in the photos at any time of day. Provided, of course, that the exposure settings in the camera were aggressive enough to block out the daylight. I would just need to trigger the flash with the camera, which I did via cable because a wireless transmitter would run out of battery at some point.

As a power source for the camera, I ordered a battery decoy inlet with connection to an AC/DC converter, so that I could power it from the mains. The flash was powered the same way—I attached alligator clips to the pins inside the flash’s battery compartment and connected them to the outlets of a 6V power adapter.

For optics, I used a 50mm Nikon lens and taped down the focus ring to avoid any possible change in focus.

To trigger the camera, I didn’t want to use the internal interval timer, because it would stop after 999 pictures, so I decided to use an Arduino board. The code I wrote for the Arduino worked by shorting the contacts of a trigger cable (connected by alligator clips) by setting a digital output pin to “high” at a given time interval. Each time it triggered a short, the camera and flash would fire.

As a power source for the Arduino, I used an old laptop that was constantly plugged in. This didn’t just provide power, it also meant I could update the code on the fly, if need be, without moving anything around.

If you’re interested, you can go to my website to view the Arduino code for this setup.

I took an aquarium that I had used before (for ‘fruit falling into water’ photos), put a layer of gravel and sand inside as water drainage, and then some soil that I had gathered from a nearby forest. I was hoping that the soil I picked up would include seeds that would then start growing something on their own. I finished with a thin layer of dark potting soil to have a more even image and so I could see better when something started to grow.

Before sealing, I also added a few seeds from the kitchen (cress and basil) because I knew that at least they would grow easily. (read to the end to get my later opinion on that…)

I poured in some water (how do you know if it’s enough? Hint: at first it wasn’t enough), cleaned the glass on the inside carefully, and then sealed the top off with the glass from a picture frame and some silicone sealant, making it air-tight.

I built a practical setup out of spare wood to hold the terrarium and the camera in the same relative position to each other for the whole time, and coated parts of it black to cut down on reflections.

I screwed the camera to a block of wood with a standard tripod screw and then glued the wood to a base plate (no glue on the camera). I also built a holder so that the flash was always in the same position on top of the terrarium, and painted it black as well. 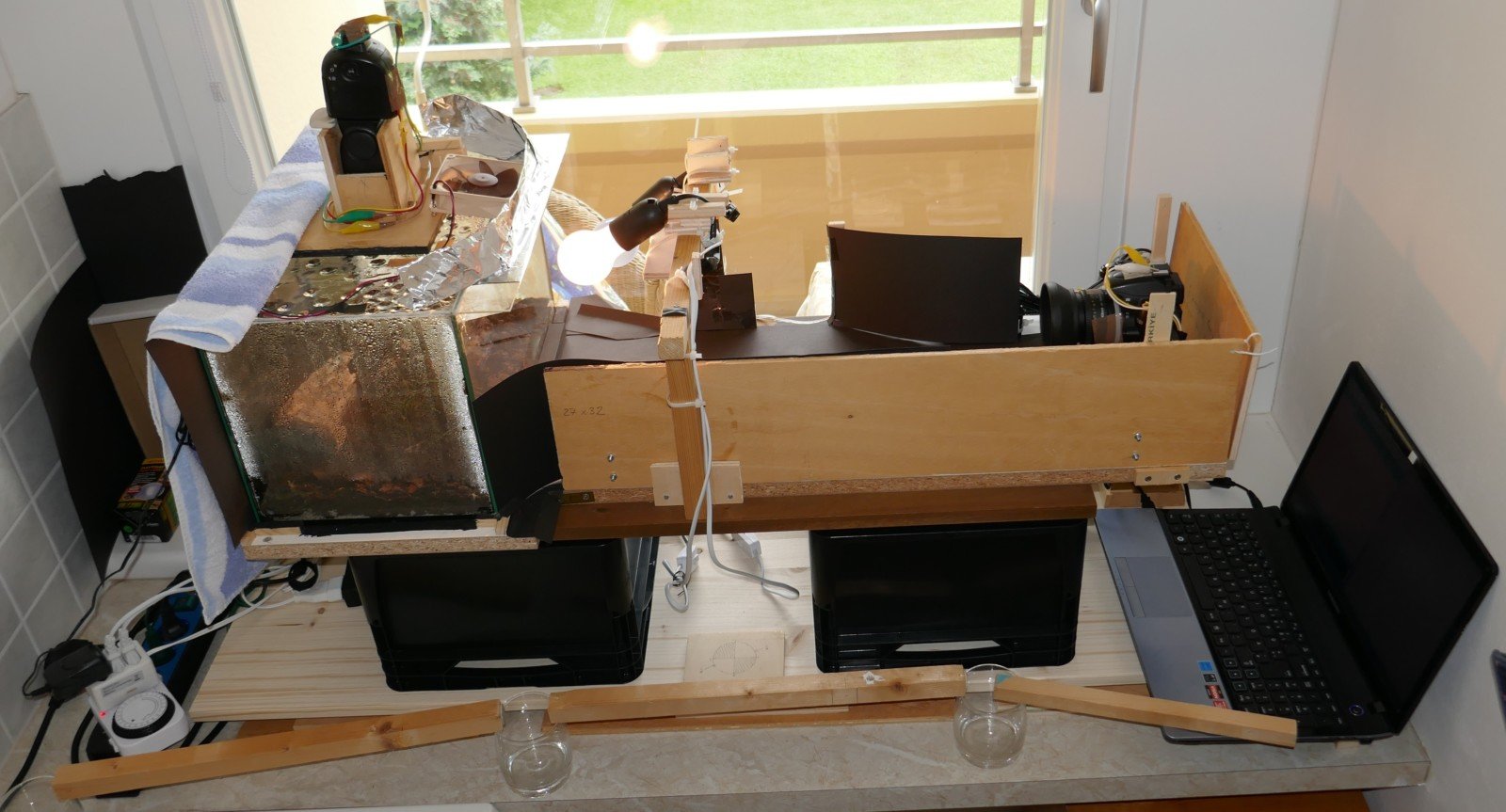 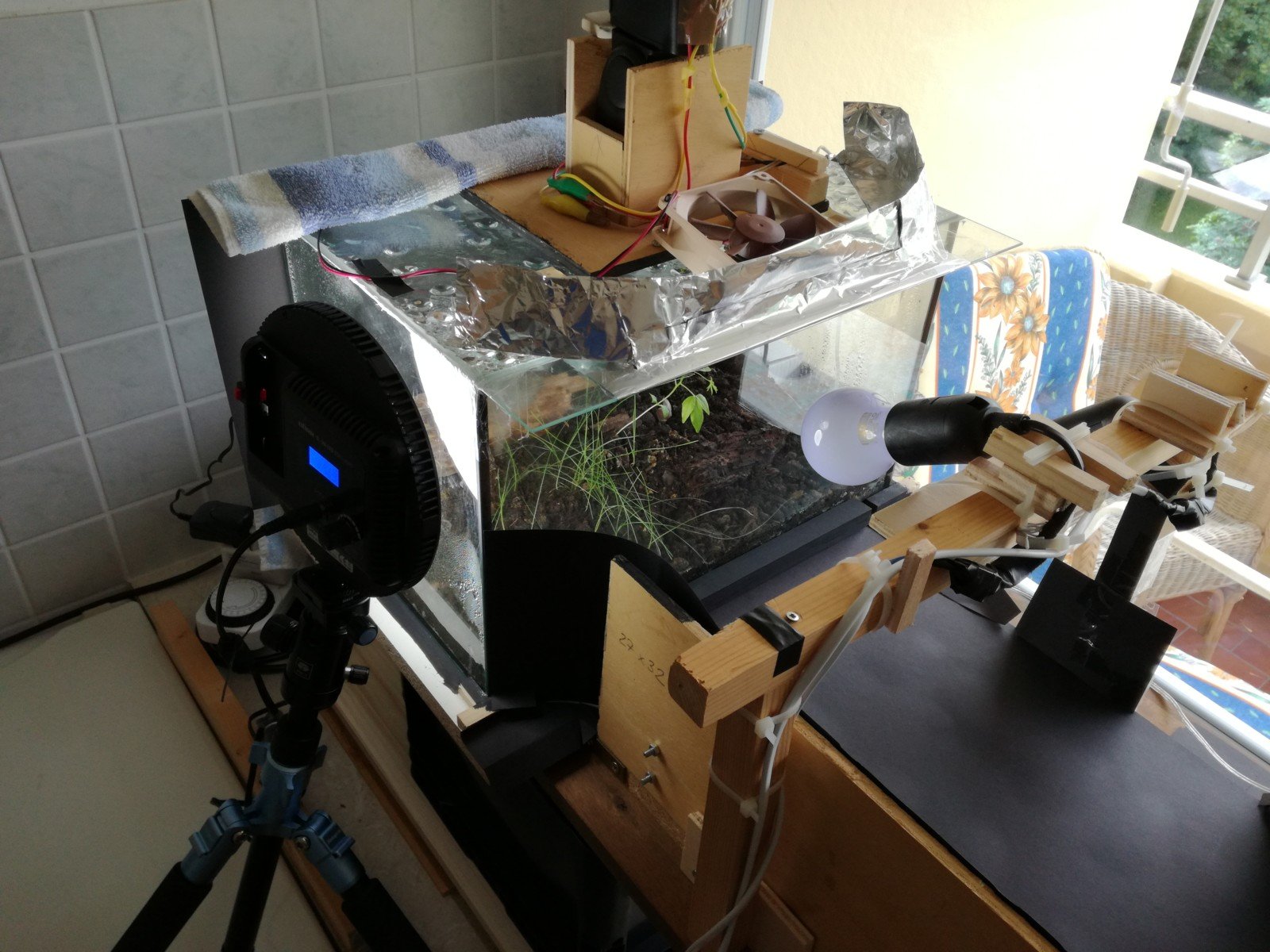 Because the evaporated water could not escape from the terrarium, a layer of haze was building up on the glass, which softened the image until, at some point, one couldn’t see anything anymore.

Using a hairdryer to warm the glass from the outside all the time proved to not be efficient and also quite disturbing… so I installed a heatlamp (like the one you would on a terrarium with reptiles inside) to warm up the glass, which turned on and off every 15 minutes in the time with the photos so that it was never on when a photo was taken.

Unfortunately, the glass on top also warmed up, and no water droplets were gathering or falling down any more. So I had to install a small fan from an old PC to cool the top glass, which finally worked to keep the ecosystem in balance. 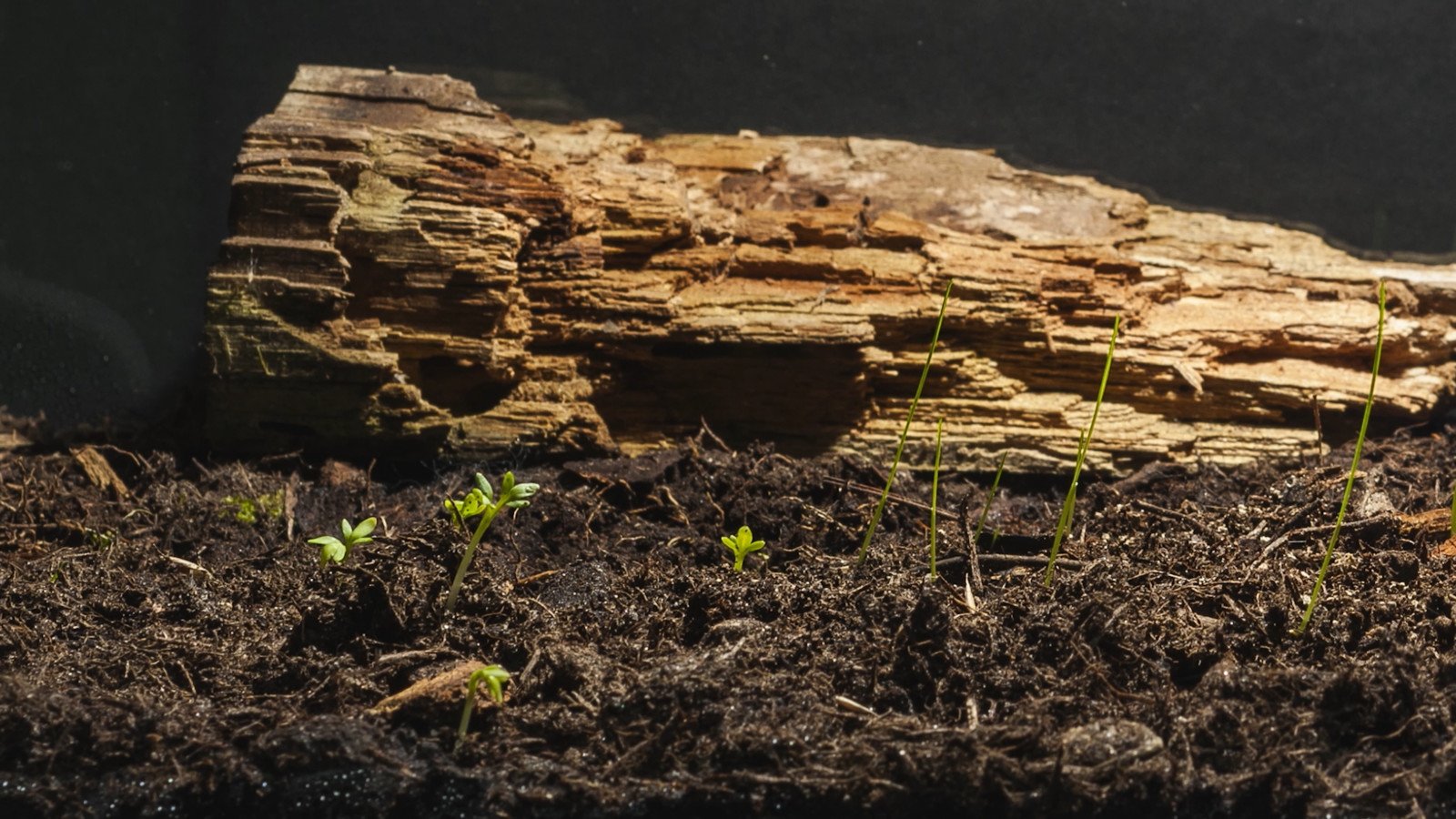 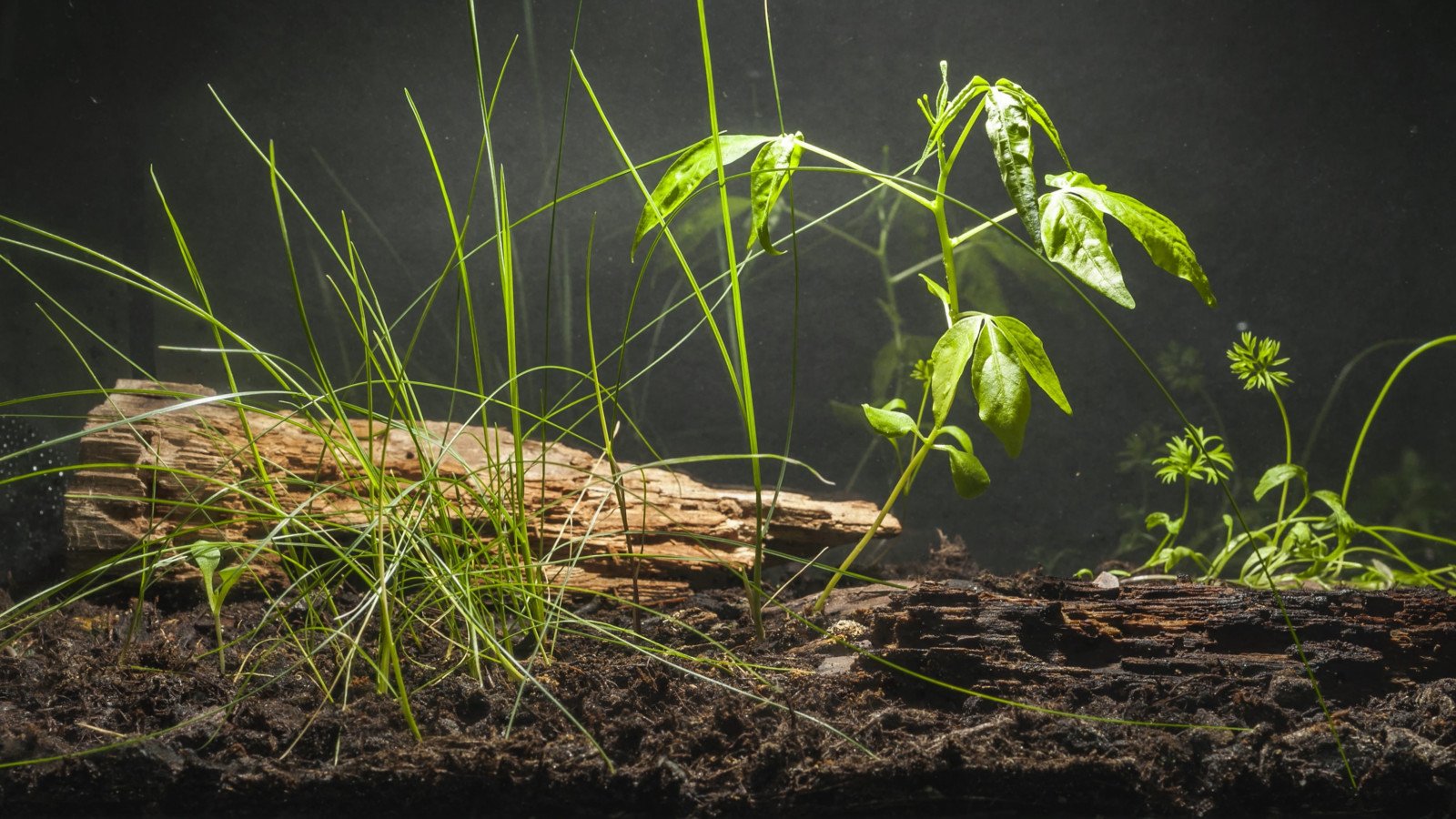 With this setup, the plants grew for a few months. The cress was the first to come out, grass followed and then various other small plants as you can see in the video.

When they started to dry up after about 8 months, I broke open the top glass to have them dry out further. Then in the end, I poured Ethanol inside and set the plants on fire, to only leave back “burnt soil.” 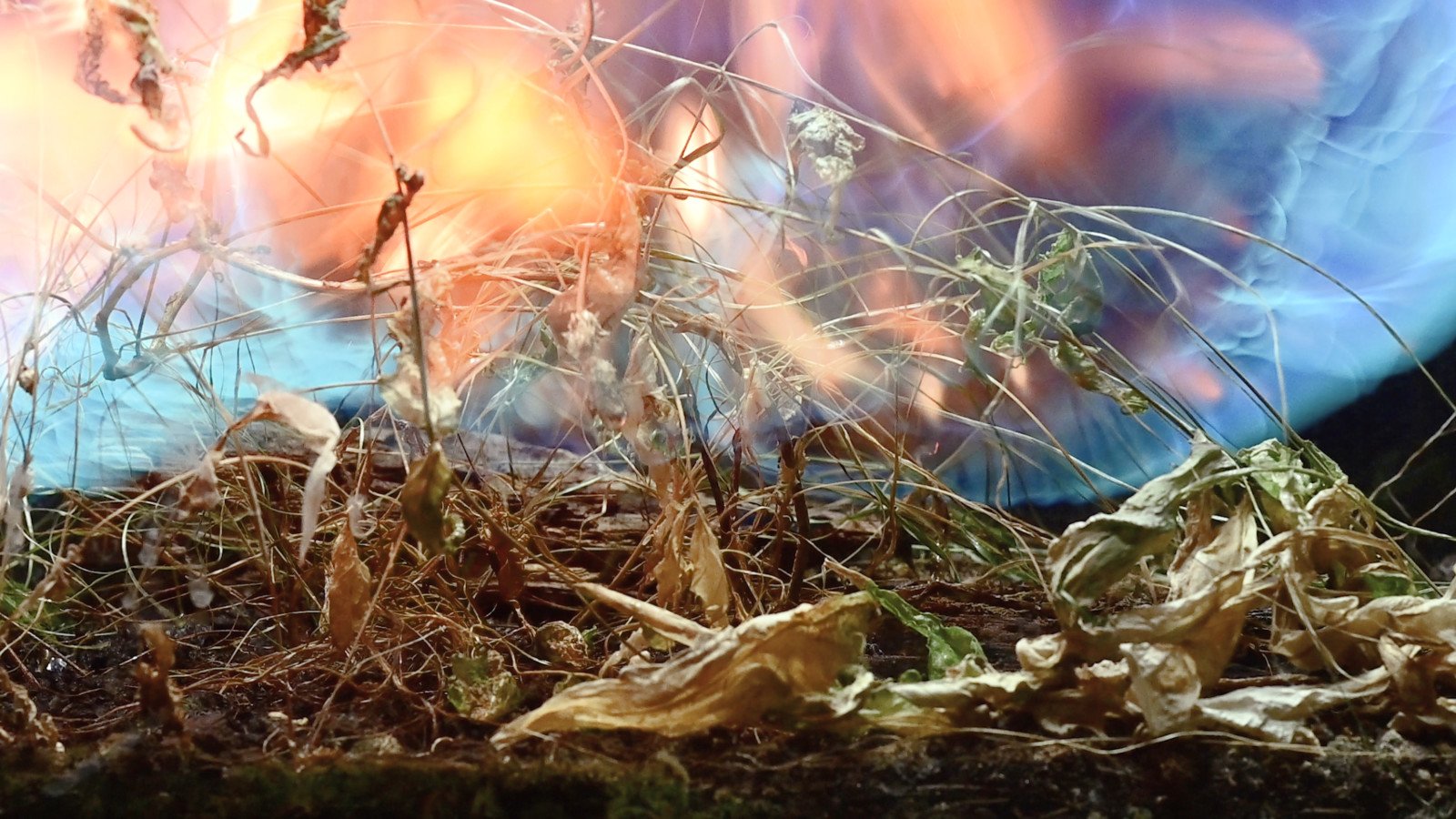 I changed the SD-card about once a month and backed the material up regularly. In those 10 months, about 200GB of images were gathered.

For the post-production step, I used the ever-trusty LRTimelapse by Gunther Wegner, which I used to import the material in batches of about 2,000 images, calculate a preview, and then delete the frames that had too much haze, no flash, or the heatlamps in them.

I ended up using exactly 14,275 frames for the video. Taking two pictures every hour for just over 10 months would produce a little more, but between the ones I lost or had to delete I ended up using a total of about 96% of the pictures I captured. In the graph above, you can see the phases where I lost or had to delete pictures. For example, a lightning strike in August or problems with the lamps in December and February.

After rendering the timelapse video, I imported the sequence into Adobe Premiere and sped it up to fit to around 5 minutes. I also changed the play speed a bit, to lengthen the more interesting parts where plants come out of the soil and speed up the latter parts where all of the action was dying down.

Although most of this project worked out quite well, there were a few obstacles that I had to sort out:

Not enough water in the terrarium.
After the first week, everything that had grown till then, fell down and dried up. So I drilled a small hole in a top corner and via an injection syringe added some water.

All in all, even with countless hours of trying, failing and trying again until it worked, and many obstacles that popped up along the way, this was still a fun and interesting project.

It ended up being a great learning experience on many subjects, ranging from photography to electrical, to some kind of gardening. And should I ever get an idea for a similar project, I bet I’d do it again.

About the author: Philipp Rameder is an IT-student from Austria who enjoys photography when he’s not busy studying. His main focus is portrait photography, landscape, and timelapse, but he loves to try out new concepts and just be creative with what comes to his mind.You can find more of his work on his website, or by following him on Instagram, Facebook, and YouTube.