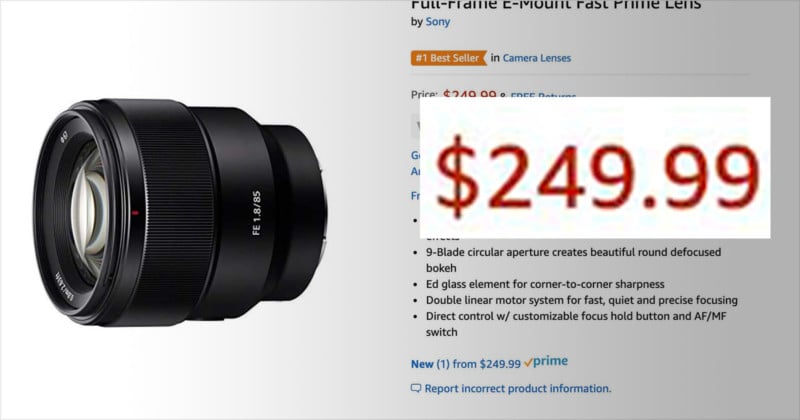 Amazon sparked a frenzy on Prime Day back in July after it accidentally listed a wide range of cameras and lenses — some worth over $13,000 apiece — for $94.48 each. While we’ve heard of strange pricing errors before, what’s crazy is that Amazon honored the orders and buyers actually received tens of thousands of gear for hundreds of dollars. But it seems Amazon’s generosity (or oversight) was limited to its Prime Day festivities…

Sony Addict reports that some Sony photographers were delighted to find the $550 Sony FE 85mm f/1.8 listed for just $250, or about 55% off. Many photographers undoubtedly jumped on this deal as word spread, and with high hopes given what transpired just a couple of months ago.

But those photographers hopes have since been dashed — Amazon has apparently canceled all the orders while notifying buyers that it was an “incorrectly posted price.” Here’s the email customers are receiving, as shared by Sony Addict:

We recently discovered that an error caused the following item(s) to be displayed at an incorrect price:

In this case, we’re unable to offer this item for the incorrectly posted price. Therefore, we’ve canceled your order for this item. We’re sorry about this. At any given time, despite our best efforts, a small number of the millions of items on our site may be mispriced.

To make up for any inconvenience, we’re adding a $20 Amazon.com Gift Card to your account. This balance will automatically apply to your next order at Amazon.com.

We hope to see you again soon.

It’s strange that Amazon honored a pricing glitch that potentially lost the company many thousands of dollars for each customer while quickly canceling a less publicized one in which the difference was “only” $300 per lens (though the $20 credit is better than nothing). But Amazon did generate an estimated $7+ billion in sales over the two-day Prime Day event, so the pricing losses (while unusually big) were just a drop in the bucket of Amazon’s profits that day.