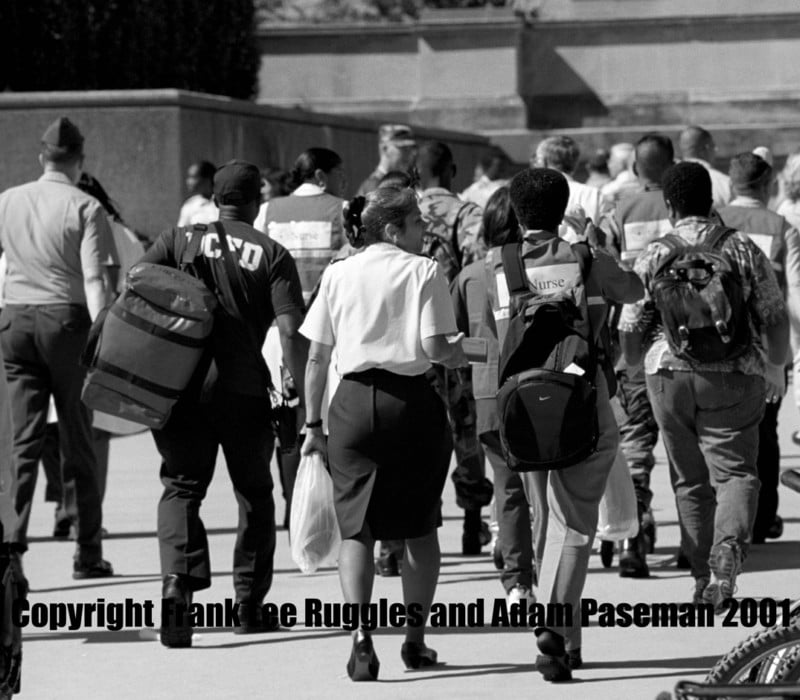 On an otherwise quiet and beautiful September morning, my business partner Adam Paseman and I found ourselves speeding down Route 1 in Virginia to take some photos for the Associated Press of the White House which had mistakenly been reported was on fire.

The AP had phoned our photo studio in Falls Church and asked if we could get there quickly since our shop was close to the District and apparently no other photographers were available for dispatch on such short notice.

The man told us that route 66 was completely stopped for some reason and some of his regular photographers were stuck sitting in traffic. He offered us “1,000 bucks for every shot that makes it into the paper”, so we quickly took an alternate route into to the District.

As we rounded the corner just past Crystal City, we saw an explosive plume of black smoke rising from the Pentagon. It shot into the sky like those old movies of nuclear tests in the desert. It was startling and scary but it felt like something that ought to be recorded on film, so we pulled over on the side of the road next to the Pentagon, grabbed our camera bags and started running towards the entrance of the giant building, snapping images along the way.

We approached the Pentagon entrance as crowds people were streaming out the doors, some at a full run, some barely walking, some covered with blood. We didn’t yet know that a plane had just slammed into the side of their workplace a just a few moments earlier, but we could tell the situation was urgent and people might need our help… this was a mass casualty event.

Amazingly, none of the employees evacuating the building were screaming or panicked. They were on alert, for sure, but they were calm. We were surprised to see that those who were uninjured did not evacuate the area, rather, they either tended to the wounded or met up with other workers who were handing out first aid packs and stretchers. Then, just as quickly as they ran out, the able-bodied civilian and military workers all marched back into the burning building.

After a quick discussion between us, Adam and I decided to join one of the groups heading into the building. We didn’t have permission and we weren’t asked, but we realized when we saw the emergency teams carrying stretchers that a few extra strong backs might come in handy. We hoped we could help, so we just went into the Pentagon to do whatever we could.

We stowed our camera gear back over our shoulders and marched in with the teams, not knowing what to expect, not knowing if we could even be helpful.

The desire to do something was overwhelming.

Inside, the smoke from the spreading fire was incredible and the scene was a little more chaotic. The windows on the doors had been blasted out even though they were two sides of the Pentagon away from the point of impact. Even though we were all now wearing dust masks (which were handed to us at the door), we found breathing nearly as difficult as seeing.

An Air Force Full-Bird Colonel stopped us briefly; noticing our camera gear. He said, “Guys, this isn’t a press event” as if he was going to turn us away. I looked at him and said… “No, this is history.”

“Good point,” he answered and waved us ahead.

I hadn’t even thought of taking photos at that moment, I just wanted to get to the people who needed to be carried out. The lights flickered and we walked around E-ring towards the impact site. Windows had been blown out throughout the entire building, lights hung from the ceiling… there were glass and debris everywhere. We moved slowly but deliberately toward the impact site. The scene got worse with every step. My heart was racing, but Adam seemed calm so I stayed calm, too.

Down the corridor ahead, a door flew open and three men came running out. The lead man, a US Marine Corps Major, shouted: “Get the f**k out of the building, another plane is heading right at us!!” I think I heard him say they had picked it up on radar or something, I couldn’t quite understand what he was saying, but the note of urgency was unmistakable. Where once our group of ten people was shuffling together towards the fire, we were now flat-out running in the other direction, back towards the exit. My mind immediately thought of my wife, Lisa. “If I get hurt, she’ll KILL me,” I said to myself.

Not knowing the quickest way out, we simply ran towards the light hoping somehow that we could outrun a jumbo jet. The reality of the situation started to sink in for the first time… “This is an attack,” I thought.

I looked to my right; Adam had pulled his camera out and was snapping photos as he ran. He looked determined to document what he was witnessing during what might be the last moments of his life. As we broke through the doorway, my cell phone rang. I don’t know why, but I answered it even though I was at a full-speed sprint.

I lost the connection. My stomach sank… I feared those might be the last words I may ever say to my wife. Why didn’t I think to say, “I love you”?

We spent the rest of the day shooting 4 rolls of film the evacuation at the Pentagon, cut off from all communication and unaware of what was happening a few states away. Thanks to the brave passengers of United 93, I got to see the look of anger and relief on my wife’s face that night as I pulled into the driveway. She didn’t know until that minute if I was alive or not.

That plane on the radar never came to kill me and my friend. Would it have hit the Pentagon? Nobody will ever know, because when we needed them most, regular Americans became heroes. Those people saved lives, possibly mine.

I think that day in Virginia as well as in New York, and in the sky over Pennsylvania, in every city across the USA, we ceased being Republicans, Democrats, poor, rich, black, white, young, or old. We were simply Countrymen. As the situation worsened for us, our American instincts kicked in and we did what came naturally; We automatically went into recovery mode.

Everyone aided someone else that day, whether it be the heroic act of taking back a highjacked airliner or offering a kind word of reassurance to a stranger. For a short while, we were all lucky enough to witness America at it’s absolute best in the face of it’s worst circumstance.

I will never forget the NYPD and NYFD heroes who rushed into a doomed situation in the hopes that they could save at least one more life. I will never forget Todd Beamer, Tom Burnett, Cee Cee Williams, Sandra Bradshaw, and the rest of the United 93 passengers who spared the rest of us from the same fate delivered by the other three planes that day.

I will never forget.

I will never forget.

Damn it, I will never forget any of this.

Here are the photos:

About the author: Frank Lee Ruggles is a photographer based in Washington, D.C. The opinions expressed in this article are solely those of the author. Ruggles is a former National Parks Eminent Photographer, Army paratrooper, Pentax brand ambassador, National Park Trust Artist Ambassador, and Nat Park Geek Photo Ambassador. You can find more of his work on his website and Twitter. This article was also published here.