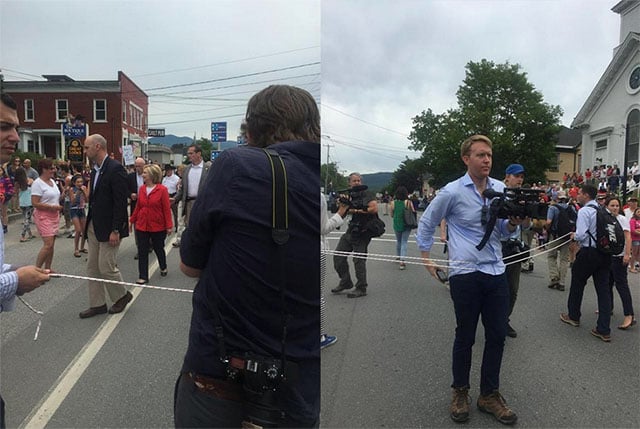 A new idea by Hillary Clinton is going viral on the Web, and this one has nothing to do with government policies. While walking through the streets during the Independence Day parade in Gorham, New Hampshire, yesterday, Clinton’s aides used ropes to contain and control photographers and others members of the press corps. Photos of the unusual “wrangling” quickly went viral online after being shared by reporters.

USA Today calls this moving parade rope line a new “Clinton innovation“. New York Times correspondent Maggie Haberman was on the scene, and says that the press was “being pulled along with a rope” as Clinton strolled.

CNN reports that “campaign aides said they brought the rope out because they feared the press scrum of around a dozen reporters and photojournalists would obstruct the view of New Hampshire voters attending the parade.”

“The rope was held by two of Clinton’s advance staffers, who at times walked ahead of reporters, seemingly pulling them along the parade route.”

Spectacle of Clinton as candidate – press being pulled along with a rope, Benghazi protester screams "carpetbagger" pic.twitter.com/1aeopWiLjv

Clinton reporters being roped down a parade route via @JaxAlemany snaps pic.twitter.com/mpNKofK7r7

So many people trying to get close to Hillary her aides are using a rope to keep press at distance pic.twitter.com/PkIl0Pez98

Clinton advance aides create a rope line for the press, moving with the candidate pic.twitter.com/9S7CpVt7x4

In response to criticism of the way journalists were being herded around, the Clinton campaign said that the rope actually improved access for the journalists.

“While the GOP might want to spin a good yarn on this, let’s not get tied up in knots,” a spokesperson tells CNN. “We wanted to accommodate the press, allow (Clinton) greet voters (sic.) And allow the press to be right there in the parade with her, as opposed to preset locations.”

Standing Up for the Concert Photographer… By Standing on Their Neck