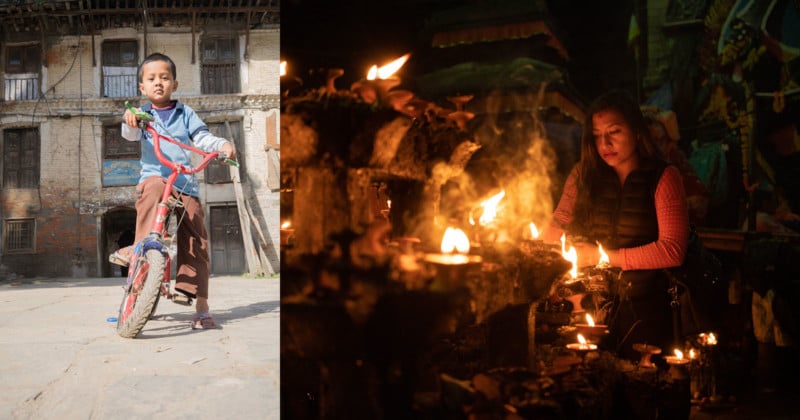 On the way out of the Terai Plain in Nepal, I stopped in the town of Janakpur. The town has a beautiful temple and I was all geared up to shoot some nice stuff. But as I wandered around, I could not “see” any images despite a religious ceremony that was taking place at the time of my visit.

This visit to Janakpur came after back-to-back assignments in a sad location in Bangladesh (the biggest brothel in the world) and a poor village in Nepal for Save the Children. Daily temperature in both places was ranging between 36-40°C (96.8-104°F) with sky-high humidity. The result was that I lost my eye for images and the appetite to take them.

I got myself a cold Lassi, the best I ever had, took a flight back to Kathmandu and, after serving my addiction for coffee, decided to give myself a challenge.

First, I would have two days without a camera of any sort, not even a mobile phone. I was going to settle down in a coffee shop to retox and defrag.
Second, I would do one day of photography with one camera and one lens. No tripod, no flash.

“Why hard?” you may ask yourself. I am not used to a 35m lens and I do not particularly like that focal length.

So after a couple of days of heavy coffee drinking, I had a driver waiting for me at a ridiculous hour in the morning to start shooting with the plan to finish when there are no people left on the streets.

I know Kathmandu relatively well so I knew what I wanted when it came to locations.

At the same time, I did not want to replicate images I had shot in my previous visits shooting for both Sony and Nikon. That would be just like coloring-in rather than drawing.

My aim was to avoid the tourist traps and catch as much of the local life and activity as I could.

Fortunately, Nepal is a nation of festivals, so it happened that a minor Hindu festival was on the day that I was shooting. I’ll be the first to admit that my understanding of the ins and outs of both Hindu and Buddhist religions is limited at the best of time, so my photo taking and selection of the devotional images are based on visual merits only.

To start with, it was hard to set my mind to the focal length of 35m. I use 24m as my lens of choice for this kind of photography and 35m is quite a bit narrower. In real terms, it means that when you look at a scene and think you are standing in the right place for the perfect framing, when you put your camera to your eye, you find that it is much narrower view than expected.

Sometimes it’s easy to fix by moving a few steps backward. But at other times, when you anticipate a moment and bring the camera to the eye just when shooting and for confirmation of composition, that narrower focal length can be a real pain in the backside.

My friend in Kathmandu told me about a particular candle ceremony, focussed on fertility, that women participate in that was to occur on the morning I started the shoot. So I started there.

From there we drove to Boudhanath, a mostly Tibetan temple with Tibetan monasteries surrounding the main stupa. The sun was just coming up and it gave an opportunity to get some faces with low sunrise light.

After the sun was well up we drove to Buktapure. The town is famous for its traditionally made pottery. This small satellite town’s monuments were badly damaged in the earthquake of 2015. because of this, there are fewer tourists and more traditional craftwork. This is reflected in the images I took.

As the sun climbed higher in the sky, I returned to the old streets of Kathmandu city and stayed there for the rest of the day.

After 11pm, If I was going to get any kind of people photography done it was going to have to be a selfie. The streets were empty. So I stopped and enjoyed a sweet tea with a local sadhu (holy man). It was a very good way to end a very busy day.

In terms of techniques, I used everything in the book, from anticipating a moment to asking. It was a great opportunity to sit with people and chat while sneaking a frame here and there. I enjoy socializing with people so for me the later part, the chat, was the fun part

And for gear, I shot with the Sony a7R II and the Sony 35mm f/2.8 ZA. I have respect for this combination, it works on many levels as it is very light and very small. This combination allowed me to wander about incognito, gear-wise. Taking advantage of those unguarded moments. It was also easy to carry for many hours without getting tired.

Did this exercise fix my “photographer’s block” and put me on the right path to happiness?

Yes. I remembered that I really enjoyed photography just for the sake of creating images, without any overhanging need to satisfy a brief from a client. Taking a break and setting a new challenge had re-calibrated my photography mojo. I was back in the game.

Will I do it again? Absolutely. I am planning a new challenge in an area that is not my usual provenance, or more to the point, an area in which I have no talent at all: a landscape project. Will see how it goes…

About the author: Giora Dan is a New Zealand based commercial and documentary photographer and educator. The opinions expressed in this article are solely those of the author. Dan has produced images for Panasonic Japan, Sony Asia Pacific, and Nikon Asia as well as geographic magazines and NGOs. More of his work available on his website and Instagram.