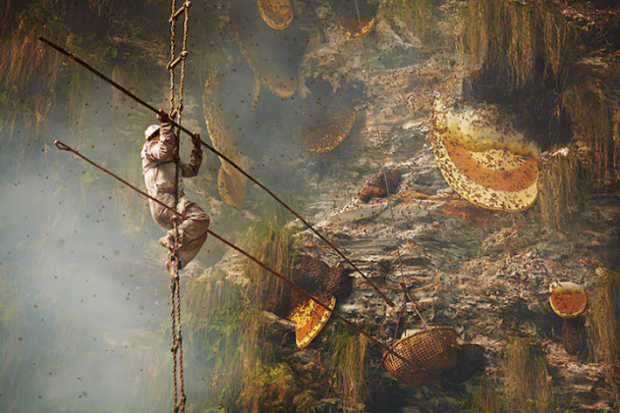 This time around he’s traveled to the foot of the Himalayas in Nepal to document the Gurung tribe’s bi-annual tradition of gathering honey.

While Newey and the hunters trek to one of the many honey hunting locations, the group collects foliage to be used in fires to smoke out the world’s largest honeybees from their hives. Once the bees are driven off and sedated, the dozen or so hunters get to work.

The most difficult job in the group is said to be that of the “cutter”. Wearing a beige bee suit in the photograph above, which was given to him by tourists, the 58-year old cutter climbs up a 50-meter rope ladder that’s been secured at the top and bottom of the cliff.

From the rope, he uses two bamboo sticks, known as tangos, to gather the honey. With one sharp tango, he slices at the exposed honeycomb while using the other tango, with a wicker basket attached to the end, to catch the falling honeycomb. What he doesn’t catch falls to the base of the cliff, leaving the accompanying children rushing to the splattering globs for a sugary treat.

Here’s a look at a selection of photos from the series:

This tradition of hunting honey is a dying one, as are many of the other traditions Newey has immortalized. Between the younger generations heading into the cities in hopes of making a living off the tourism market, and the aging of the elder, experienced hunters, the knowledge just isn’t getting passed down as it has in the past.

To add to that, the tourism industry is contributing to the demise of this tradition. For upwards of $1,000, tourists can go on guided honey hunting treks, which leads to excessive harvesting — far more than the twice a year usually done, leaving not nearly enough time for the bees to properly produce the needed amount of honey.

Where it was common to previously pull in 200 litres of honey in the past, this particular trip only amassed 80 litres. And in addition to the dwindling supply of traditional honey, “red honey” — which is harvested in the spring and often shipped east to China, Korea and Japan for medicinal purposes — is in decline as well.

Newey managed to capture just one of these incredible journeys, but in doing so he has captured an extremely intimate look of both a culture and tradition that seems to be dwindling along with the supply of honey.

Noting the reasoning behind these dying treks, Newey is fully aware of the paradox of his presence. Speaking about the people who have asked him how they can see this event for themselves, Newey tells the NY Times Lens Blog that, “it’s a double-edged sword. I just hope those same people don’t become part of the problem.”

Image credits: Photographs by Andrew Newey and used with permission

Superman View: Creative GoPro Video Lets You Fly Around as the Man of Steel