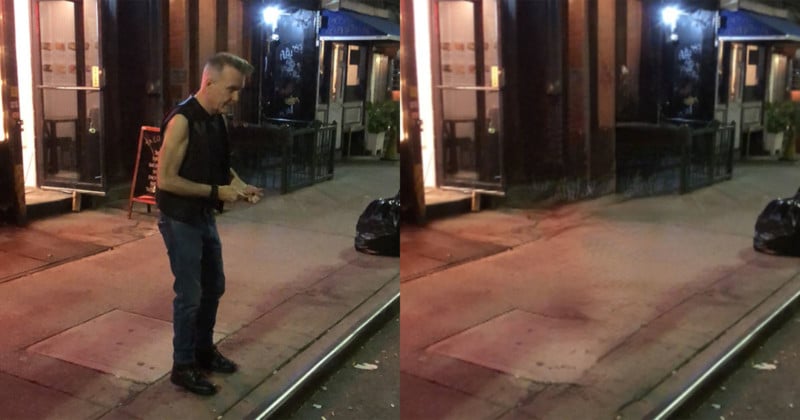 Want a fast and easy way to shoot photos in without pesky humans ruining the scene? There’s a new iOS app called Bye Bye Camera that automatically removes humans from every photo you snap.

Bye Bye Camera is an art project by artist Damjanski and the collective Do Something Good.

“The app takes out the vanity of any selfie and also the person,” Damjanski tells Artnome. “I consider Bye Bye Camera an app for the post-human era. It’s a gentle nod to a future where complex programs replace human labor and some would argue the human race.”

The app uses an real-time object detection system called YOLO to identify all the humans in the scene. It then does “inpainting,” which is what Photoshop’s Content-Aware Fill does, to fill in those human areas with surrounding pixel details.

The results are a bit crude — important parts of the scene may be removed along with the people and the filled-in areas may stand out in the resulting photos — but it’s a quick and dirty way to get the job done.

Because the app only targets humans, it’ll leave other moving things and creatures (such as dogs) intact.

Back in 2015, Adobe showed off a similar technology called “Monument Mode” that’s able to wipe tourists from a scene in real-time as you’re composing your shot. That tech has yet to arrive in the form of a camera app, though.

If you’d like to get started with Bye Bye Camera, you can buy it for $3 over in the iOS App Store.

Gigi Hadid: I Can Use a Photographer’s Photo Because I Smiled