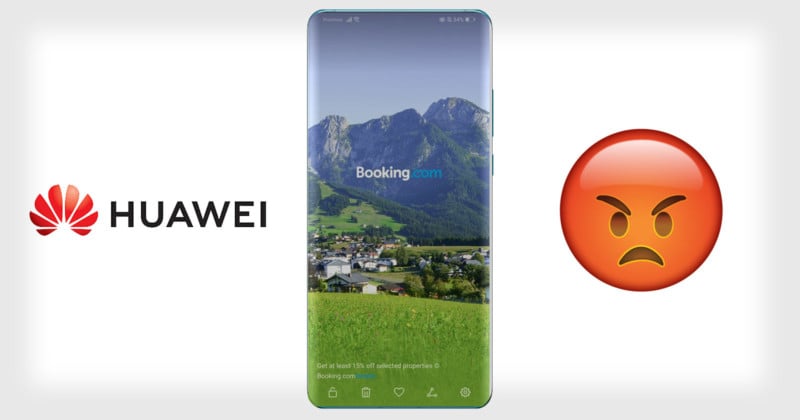 Huawei has gotten quite a bit of bad press in recent days, and its latest PR nightmare is a strange one. Users around the world started complaining after advertisements began quietly showing up on their lockscreens as default photos.

While other smartphones may come with beautiful landscape photos as default wallpapers, users of Huawei’s smartphones, including the new P30 Pro, are reporting default lockscreen photos with the logo for Booking.com obnoxiously displayed across them accompanied by an offer for 15% off for booking a vacation stay.

It’s not exactly the type of photo smartphone users like to see when checking the time, catching up on notifications, or unlocking their devices, so complaints have begun flooding social media from unhappy customers.

#Huawei has turned the random landscape backgrounds on the lock screen into ads. Wtf fuck this pic.twitter.com/6dAUeu17Jf

Ah hear… @Huawei why am I now being served ads on my lock screen? Stop it! Moreover @bookingcom what idiot in marketing thought this was ok? #ads #DigitalMarketing #Huawei #measure pic.twitter.com/Ta1lslMwsP

After the outcry from users on social media, Huawei announced that it had investigated the issue and removed the wallpapers from its servers. But the wallpaper may already be downloaded to your device, and if that’s the case, you’ll need to manually get rid of those photos by swiping up and tapping the cross button to remove the image.

(via 9to5Google via Engadget)

The Winning Photos of the 2019 Nat Geo Travel Photo Contest

Nikon to Unveil a Mid-Level Mirrorless That May Be Sub-$1,000: Report