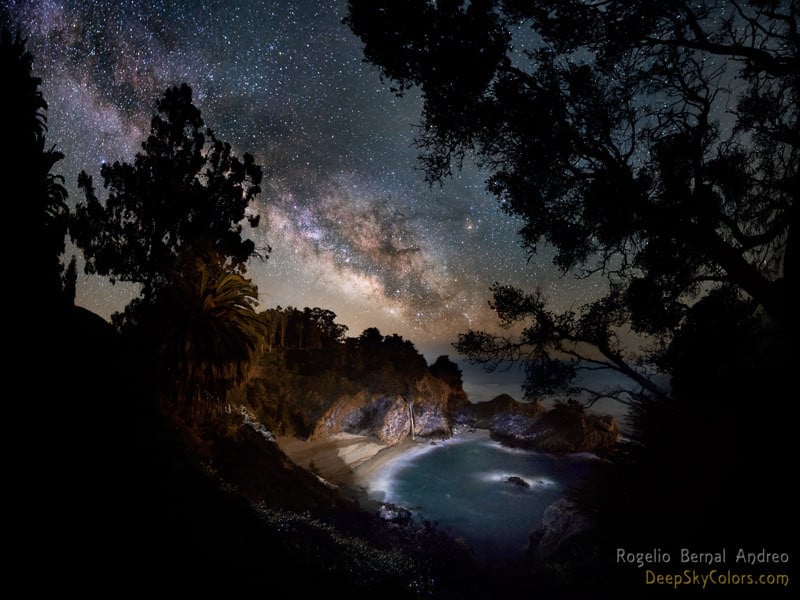 McWay Falls has been a tourist destination for longer than many of us even heard of the place, but it wasn’t until 2012 that photographer Steven Christenson really “discovered” the potential of the site at night. Nestled in the rugged and gorgeous part of the California coast better known as Big Sur, McWay Falls enjoys extremely dark skies.

Of course, in 2012 nightscapes weren’t near as popular as they are today, meaning those of us who were already doing it had a lot to discover. During the spring of 2012, Steven brought a few people there, and although Steven didn’t try to keep the place to himself, McWay Falls remained off everyone’s radar as a nightscape destination.

Fast-forward exactly one year, to 2013. I was on my way out of Death Valley after having spent a few nights shooting there, heading to the coast, when Steven texted me out of the blue asking my whereabouts. After I told him I was planning on spending the night at the coast, that’s when he texted me the word “McWay”, suggesting I stop there to check it out.

Not knowing what McWay Falls was, I entered it on my GPS and there I went. Again, I had never seen a picture of it, been there, heard of it, nothing… yet I trusted Steven’s suggestion and I surely was glad I did!

When I arrived it was already dark, but visiting a place for the first time at night is something I’m used to, despite the fact that it’s much smarter to scout new places in daylight. I also had to find the trail (if you’ve been there, you know there’s nothing letting you know you’re there or where to go), not to mention I was very tired after driving here all the way from Death Valley, but somehow I managed to find the way, and as I stepped on the little bridge and looked towards the cove, my jaw dropped.

Astonished as I was at the gorgeous view I had in front of me, my photographer’s habits kicked in fast. The moon was about to set, still giving a bit of light to the landscape. Rather than going for the open view from the little bridge, I favored the view at the end of the trail, with the trees hugging the scene (this later became a classic in most of my shots of the waterfall). I took some shots with my Canon 5D Mark II and Sigma 20mm f/1.8 lens, I then stayed there for a while — who wouldn’t! — after which I went back to the car, then headed home.

The image I produced was noisy and without a lot of detail, but the dreamy and almost out of a fairy tale landscape was as enchanting as it was surreal. I named it “Untouchable Beauty” because accessing the cove would be trespassing — no one is allowed down at the beach.

Back then I wasn’t too big on using social media, but next thing you knew, on May 7, 2013, the image featured on NASA’s APOD, which by itself brought the view to over 1 million pairs of eyes. 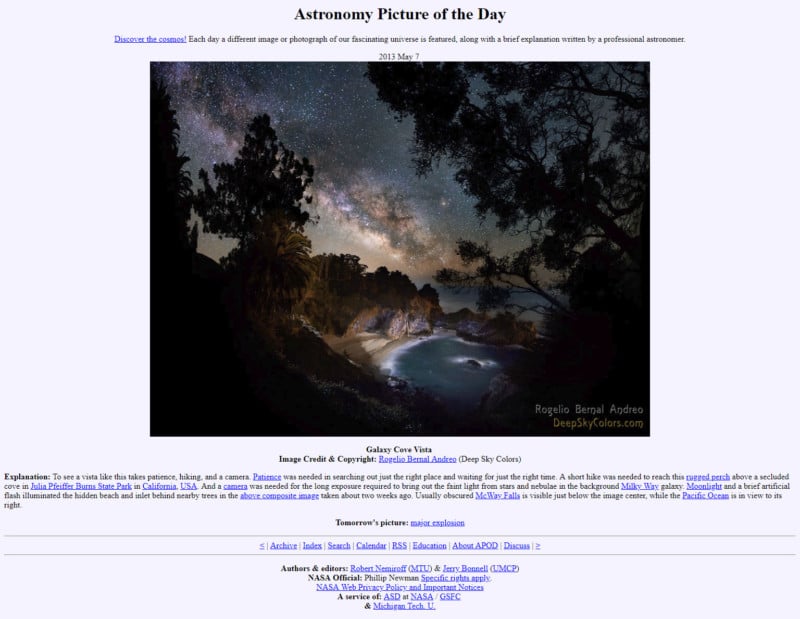 And then the McWay Falls nightscape craze started.

Within a year, a shot of McWay Falls with the Milky Way became an item in the bucket list for many photographers. Perhaps the site was not quite yet a world-famous nightscape destination, but it was getting there. Then I did something I’ve seen myself doing time and time again: not satisfied with my image nor what I had seen from others, I decided to capture McWay Falls not necessarily better, artistically speaking, but in a much cleaner way, and “Still Untouchable” was born, an image captured with a telephoto lens, plus stacking.

The image, coincidentally, ended up also featured as NASA’s APOD on June 29, 2014. 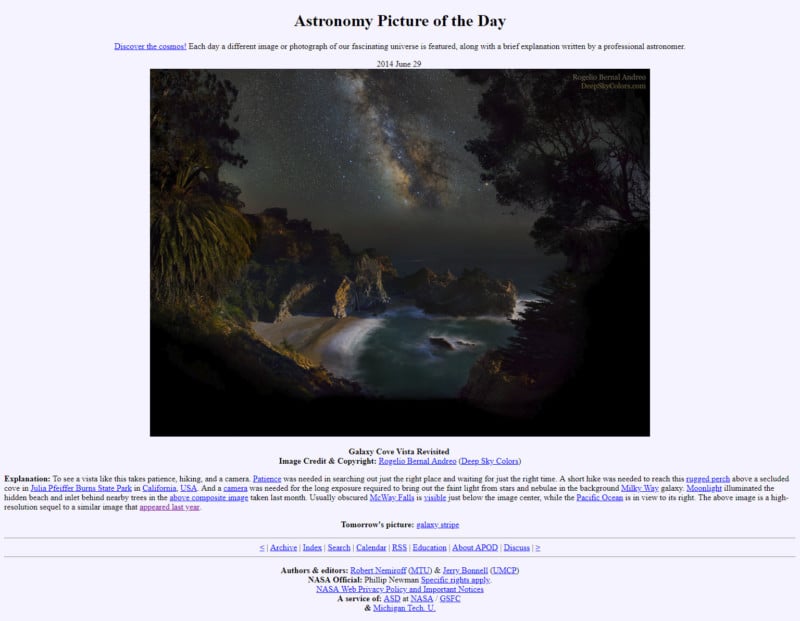 After this second “distribution”, pictures of McWay Falls and the Milky Way started to pop up everywhere. I started hearing about people who learned about the place because they saw someone else’s image, who had seen a picture from someone else, who had seen mine on the APOD, and so on.

I have visited McWay Falls dozens of times since. This, of course, has made my collection of McWay Falls images to be pretty dense but again, despite its now world-famous status, McWay Falls had become a place I would go just to muse, to hang out doing what I love, not particularly to capture yet one more photo — although of course, I’ve never stopped photographing it on every visit!

Today, however, for most people, another shot of McWay Falls and the Milky Way tells almost nothing to anyone except maybe the author. Yes. McWay Falls has been shot to death.

It’s worth mentioning, however, that despite all this, the place has not ever been vandalized (to my knowledge). The worst I know is about people climbing down, which is illegal and very dangerous, but which hasn’t inflicted any appreciable damage to the area…

I’m not saying McWay Falls is immune to vandals or crowds. Nothing is. But the popularity of the place has not affected the site in any way for these six years, with the area pretty much accessible overnight all the time. In fact, Mother Nature has taken care of that in a much more destructive way, and the trail is closed at the moment and nearly gone in some areas, due to storms from the 2018-2019 winter.

If this had been a lesser-known landmark, Steven or I could have claimed “secrecy” and argue that we’re preserving the place from vandalism or crazy crowds, and while I don’t particularly enjoy visiting a place at night and finding 10 or more folks where a few years ago I’d be all by myself, and I also don’t get thrills from seeing the same shot a thousand times… those reasons are about me!

Everyone who’s visited McWay Falls at night has experienced it, enjoyed it and hopefully loved it. They took their own interpretation of it, or whatever is they could get. The only sad part is about those who would visit a place solely for the picture, completely missing out on the experience, and yes, there’s a lot of that today.

As for the vandals, it’s a hard fact of life that some people take joy in cowardly destroying what nature gives us. Crowds are the scary part, and they can ruin everything about a place if it gets crazy enough. In the time being, after the harsh winter that destroyed part of the trail and the bridge, McWay Falls is being protected by the same forces that built it in the first place for us to enjoy: Mother Nature.

Editor’s update: This article was originally published on PetaPixel with the title “How I Helped Put McWay Falls on the Map for Nightscape Photos.” We’ve since changed it to “Six Years of McWay Falls,” the author’s original title.

About the author: Rogelio Bernal Andreo (aka RBA) is an award winner astrophotographer living in California. In 2007, he started exploring astrophotography as a hobby and developed a personal style defined by deep wide field images that led to international recognition and a meaningful influence on the discipline. The opinions expressed in this article are solely those of the author. To see more of his work, visit his website or follow him on Instagram and Facebook. This post was also published here.