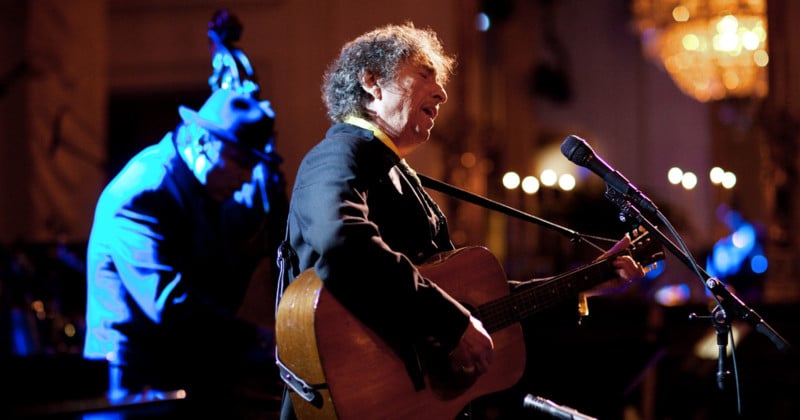 Bob Dylan is known for being a man of few (speaking) words on stage, but he took to the mic during a show this week to call out fans for breaking his well-known “no photos” rule.

While performing in Vienna, Austria, the 77-year-old singer paused in the middle of a song to remind those in attendance to put their cameras away. When he stepped backward away from the mic, Dylan accidentally tripped over a stage monitor and stumbled, nearly taking a tumble.

After regaining his footing, Dylan strode back to the mic and said, “Take pictures or don’t take pictures. We can either play or we can pose. Okay?” He and his bandmates then stopped to pose for several moments before resuming with the show.

Here’s a video of the whole incident:

“The incident marked the first time that Dylan had spoken to the crowd in some time,” Rolling Stone writes. “Audiences used to only hear his speaking voice when he introduced the band, but he stopped doing even that about two years ago.

“Before most shows, audiences are informed that photographs are not allowed. At New York’s Beacon Theater last year, ushers roamed the aisles with flashlights and shined them directly at anyone using a phone. Repeat offenders were threatened with ejection.”

“I have never seen him so angry,” says composer Hermann Rechberger, who shot the video.

Getting Creative With One Light