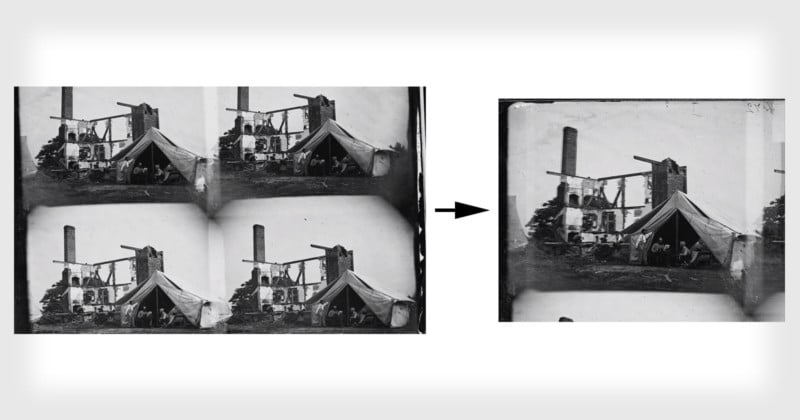 My name is Matt Loughrey, and I’m an artist based in Ireland. I occasionally work alongside libraries and museums with projects to develop their visitor experiences. Over time I have become familiar with a handful of photographers.

In 2015, I began to gather and organize glass negatives into groups on the strength after noticing that some libraries had failed to keep a number of glass negatives together. I told myself that some of them may have been dismissed as duplicates. I didn’t inquire as to why — instead, I began to research the anomalies myself and focused on the work of Mathew Brady and his associates.

It fast became a sub-project. I found out that Brady had been inadvertently animating his subjects. I am not referring solely to stereoview cards but instead to an accidental result when using his ‘multiplying’ cameras. Sometimes four or eight images were exposed to a single plate in order to provide a faster service which in turn, I assume, was cost-effective for Mathew Brady’s expanding enterprise.

The images would expose from slightly different angles, and this is where the story develops. I have spent a tremendous amount of my own time between 2015 and now solving the image puzzles in order to bring each subject to life, be they notable civilians of the 1860s, scenes or leaders of the time.

Ordinarily, each finished example takes 1.5 hours to align perfectly, reorder, and cycle in full resolution. All come directly from .tiff format scans and the process is undertaken entirely using my ever faithful Wacom MobileStudio Pro. I do not clean up the negatives themselves because I always felt that degradation at this level is comparable to the lines on our faces, it’s characterful.

The end result is this short 6-minute documentary, narrated by Dane Scott Udenberg, that examples some of what is possible and what details are revealed in these historical images, things that may ordinarily be missed:

In this case, technology bridges a gap between history and art while bringing a new sense of relatability and storytelling.

P.S. The projects mainstay is on Instagram at @my_colorful_past.

Editor’s note: You can find a large gallery of Civil War animations in this article by Patrick Feaster, another person who has worked on animating photos from this era.

About the author: Matt Loughrey is a 40-year-old artist based in Ireland. The opinions expressed in this article are solely those of the author. Loughrey’s work has been featured in National Geographic magazine.

Hello. My Name is Bob Locher, and I Am a Pixel-Peeper

Rooftop Photos of Tokyo at Night