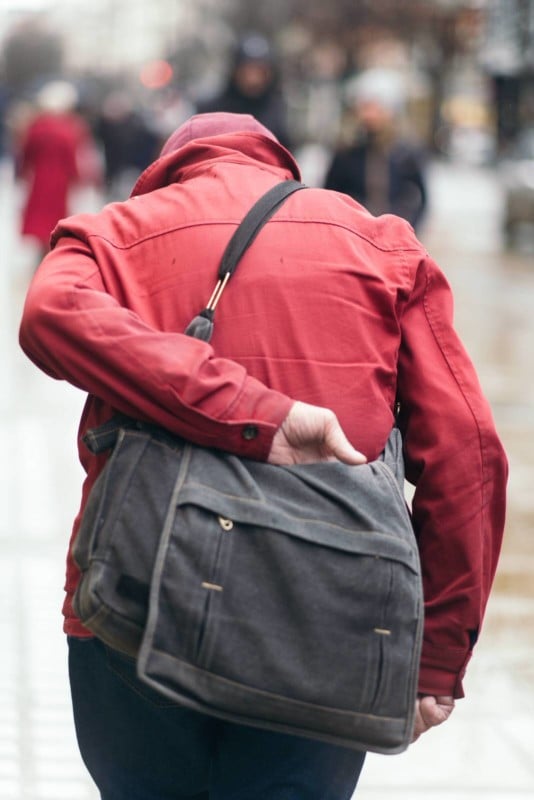 I recently shot this image while teaching a street photography workshop in London. I had been talking to my students about noticing things that were “odd” or out of place which normally makes for an engaging subject.

A few minutes later this man walked past us, heavily hunched over, and holding the top of his bag with his left hand. I liked him for his vibrant red jacket, and the odd positioning of his arm, so I took the picture and later shared it online. Within a few minutes, I received a comment that I had more or less been expecting: “people’s backs aren’t interesting.”

I’ve always thought that this was an odd criticism, and quite a specific measure to disregard an image entirely — although I do see where commenters like this are coming from. 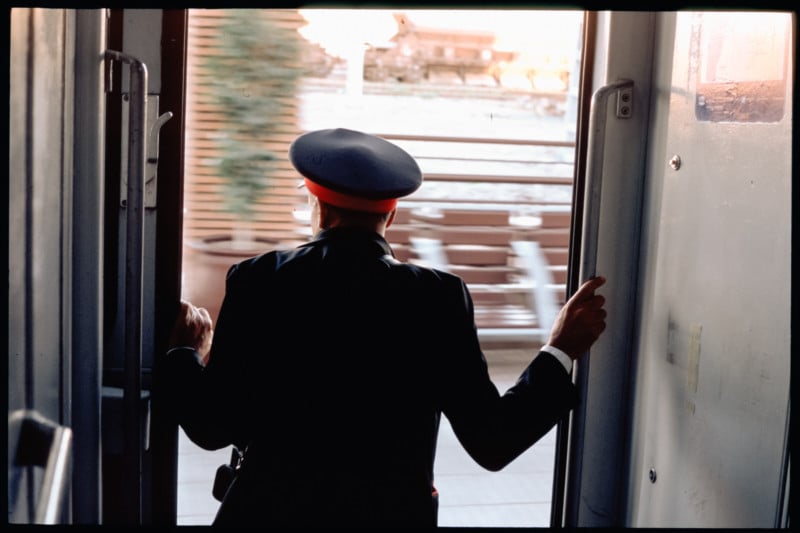 In street photography one of the most difficult issues to deal with is an image that incorporates someone’s face which involves issues like maintaining privacy or fear of confrontation (the idea that if you can see your subjects face, they must have seen you take the picture).

I see where criticism of photographs of people’s backs are coming from because of the implication that such a photo represents a fear that the photographer must overcome or a technique they must learn, and as such, “not photographing people’s backs” is not a critique so much as helpful advice.

To an extent, I agree with this. If all you are capable of or comfortable with is photographing people who cannot see you, then absolutely improve until you are able to incorporate characters from more than just this angle. 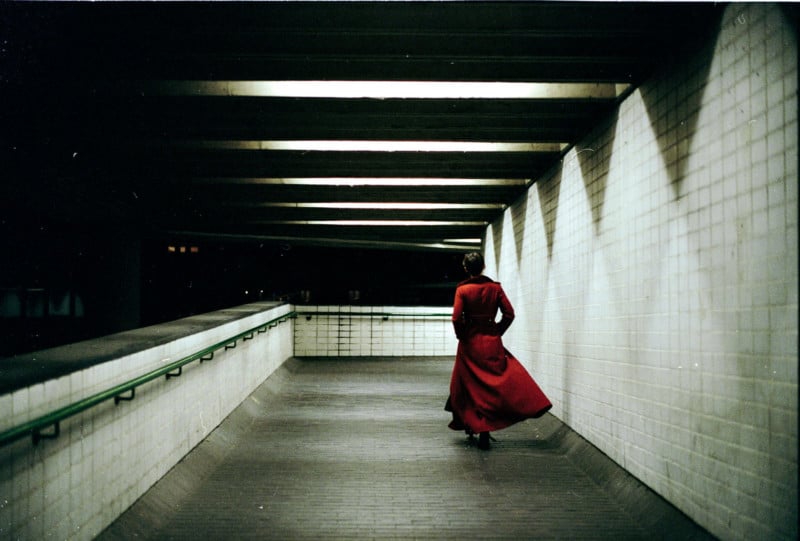 However, I disagree entirely with anyone who thinks that a person’s back is inherently uninteresting, and not worth photographing. I maintain that there is validity to images of anyone from any angle as long as they are well executed.

Of course, someone facing away will not be a classic portrait, but not every street image must be a portrait or involve a specific face in the first place. It is simply a different image. People can express just as much character depending on what they’re wearing, or carrying, or an action they may be performing that does not involve their face at all.

In street photography, the only element you have control over is where you position yourself in relation to the scene. Sometimes you simply cannot maneuver to incorporate a face and must make do with the aspects of people you do have access to. This is the kind of environment I most often work with when in crowds, although I prefer to hone in on someone specific, regardless of which direction they are facing. 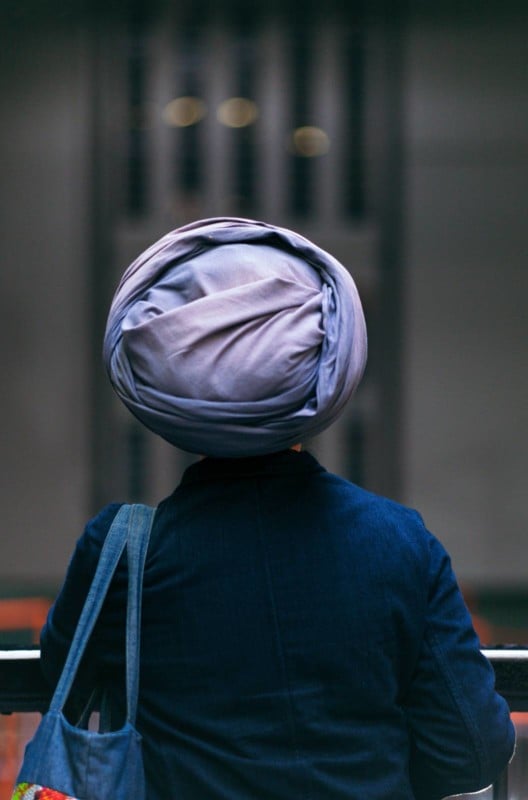 I think this also applies to silhouetted figures. Although I am making an effort in my photography at the moment for more even exposures I do think that silhouettes are a fantastic way to put a “blank slate” character into an image, which an audience can project themselves into. However the nature of a silhouette means that it doesn’t matter which way they are going in the frame – you cannot tell if you are seeing them from the back, front, or side – and yet they are used in images which arguably do engage the viewer. 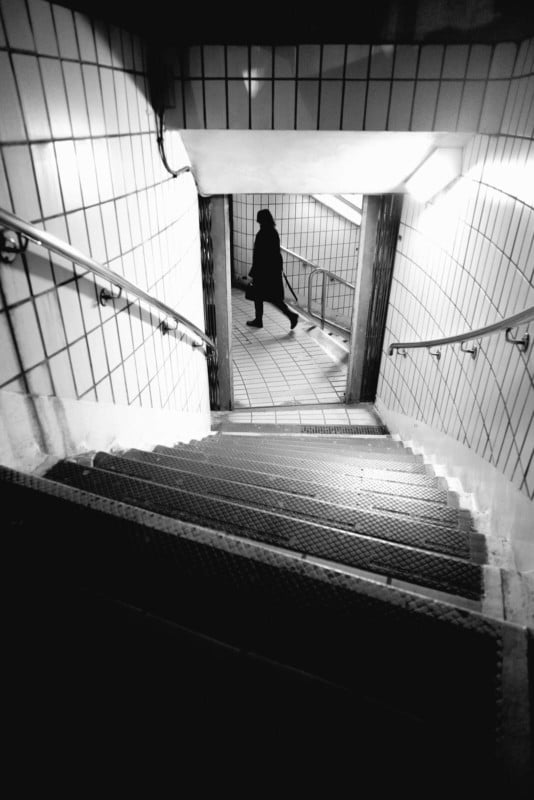 Just because someone is facing away from you doesn’t necessarily mean the image will be interesting, and just because they are facing toward you doesn’t mean it will be inherently more interesting. Interesting is subjective, so no subject or scene will ever be intrinsically interesting – it is the job of the photographer to highlight what they see and interpret that in an image.

The result of this can be a good or a bad execution – speaking entirely subjectively If I have chosen to photograph someone in a certain way, from a certain angle, then it means I saw something interesting in that moment and captured it. Maybe the back of their head was genuinely more interesting to me than their face. Not every street photographer is an opportunist, clicking the shutter out of convenience rather than interest. I think that it is disappointing to see people limit themselves and the things they allow themselves to see simply because they have a negative association around a certain subject-type rather than around the quality of execution around that subject. Shunning images in your own street photography and refusing to notice a detail simply because you are concerned that other people may not like it or may find it uninteresting or may not see what you saw is a damaging approach to growing as an artist.

Instead, I’d hope that you can develop to capture these details, to better show what you saw, to improve your eye to better identify the “best” details in a scene and to collect an audience of people who find those images as interesting as you do.

Profoto Accuses Godox of Stealing Its A1 Design for the V1