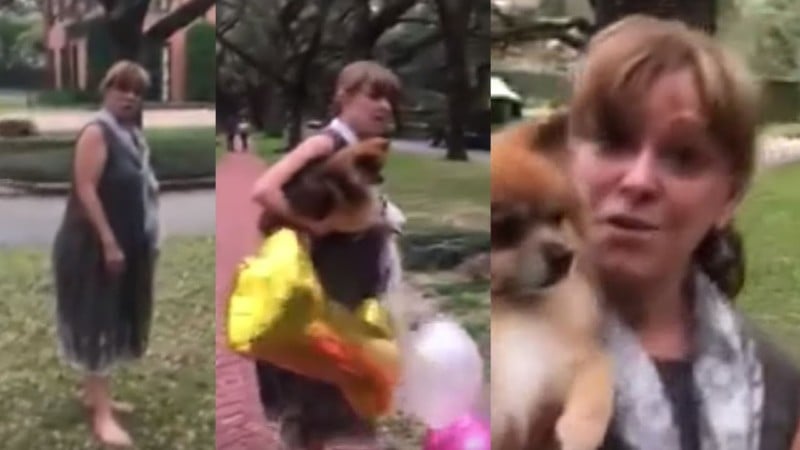 A prominent Houston socialite is the subject of a viral video this week after she was filmed losing her cool over a baby’s first birthday photo shoot on public property.

ABC13 reports that this past Saturday, Franci Neely, the ex-wife of Houston Astros owner Jim Crane, stopped her car, got out barefoot, and confronted a family that was doing a photo shoot to celebrate their daughter’s first birthday in a Broadacres esplanade popular among photographers.

Kelyn Alyssa shared her side of the story in a Facebook post and included a 3-minute video that was filmed of the confrontation.

“It’s a well known public trail where many people have photos taken,” Alyssa writes. “When we arrived there were several other photographers in the vicinity, working with their clients. Our photographer arrived and we began setting up. We set up on the path for the baby to sit with small props (to match the scale of the baby) and began taking our shots.”

Alyssa says that about 35 minutes into the hour-long shoot, her family suddenly heard shouting directed at them and turned to see Neely roll up in her blue Jaguar convertible.

“You are trampling the grass that WE pay for,” Neely allegedly shouted at the family.

Out of this light blue Jaguar convertible emerges this barefoot caucasian woman wearing a housedress, holding nothing but a cell phone and carrying her dog. She marches towards us and upon arriving, takes a look at my 11-month-old daughter and releases her unleashed dog, who at the time could not walk and was sitting peacefully on the pathway. In the midst of her shouting, I immediately and calmly asked her to restrain her dog as it made a beeline for the baby and it was coming dangerously close to my child. I actually crouched next to the baby and put my hand out to try to shoo this strange dog away. The lady begins shouting at us that we are on private property, and that she will not restrain her dog because she can do whatever she wants there.

I told her if her dog damages my child I will be pressing charges and she takes out her phone, starting to record me, asking me if I was threatening her. I repeated what I said. At this point her dog wandered away.

Our photographer calmly approached her to let her know that she was the one directing the shoot. The lady tells her that she brought “these” people into “her” neighborhood. The lady had no answer when asked why she did not approach the other photographers WHOM SHE PASSED ON HER WAY TO APPROACH US. Her lack of response prompted my husband to take out his phone to record what was going on.

At this point the lady stomps towards my baby and starts aggressively trying to remove the props placed around her, startling me. The baby, petrified by her aggression, started to scream and started crawling away from her into my arms.

Alyssa says a police officer later confirmed that the family was doing nothing wrong by doing their photo shoot on public property. She and her husband have filed a police report and say they’re planning to press charges against Neely.

After Alyssa’s Facebook post went viral with over 12,000 reactions and 20,000 shares, and after the story began making headlines in the media, Neely released the following apology to ABC13 on Monday:

The Broadacres Homeowners Association Invests lots of money paying to maintain the trees, grass and walkways in our neighborhood. The high volume of commercial photography damages the property that Broadacres HOA pays to maintain and interferes with dog walkers and others who merely want to walk under the pretty trees. We asked the commercial photographers to please stop.

I am very sorry that I got upset on late Saturday afternoon. Putting it in context, however: I saw three commercial photography shoots in one block at the same time, something that happens frequently. When I explained the situation to the first and third groups, they were respectful. The couple whose photo shoot obstructed the walkway was not. It’s hard to remain composed when confronted by shouted threats of lawsuits and false, inflammatory accusations.

The affluent Broadacres area in this latest dispute has actually been the subject of an ongoing battle between the Broadacres Homeowners Association and the City of Houston. The HOA banned photo shoots in late 2017, but Houston quickly overruled the HOA by stating that the esplanades are in the public right-of-way. The HOA continues to maintain that while the city owns the streets and sidewalks, the Broadacres Trust owns the meticulously maintained grassy areas.

For now, though, photography on the esplanades is legal and perfectly fine as long as the photo shoots don’t block the rest of the public from passing on the roads and sidewalks.

Is Bowens Really Back? Yes, And It’s Manufactured by Godox