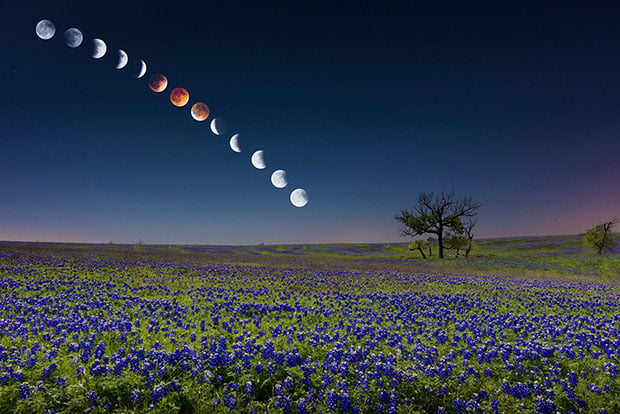 Over the past few years, I’ve become overly obsessed with photographing the night sky, so when I saw that we were going to be able to see the lunar eclipse on April 15, I knew I had to shoot it. I had been planning this shot for about two weeks before Tuesday morning.

With every lunar eclipse that occurs, my social media feeds blow up with shots of the moon, but they all seem to be extremely tight compositions. Don’t get me wrong, they are great shots for detail, but I’ve always felt they lacked a bit of… “life.”

With that said, I knew that I wanted to create a composition that not only showed the amazing eclipse, but tied in an incredible foreground as well. I mean, why not include the Earth? We are kind of the reason for the lunar eclipse, right?

With the spring wildflowers blooming all across Texas, they caught my eye for a potential foreground. I searched online for a large bluebonnet field somewhat close to home, but far away enough from the heavy light pollution of Dallas. After getting a few suggestions via social media, I took the ride down to Ennis, Texas — just southeast of Dallas — with fellow photographer friend James Langford.

I set out around 11 p.m. and spent the next 7 hours shooting the moon transitions. The first shot was the field of bluebonnets, shot at a 30 second exposure using the light from the full moon to illuminate the field. I shot this with my Nikon D800 at 24mm. Then, I shot the moon approximately every 10 minutes with a 200mm lens from the beginning to the end of its transition.

It was somewhere around 4 a.m., I was standing in the middle of this bluebonnet field, freezing my tail off (the pain isn’t so bad once you go numb) that I started to have doubts that the shot I had imagined wouldn’t come together. I wondered to myself, “What in the heck am I doing here?” The moon transition was taking a longggg time, and was much further up in the sky than I had hoped for. I still continued too shoot though and hope for the best. Things finally wrapped up around 6am, and then, finally… sleep.

In post, I started with the initial foreground image that I had shot and edited it to my liking. I then began the process of sorting through quite a few moon phase shots, pulling out one every so often to create the transition. Each phase was then masked in to the sky to create the final composition.

What you see in the image is a pretty close representation of the moons path across the sky throughout the night, just brought a bit closer to the horizon to help balance the composition.

You can find a larger version of the final photograph over on Facebook.

About the author: Mike Mezeul II is an award winning, professional photographer currently based out of Allen, Texas. His portfolio consists of professional sports, advertising, wedding and concert photography, but his work in landscape and skyscape photography truly separates himself from others. Visit his website here and Facebook here.